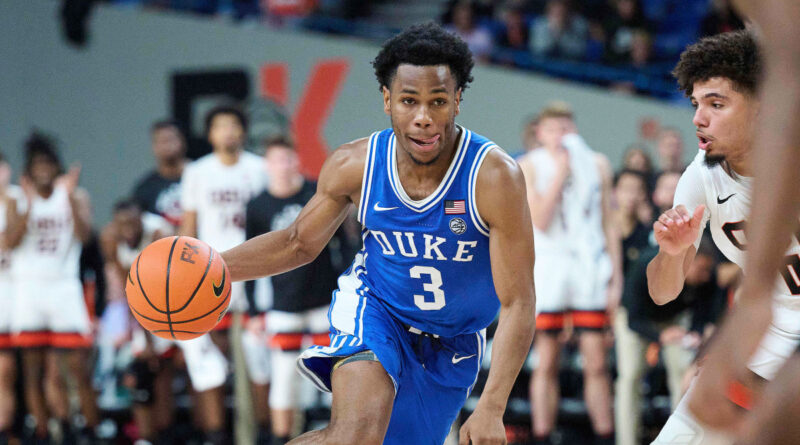 The championship matchups are set in both the Phil Knight Legacy and Invitational brackets in Portland after two days jam-packed with basketball: Duke vs. Purdue and Iowa State vs. UConn. The two-court setup in the Rose Quarter makes this feel like the most important AAU tournament ever, and for the most part we’ve gotten high-level games to live up to the billing of being one of the season’s highest-profile events.

Naturally, the championship matchups in both fields aren’t what one might have projected coming in, thanks to No. 1 North Carolina going down Friday afternoon and No. 6 Gonzaga losing Friday night. Still, these championship games have plenty of intrigue attached and will likely shape the way teams are viewed until at least conference play. Plus, who’s saying no to Gonzaga vs. Xavier and Alabama vs. North Carolina in the third-place games?

Here’s a look at what to expect from Sunday’s title games.

How They Got Here:

Duke was unimpressive in a Thanksgiving Day slugfest against Oregon State, barely escaping the lowly Beavers in a game it should have dominated on paper. The Blue Devils’ response Friday was much better: Duke led for more than 36 of the 40 minutes against Xavier, holding off second-half runs by the Musketeers and claiming a 71–64 win. The biggest difference in the two contests was the play of point guard Jeremy Roach, who had one of the best games of his career against Xavier with 21 points, five assists and just one turnover after shooting 3-for-14 against Oregon State.

Speaking of point guards, it was the coming-out party for Purdue freshman Braden Smith Friday in the Boilermakers’ impressive late-night victory against Gonzaga. Smith, somehow ranked outside the top 150 players in his class, played as polished a game as I’ve seen from a freshman this season and was the straw stirring the Boilermakers’ drink in an 84–66 win. Smith had 14 points, seven assists and five rebounds and impacted the game in so many ways, making huge plays in ball screens when Purdue sets broke down that showed maturity far beyond his years. That came after a wire-to-wire victory Thursday against WVU thanks to 24 points and 12 rebounds from Zach Edey.

Duke’s flow offensively has been a problem this season, but those issues have felt more prevalent at points this weekend. A big part of that is that the Blue Devils have had very little lineup continuity as they attempt to bring Dereck Lively II and Dariq Whitehead along slowly after offseason injuries, which will sort itself out in time. But the lack of a consistent knockdown shooter from the outside has hurt Duke offensively, which is why it was so huge to see Roach make shots against Xavier. Freshman shooting guard Tyrese Proctor is just 5-for-28 from deep this season, and while Mark Mitchell and Kyle Filipowski are capable of knocking down a three, they’re not the type of shooters that open up an entire offense. For Duke to reach its ceiling, it needs Roach and Proctor to be consistent both in setting up teammates and stretching the floor so that Filipowski, Lively and Ryan Young have more room to operate in the paint.

Purdue, meanwhile, has learned that its young backcourt is ahead of schedule. It’s one thing to do it in buy games or even a home matchup against Marquette, but Smith and Fletcher Loyer rose to the moment in a huge way against Gonzaga and looked like future all–Big Ten players. They’re both quintessential Purdue players: Smart, extremely skilled, willing passers and mature beyond their years. Point guard play and the backcourt generally was the main offseason question for a Boilermakers team with arguably the most dominant force in the sport in Edey, and the two freshmen have changed the game for Matt Painter’s club. Painter also pointed out Friday how much better this year’s group has been at executing scouting reports defensively than it was a season ago, something that was a major thorn in the side of an uber-talented Boilers team that lost in the Sweet 16.

How They Got Here:

No team in either bracket has been as consistently impressive in its two games here than UConn, which dominated Oregon on Thursday before pulling away late against Alabama Friday. The Huskies did it from deep against the Ducks, making 17-for-37 from three against an Oregon team with tremendous size that played zone for long stretches. Then, they held off a Crimson Tide run that tied the game midway through the second half by going on a decisive 21–2 run to distance themselves.

Iowa State has played a pair of thrillers thus far, needing overtime to get past Villanova in the quarterfinals before rallying past No. 1 North Carolina for an early season-defining win for T.J. Otzelberger’s club. ISU dominated the paint against Villanova, outscoring the Wildcats 40–16 down low. Then, the three-point shooting came alive against UNC, as veteran guard Caleb Grill exploded for seven triples that helped the Cyclones rally from seven down with less than four minutes to play.

UConn is one of the most complete teams in the country. Dan Hurley remade his roster this offseason with four transfers and two freshmen in the regular nine-man rotation, and every newcomer brings something different to the table. East Carolina transfer Tristen Newton has made a huge impact this week, flashing his scoring against Oregon with 23 points before dishing out eight assists against Alabama. Freshmen Alex Karaban and Donovan Clingan make all the right plays. And returners Jordan Hawkins and Adama Sanogo have raised their games, with Sanogo playing like an All-American. This UConn team has shooting, multiple high-level ballhandlers, star power down low and impressive chemistry.

Meanwhile, the biggest question coming into the year with Iowa State was whether the Cyclones would get good enough guard play to be back in the NCAA tournament. Those questions came even more into focus when projected starting PG Jeremiah Williams went down for the year in the preseason with an Achilles injury. But in the team’s first two high-profile games of the season, ISU’s guards have stepped up. They won’t get 27 points from Grill every night, but he’s a winning player capable of making a positive impact each time. The big revelation has been St. Bonaventure transfer Jaren Holmes, who has been asked to do more distributing than he did playing off the ball with the Bonnies and has been impressive.