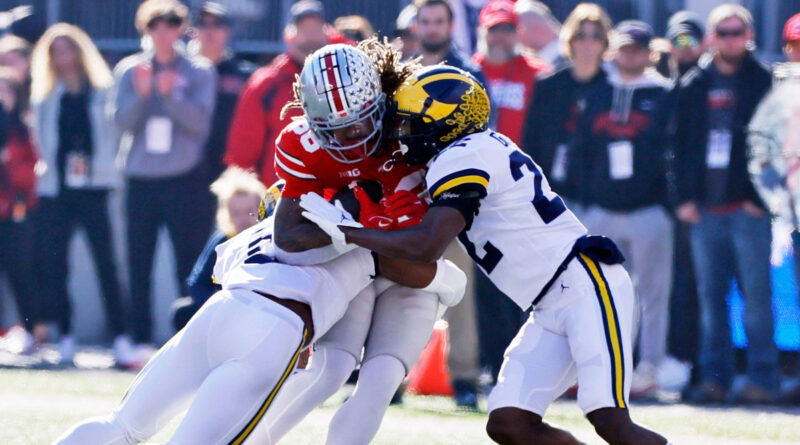 After dominating its schedule heading into Saturday’s regular-season finale against Michigan, Ohio State’s College Football Playoff hopes took a big setback after a 45–23 loss to the Wolverines.

Michigan (12–0) will remain within the top four once the latest CFP rankings are revealed Tuesday night. Ohio State (11–1) will more than likely drop out of the Playoff spot it’s held over the past month, pending what happens later Saturday—No. 4 TCU (11–0) takes on Iowa State, while No. 6 USC (10–1) hosts Notre Dame.

There are a few slim scenarios remaining for the Buckeyes to earn a bid, but Saturday’s 22-point loss differential and the lost opportunity to play in next weekend’s Big Ten championship are working against them.

TCU and USC can still chalk their way into the dance, but if they don’t, I am not really sure Ohio State should sneak its way in a la 2016 (without a division or conference title) after Saturday’s performance.

The circumstances in 2016 were substantially different for Ohio State. It lost a close matchup against eventual division champion Penn State by three points in October and had multiple opportunities to continue to impress the committee.

Meanwhile, Clemson‘s loss to rival South Carolina on Saturday—its second of the season—takes the No. 8 Tigers out of the Playoff running. Still lurking is two-loss LSU, which enters this week’s game with Texas A&M ranked fifth and has a win over Alabama on its résumé. No two-loss team has ever made the College Football Playoff, but the Tigers could potentially do so with a win over No. 1 Georgia in next Saturday’s SEC championship game.