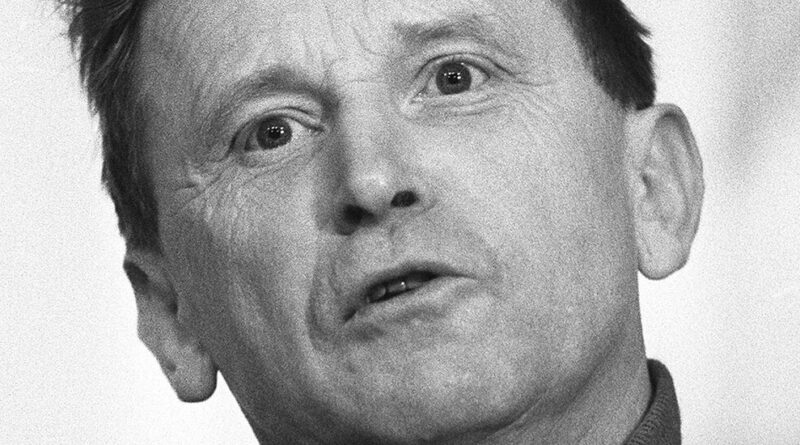 Jean-Marie Straub, a celebrated filmmaker aligned with the French New Wave who sparked critical debate with films he made with his wife, Danièle Huillet, that were known for their aggressively cerebral subject matter, Marxist leanings and anti-commercial sensibility, died on Sunday at his home in Rolle, Switzerland. He was 89.

“The Straubs,” as they were often called (although they preferred Straub-Huillet as a professional moniker) emerged in the 1950s from the same circle of revolutionary French filmmakers as Francois Truffaut and Jean-Luc Godard, a friend over the years who lived nearby in Rolle until his death in September.

Their 1981 documentary, “Too Early, Too Late,” for example, featured Ms. Huillet, in a voice-over, reading from a letter written by Friedrich Engels to the Marxist theorist Karl Kautsky about the economic despair of French peasants as seemingly unrelated footage of locations in contemporary France played onscreen.

The films’ source material often seemed plucked from a graduate-level syllabus, drawing from the likes of Bertolt Brecht, the novelist and literary critic Elio Vittorini and the operas of the atonal composer Arnold Schoenberg.

Critics, film theorists and discerning viewers held strong views of their work, which could be seen as either poetic or tedious. Their minimalist approach to editing, cinematography and acting demanded that “one be in a mood so receptive that it borders on the brainwashed,” as Vincent Canby wrote in The New York Times in his review of “Class Relations,” their 1984 interpretation of Franz Kafka’s unfinished novel, “Amerika.”

The film is now hailed as one of the most accessible and beautiful of the Straub-Huillet films, but Mr. Canby said the actors’ impassive line delivery sounded “as if they were giving instructions on how to put on one’s life jacket in case of an unscheduled landing at sea.”

To other critics, that steadfast commitment to an aesthetic was an artistic statement in itself. “Some movies want to be loved,” the critic J. Hoberman wrote in The New York Times reviewing a 45-film Straub-Huillet retrospective at the Museum of Modern Art in 2016. “Others prefer to be admired. And then there are the movies, like those by Jean-Marie Straub and Danièle Huillet, that, indifferent to love or admiration, are monuments to their own integrity.”

Despite a body of work largely confined to art-house theaters and museum screenings, Mr. Straub was awarded the Leopard of Honor lifetime achievement award in 2017 by the Locarno Film Festival in Switzerland, an award that previously went to the likes of Bernardo Bertolucci, Werner Herzog and Mr. Godard. (Ms. Huillet died in 2006). Richard Brody of The New Yorker wrote that Mr. Straub was “one of the least known of great filmmakers — he never had a hit or sought one.”

If audiences shifted uncomfortably in their seats, so much the better. To the combative Mr. Straub, filmmaking could be a revolutionary act. “If we hadn’t learned how to make films,” he once said, “I would have planted bombs.”

Jean-Marie Straub was born on Jan. 8, 1933, in Metz, in northeastern France, and was a film buff from an early age, showing an affinity for the films of Jean Renoir, Robert Bresson and Jean Grémillon.

He studied literature at the Lycée Fustel-de-Coulanges in Strasbourg, eventually earning his degree from University of Nancy. In the early 1950s, he organized a film club in Metz, to which he invited Mr. Truffaut, then a provocative critic for the seminal French film magazine Cahiers du Cinéma, and André Bazin, a Cahiers founder, to discuss films. (Mr. Straub began contributing to the magazine himself.)

He met Ms. Huillet in 1954, and the couple settled in Paris, where Mr. Straub began his film career as an assistant, working on movies like Mr. Bresson’s “A Man Escaped,” released in 1956. Two years later, to avoid conscription in the Algerian War, he fled France for West Germany. He and Ms. Huillet were married in Munich in 1959, beginning a long career as expatriate filmmakers working largely in Germany, Italy and Switzerland.

Their first short feature, “Not Reconciled” (1965), was adapted from a novel by Heinrich Böll, which dissects the growth and legacies of Nazism. The writer and public intellectual Susan Sontag later said the film had made her want to kiss the screen.

In 1968, the couple won international acclaim for their first full-length feature, “The Chronicle of Anna Magdalena Bach” (1968), which was a deconstructed version of a biopic of Johann Sebastian Bach.

Set in locations in Germany where Bach had actually lived and worked, the film offers a sparse narrative consisting of voice-over reminiscences from a fictional diary by Bach’s second wife (the text was written by the filmmakers). Much of the action, as it were, is provided by musicians in period costume performing the composer’s great works.

While the film baffled some critics in its day — A.H. Weiler deemed it “repetitious and static screen fare” in The Times — others, over time, came to see it as a masterpiece, a work of art “whose visual austerity, resolute slowness and refusal of conventional narrative were meant to advance a ruthless critique of capitalist aesthetics,” as A.O. Scott wrote in The Times in 2018.

As their reputation grew, Mr. Straub and Ms. Huillet continued to push boundaries over the decades. Their films “From the Clouds to the Resistance” (1979) and “Sicilia!” (1999) both premiered in the Un Certain Regard section at the Cannes Film Festival, a category reserved for artistically daring works.

Critics were less kind to their 1979 adaptation of “Othon,” a 17th-century French play by Pierre Corneille, which announced its intentions to confound with a 22-word title in English: “Eyes Do Not Want to Close at All Times, or, Perhaps One Day Rome Will Allow Herself to Choose in Her Turn.”

The film featured nonprofessional actors costumed as ancient Romans barking out the text of the play in an emotionally flat, rapid-fire fashion from the ruins of Palatine Hill in contemporary Rome, with the din of the modern city humming below.

Ever the utopian, Mr. Straub said he considered the target audience of “Othon” — about a Roman nobleman’s political ambitions amid calls for bringing power to the people — to be the modern proletariat.

“I would like to have ‘Othon’ seen by workers in Paris,” he was quoted as saying in a 1975 interview. “They’ve never been told that Corneille is impossible to understand.”

The film, he added, “threatens not just a class, but a clique of power.”

That clique of power apparently included critics at the New York Film Festival in 1970, half of whom bolted for the exit during the film’s press screening.

But perhaps that was the point. As Mr. Straub once put it, “We make our films so that audiences can walk out of them.”