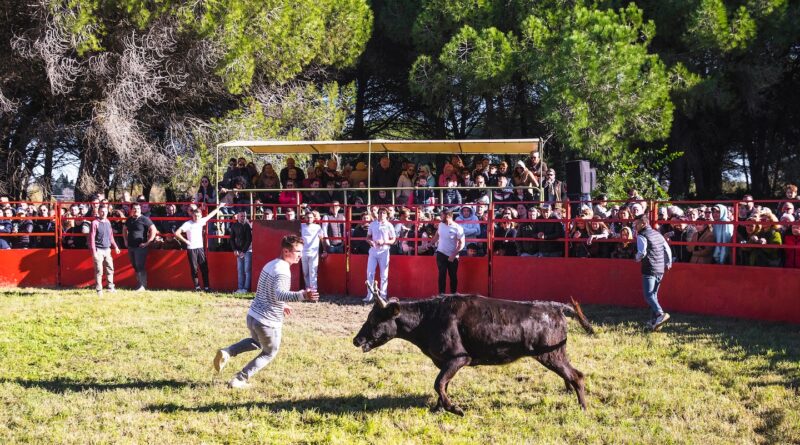 VAUVERT, France — The sound of horns clanging against a metal enclosure could be heard as hundreds of spectators arrived at a makeshift arena in a pine grove.

While adults indulged in bottles of wine, children bounced across an inflatable amphitheater on a plastic bull with blood-red eyes. Soon, Charles Pasquier would face off against a real bull. But the 26-year-old bullfighter appeared relaxed before the contest as he worked the crowd.

Ten years ago, an event like this wouldn’t have attracted many people his age, he said. But now “an enormous amount of young people are returning,” he marveled. “There’s a wave of renewal.”

Although these kinds of spectacles are in retreat in Spain and in Latin America, and although polls show as many as 77 percent of people in France want an end to bullfights, the sport is seeing a surge of popularity in southern France. On Thursday, the French National Assembly was expected to vote for the first time on a proposed ban. But opponents of the ban moved to obstruct the vote with a wave of amendments and the far-left lawmaker who proposed the ban withdrew it.

While the withdrawal does not rule out a vote in the coming months, even some animal rights groups admit the chances of a ban are slim, as politicians across the political spectrum fear a rural voter backlash.

A parliamentary law commission, backed by members of President Emmanuel Macron’s party, recommended against a ban last week. “What will be the next regional tradition that we will outlaw?” lawmaker Marie Lebec asked during the initial debate.

On Wednesday, Macron suggested to an audience of mayors that there wouldn’t be a ban anytime soon. “We must move toward a conciliation, an exchange,” he said. “From where I stand, it’s not the priority at the moment. This subject must progress with respect and consideration.”

Up for debate was whether France’s animal welfare law should be amended to remove exemptions for bullfighting and cockfighting in places where they are “uninterrupted local traditions.”

Critics question the notion of bullfighting as inherently French. Although there’s a record of bull running in France 1289, the bloody Spanish-style corrida, critics note, was imported in the 19th century for the benefit of the Spanish-born wife of Napoleon III.

For a time, the contests prospered across France. Major bullrings were erected in Bois de Boulogne park in Paris and in other cities. But it’s only in southern France, near the border with Spain and along the Mediterranean, that bullfighting continues today, drawing about 2 million spectators each year, according to the National Observatory of Bullfighting Cultures.

Animal rights activists say the practice has no place anywhere in modern times. The bulls, they say, which are repeatedly stabbed in the neck and shoulders, die slowly and painfully. Between 800 and 1,000 bulls are killed in French contests each year.

The one time Nathalie Valentin attended a bullfight, she said, she was so shocked she ran out of the arena. “After every stab, the bull reared. It was horrible,” said Valentin, 56. “I didn’t understand why people had come to watch it.”

But she’s in the minority who are willing to speak out against the practice in her hometown of Nîmes, France’s de facto bullfighting capital. When activists organized anti-bullfighting demonstrations across the country last weekend, fewer than 50 people showed up outside the city’s Roman amphitheater, where the local bullfights take place. The activists struggled to attract the attention of pedestrians as they held aloft posters of dead bulls. Their speeches were at times drowned out by a motorcyclist who deliberately revved his engine.

Earlier in the day, a pro-bullfighting demonstration a few blocks away had drawn about eight times more people. In many towns, the rallies in favor were organized or attended by mayors, suggesting broad public support.

The mayor of Mont-de-Marsan, Charles Dayot, complained to AFP that the far-left lawmaker who pushed the vote “in a very moralizing tone, wants to explain to us, from Paris, what is good or bad in the south.”

A similar sentiment — about Paris vs. the periphery — was behind the “yellow vest” protests that rocked French politics in 2018 and 2019. And that sentiment may have been on the minds of lawmakers when they considered the bullfighting ban.

“If a referendum were to be held, it is likely that the yes vote for a ban on bullfighting would win,” acknowledged Frédéric Saumade, an anthropologist who is in favor of the contests. But to him, the French government has a duty to uphold regional rights and traditions, even if the broader public doesn’t support them.

The festivalgoers in Vauvert last weekend maintained that bullfighting was part of their identity — and they wouldn’t let it be taken away easily.

“It’s the way we are. And it’s how I want my children to live,” said Jade Sauvajol, 22. Bullfighting, she added, is part of “the first step of socialization here.”

“It brings people together,” said Benjamin Cuillé, co-president of the union of French bullfighting youth.

With the failure of the bullfighting ban, southern France has cemented its status as one of the sport’s last bastions. In Spain, the country that exported its bullfighting traditions to France, the number of contests has almost halved in recent years, and the practice has been abandoned in the region of Catalonia. In Latin America, a combination of court rulings and withdrawal of sponsors this year also forced the closure of bull rings in Bogotá and Mexico City among other places.

Bullfighting in France appears to be going in the opposite direction. Nîmes recorded a rise in spectators heading to the contests this year compared to 2019, even while cinemas and nightclubs remain up to a third emptier than before covid-19.

Bullfighter Alexis Chabriol, 21, said he was raised in a family opposed to the contests. But he decided to attend one to form his own opinion. “I found it really beautiful,” he said, despite all the blood.

The Spanish-style corrida is the form that’s most widely known: the one with bullfighters using colored capes to draw the attention of the bull, usually aiming to kill, while impressing the audience with their daring.

But bullfighting contests don’t have to end in blood. In fact, there was no blood at all last weekend in the Vauvert arena.

The bulls that participate in corrida fights are expensive, so organizers tend to reserve the real spectacles for audiences of thousands, rather than hundreds. Instead, Pasquier performed in a mock Spanish bullfight known as a “tienta,” which is also used to train and select bulls for the big fights. Neither he nor the bull were injured when they left the ring.

Then came the Camargue contest, named after the region where it is practiced. A cadre of participants competed in trying to pluck ribbons attached to the horns of not a bull, but a local cow. She kicked up grass and mud as she groaned and chased after the men. Sometimes they jumped out of the way only seconds before the cow rammed into the arena’s metal barriers.

Camargue fights wouldn’t have been banned under the proposed law. They tend to be more dangerous for the human participants than for the animals. By the end of Vauvert festival, while some men limped, nobody appeared seriously injured. An on-site ambulance wasn’t needed.

Polls shows that in the French towns where bullfights are held, more than 60 percent of residents may be opposed to bulls being killed. But southern France’s bullfighting advocates say there’s no room for compromise. They want to preserve the tradition in all its forms.

“Death is part of life,” said festival organizer Thomas Pagnon, who heads a youth organization in defense of bullfighting and other traditions.

Lionel Lopez came to the Vauvert festival with his 6- and 11-year-old sons, who lowered a pink cape into the arena, trying to get the animals’ attention.

For the boys, these were neither the first nor the most violent fights they had seen. Lopez said he initially planned to slowly accustom his sons by shielding them from the most extreme versions of bullfighting. But after going to a mock contest, his youngest son asked to see a “real bullfight.”

Having been introduced to the tradition at an early age, Lopez said, his 6-year-old now “sees the beauty of the spectacle.”