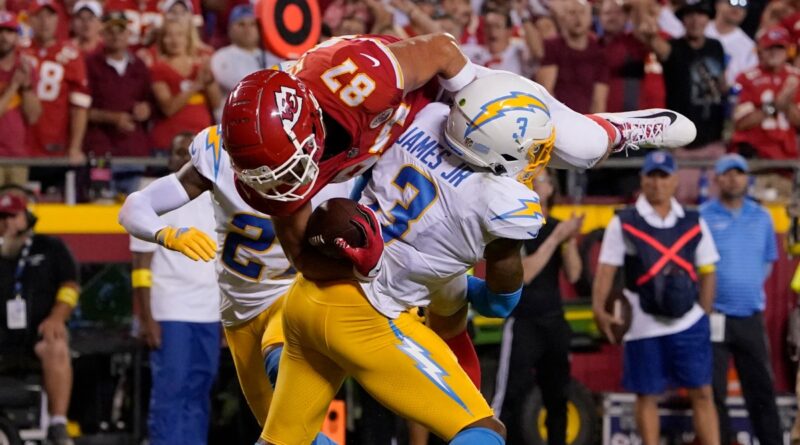 As the great racing champion Ricky Bobby once said: “I’m flying through the air, this is not good.”

That’s more or less exactly what went through the mind of Chiefs tight end Travis Kelce last Thursday, when Chargers defensive back Derwin James body slammed him to the turf in one of the game’s most memorable plays. Kelce was thankfully alright after the violent throw-down, and offered an entertaining perspective of the play earlier this week on his podcast, New Heights, that he hosts with his brother, Jason.

“I made a cut back and then all the sudden he is on me like lightning. I mean, he surprised the s— out of me,” Kelce said. “Lower man always wins in football … When I felt him wrap his arms around my legs, I’m chuckling in my mind. I’m like, ‘This is not about to end well for me right now.’”

The Kelce brothers certainly got a good chuckle at the play, with Travis alluding to similar types of moves being performed on him growing up (“It’s not my first time getting power bombed”). He also revealed what James said to him after the play, showing that there were no hard feelings from either side.

“The body slam was funny, but what was even more comical is the fact that he asked me after the play, or after that drive, ‘Bro, you good?’” Kelce recalled. “What a great guy, man. What a great guy.”