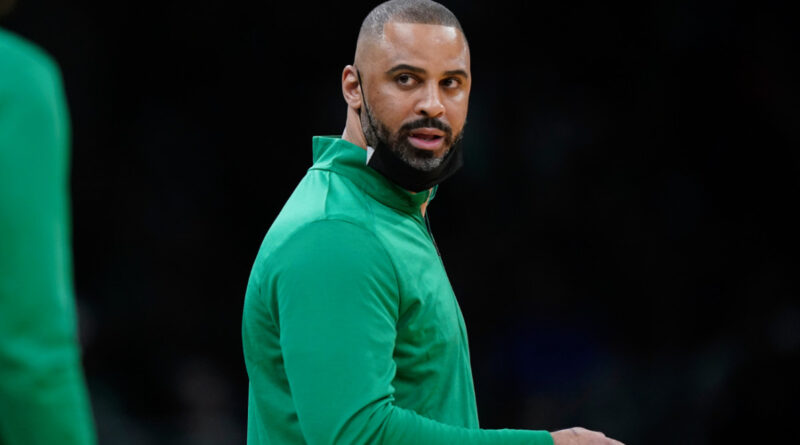 Celtics coach Ime Udoka has been suspended for the entire 2022–23 season, the team announced Thursday night. The moves comes in the wake of a report about his alleged involvement in an “improper” consensual relationship with a female member of the team’s staff.

The Celtics released a statement confirming Udoka, 45, received the year-long suspension for “violations of team policies” and noted a decision will be made on his future with the club beyond the upcoming season “at a later date.” The suspension will go into effect immediately, per the team.

In a statement shared on Twitter by ESPN’s Malika Andrews, Udoka issued an apology to Celtics players, the organization and fans for his actions.

“I want to apologize to our players, fans, the entire Celtics organization, and my family for letting them down,” Udoka said. “I am sorry for putting the team in this difficult situation, and I accept the team’s decision. Out of respect for everyone involved, I will have no further comment.”

Shortly after the announcement, Sports Illustrated’s Chris Mannix provided an update on Udoka’s status. Mannix reported there were “no guarantees made to Udoka” about being brought back after the suspension.

In the hours since the news surfaced, Wojnarowski reported Udoka was “likely” to be suspended for the entirety of the upcoming season due to the relationship. Mannix reported Thursday the looming discipline led Udoka to consider stepping down from the position, though TNT’s Chris Haynes later reported Udoka would not be resigning despite the allegations.

As of Thursday night, the details of Udoka’s actions remain unknown.

With Udoka’s suspension now official, assistant coach Joe Mazzulla is expected take over as interim coach. Mazzulla, one of Boston’s top assistants, has never held a head coaching job in the NBA, and has previously served as the coach of the Celtics’ Summer League team.

Udoka, who played seven NBA seasons before retiring in 2012, took over as Celtics coach following stints as an assistant with the Spurs, 76ers and Nets. Udoka filled the role before the ’21–22 season after Stevens, Boston’s coach for eight seasons, transitioned into a role as president of basketball operations following Danny Ainge’s brief retirement. The first-year coach led the team to a second-place finish in the Eastern Conference in the regular season and the team’s first appearance in the NBA Finals in 12 years.