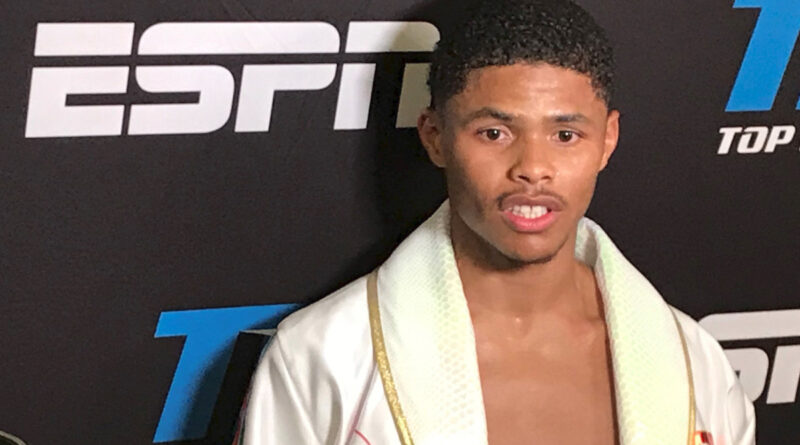 Rising star Shakur Stevenson announced Thursday his plan to move up in weight class after failing to make weight ahead of his scheduled title defense on Friday night.

The reigning WBC and WBO super featherweight champion had been set to defend his 130-pound titles against Robson Conceição (17-1, 8 KOs) at the Prudential Center in Newark, Stevenson’s hometown, but was forced to vacate the belts after weighing 131.6 pounds during Thursday’s official weigh-ins.

Fight officials granted Stevenson (18-0, 9 KOs) a two-hour window to shed the weight but the Top Rank fighter refused, later saying in a tweet, “My health comes first,” before sharing he has decided to move up to the 135-pound division.

“I gave it my all,” Stevenson wrote. “I’ve been professional my whole career and made weight, but my body just can’t make 130 anymore. My health has to come first.”

According to ESPN’s Mike Coppinger, Top Rank is currently seeking a resolution so the fighters can still meet in the main event; should the bout proceed, only the 33-year-old Conceição, who weighed in at 129.6 pounds, would be able to walk away with the belts should the 2016 Olympic gold medalist emerge victorious.

ESPN also reported Stevenson is expected be fined by the New Jersey State Athletic Commission and will likely have to forfeit some of the $3 million fight purse he’s expected to earn in order for the fight to proceed.

Stevenson, 25, last fought in April in a lopsided unanimous decision over Óscar Valdez to win the WBC and vacant The Ring super featherweight titles. He previously claimed the WBO belt after earning a 10-round TKO victory over Jamal Herring in Oct. 2021.

A 2016 Olympic silver medalist, Stevenson now moves on from the division he’s dominated to begin his career to a new challenge and slate of opportunities. Stevenson, whom Sports Illustrated’s Chris Mannix ranked No. 7 in his latest pound-for-pound rankings in August, figures to be in the mix for high-profile bouts against fellow Top Rank boxers Devin Haney, the undisputed lightweight champion, and Vasiliy Lomachenko at 135 pounds.