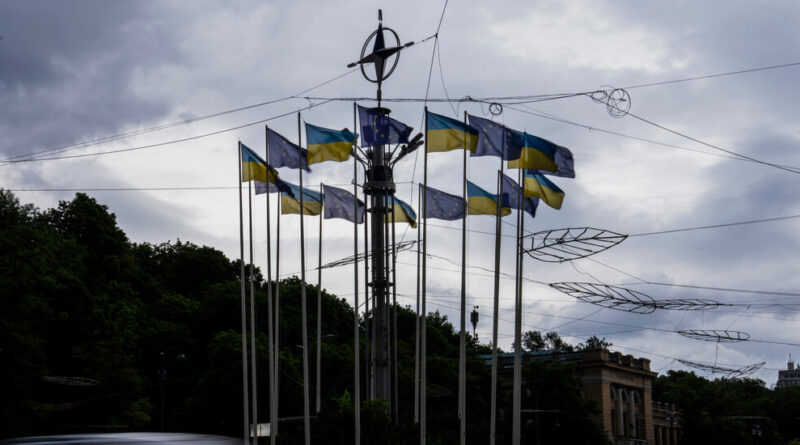 The E.U. officially made Ukraine a candidate for membership yesterday, a step that even weeks ago seemed impossible. While it could take a decade or more for Ukraine to actually become a member, the E.U.’s decision sends a powerful message of solidarity to Kyiv and a rebuke to Moscow.

Candidate status signals that a nation may begin a painstaking, time-consuming process of internal changes and negotiations with the E.U., with a view to eventually joining. The country must align itself institutionally, democratically, economically and legally with E.U. laws and norms, a process that has taken some countries about 10 years. Others, like Turkey, have been candidates for much longer and have yet to join.

Ukraine’s candidacy is bound to irritate Russia, which has described Kyiv’s aspirations to align itself with institutions like NATO and the E.U. as Western attempts to interfere in its rightful sphere of influence. The move signals a belief on the part of E.U. states that Ukraine’s future lies in an embrace of the democratic West.

Moscow: Asked last week about the prospect of E.U. candidate status for Ukraine. Vladimir Putin, the Russian president, said, “We have no objections.” Since then, Russian officials and analysts have said that he didn’t really mean it.

In other news from the war:

‘I did not expect to survive’

Villages across Paktika Province in Afghanistan’s southeast were devastated by the 5.9-magnitude earthquake that struck early Wednesday — the country’s deadliest in two decades.

As rescue efforts unfolded, vehicles laden with supplies made their way over rugged, unpaved roads to hillside villages strewn with wrecked houses. Relief officials said yesterday that they were now focusing on the survivors, who had endured not only heavy rain but also unseasonably frigid temperatures that threatened to bring snow to some areas.

Afghan officials in the hardest-hit areas estimated Wednesday that at least 1,000 people had been killed and 1,600 or more injured. Yesterday, the U.N. offered a slightly lower estimate — 770 people killed and 1,440 people injured — but cautioned that its figures were likely to rise.

First person: Hawa, a 30-year-old mother of six, felt the walls collapsing on her — then everything went dark. “I did not expect to survive,” she said from her hospital bed. Her village, Dangal Regab, like many others in the region, was a tableau of death and destruction.

A looming energy crisis in Europe

As tensions between Europe and Russia over energy continue to mount in the wake of the invasion of Ukraine, European nations are rapidly pumping natural gas into storage chambers, hoping to moderate stratospheric prices, reduce Moscow’s political leverage and head off the possibility of shortages this winter.

Gazprom, the Russian state-controlled energy giant, last week cut by more than half the amount of gas it delivers via the pipeline Nord Stream 1, which serves Germany and other countries. Germany responded by triggering the second stage of its three-step emergency gas plan. The German government has also called on consumers and companies to conserve gas.

The reduction in supplies to the German pipeline, which also affected flows to countries including France, Italy and the Netherlands, dashed any remaining hope among European leaders that they could count on Russian gas, perhaps the most difficult fuel to replace. Analysts say Moscow will probably continue to use gas for maximum leverage.

By the numbers: Since May, the E.U. has required member states to fill their storage facilities to at least 80 percent of capacity by Nov. 1. Overall European storage levels are at 55 percent. Gas prices are already about six times what they were a year ago.

The 0.5 selfie, taken with an ultra-wide-angle lens that can make subjects look “distorted and crazy,” isn’t fussed over. These snaps have become a mainstay of Gen Z documentation, showing up on Instagram, proliferating in group chats, becoming the talk of parties and often simply capturing the minutiae of daily life.

Louis Theroux, 52, is hardly an obvious hip-hop sensation. Yet a short rap by Theroux, a bookish British American documentary filmmaker, is storming the internet. If you’ve been on TikTok, you’ve probably heard the hook: “My money don’t jiggle jiggle, it folds.”

The song was born in 2000, on “Louis Theroux’s Weird Weekends,” a BBC series in which he delved into various subcultures. Reese & Bigalow, a rap duo in Jackson, Miss., helped whip the song into shape. But it took off this year, when Theroux recited the rap in an even deadpan on the popular web talk show “Chicken Shop Date.”

That clip has inspired D.J.s and dancers alike, prompting legions of videos of the same languid moves. Stars like Shakira, Snoop Dogg and Megan Thee Stallion have all danced to the track. Theroux, not wanting to miss the moment, has rerecorded it. “I sincerely hope we can all make some jiggle jiggle out of the phenomenon. Or maybe some fold,” he said.