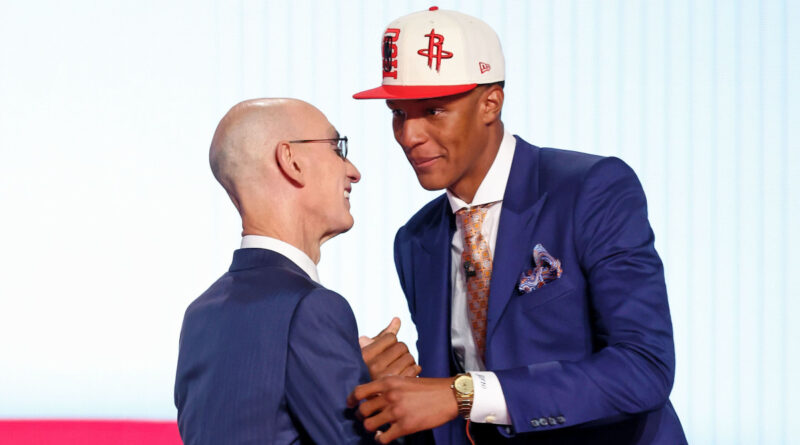 Well, that’s not what anyone except Jeff Weltman expected. Orlando’s president basketball of operations pulled off one of the biggest draft-night surprises in recent memory when he selected Paolo Banchero with the No. 1 pick on Thursday, adding a dose of chaos to an otherwise tame evening. Will Weltman’s move pay off? We’ll have to wait a few years on that one.

While we need to hold off on grading Weltman’s move, it’s not too early to take out our crystal ball for the 2022 draft class. Intrigue abounds outside the top three, where unexpected results continued with Sacramento at No. 4. So which draft-night moves could result in impressive rookie seasons? Let’s get the prognosticating started with our favorite landing spots for the newest rookies.

Houston’s latest lottery pick should slide in as a seamless complement to Alperen Sengun, providing pick-and-pop spacing while serving as Houston’s defensive anchor in the frontcourt. Perhaps Smith still has room to grow as an off-the-dribble and back-to-the-basket scorer, but he should have no trouble adjusting to the NBA three-point line. He’s as polished a big-man shooter as we’ve seen in recent memory, with the natural talent to lead some explosive offensive exhibitions at the Toyota Center alongside Jalen Green.

Banchero and Jabari Smith felt like more natural fits in their presumed landing spots before Thursday evening, adding further intrigue to Orlando’s surprising move. As for Oklahoma City, it appears as though the Thunder got their man.

Let’s set aside the conversation regarding Holmgren’s contribution to another potentially tanktastic campaign in 2022–23. Holmgren’s historic length and defensive versatility fits right into the Sam Presti blueprint of roster building, and Holmgren’s new teammates should help speed up the incoming offensive learning curve. Shai Gilgeous-Alexander is one of the league’s most effective guards driving to the rim, and Josh Giddey sports the vision of a 10-year veteran. Holmgren should be able to live on pick-and-pop triples. Oklahoma City’s guards will reward Holmgren as he gallops down the floor in transition. And even if the offensive development is slow, we should see Holmgren competing for All-Defensive teams sooner than later. When debating the floors among the top-three players, it’s hard not to view Holmgren’s defense as a major leg up.

Holmgren is a prospect we’ve never seen before. It’s only right he lands in the middle of Oklahoma City’s strange experiment.

Sacramento eschewed drafting yet another point guard at No. 4, leaving Ivey to slip to the Pistons at No. 5. And though Cade Cunningham is locked in as Detroit’s leading man of the future, he and Ivey could make for an electric offensive duo. Ivey provides the Pistons with some much-needed downhill burst, and the Purdue product should be free to let his athleticism shine without the burden of major playmaking responsibilities.

It’s frankly a credit to Cunningham that the Pistons can feel so comfortable sliding Ivey into their backcourt. Last year’s No. 1 pick is as mature as they come as a lead initiator, and he was consistently lauded as a rookie for his demeanor and focus. Landing Cunningham allowed Detroit to anchor its rebuild. Ivey could truly launch things.

Daniels should be able to make an impact early on as a bit of a swiss-army-knife piece for the Pelicans. He projects to be a capable defender of both quicker guards and larger wings, and he’s an unselfish offensive player who processes things quickly. It’s easy to envision Daniels finding Zion Williamson for lobs and providing a playmaking spell for C.J. McCollum, potentially filling the role Lonzo Ball vacated before last season. The Pelicans seem to be turning a corner after a rocky stretch. Daniels could be a valuable part of an impressive next era in New Orleans.

Charlotte struggled to combat a significant hole in the interior of its defense last season. Williams could play a major role in rectifying such a problem. The former Duke center is 7’2” with an already-developed frame, and he’s relatively light on his feet for a player of his size. One added bonus: Williams isn’t a total stiff with the ball. He’s a heady interior passer, with a feel for the game that will fit right in alongside LaMelo Ball. Perhaps Charlotte didn’t need to enter the trade market to find its center of the future.

Jeremy Sochan’s defensive aptitude and sheer toughness makes him an immediate fit with the Spurs, yet I’m a touch more enamored with San Antonio’s pick outside the lottery. Branham can provide a scoring punch desperately needed in San Antonio’s backcourt, entering the NBA after averaging 20 points per game across his final 10 contests at Ohio State. Branham is just 19. He’s shifty in the lane and a good tough-shot maker. He’s worth the investment at No. 20.

It’s no guarantee Beauchamp is able to crack Milwaukee’s rotation in his rookie season, but he could become a valuable player as the Bucks look to build a young core to supplement the next phase of Giannis Antetokounmpo’s prime. Beauchamp is a 6’6” wing with greater length and impressive defensive instincts, and there’s certainly time for him to develop a consistent jumper. It’s for the best Beauchamp landed somewhere he can grow with a veteran staff and roster. The right tutelage could lead to a quality career throughout the 2020s.

Jovic could quickly become a fan favorite in Miami as he makes a name for himself as an impact piece off the bench. Jovic is a potential microwave scorer who sports a sweet shooting stroke at 6’11”, and he’s more than a stationary shooter. Jovic can make plays off the bounce and he has a real unselfish streak, and while his defense leaves a lot to be desired, the Heat are no stranger to hiding a defensive liability. Jovic will likely get his chance to earn minutes alongside Jimmy Butler and Co. at some point in 2022–23.