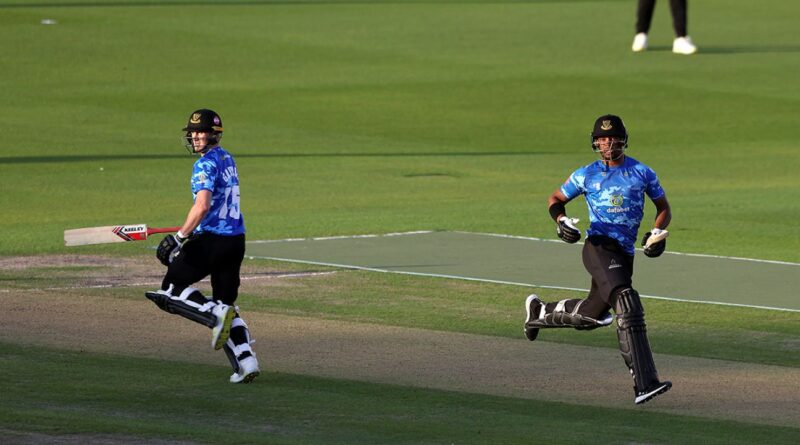 Surrey lost for the first time in this season’s Vitality Blast as Sussex Sharks halted a run of five successive defeats in the South Group with a welcome 17-run win at Hove.

Opener Will Jacks looked to be leading Surrey to a target of 173 when he took his aggregate in this season’s competition to 396 runs with 76, his fifth fifty of the campaign and two days after his unbeaten 66 helped secure a last-ball win over Somerset.
But when he was caught behind trying to guide a quicker ball from left-arm spinner Delray Rawlins into the off side in the 15th over, having hit 11 fours and a six, Surrey’s lower order folded quickly and they were bowled out for 155 in 18.2 overs, their first defeat in any competition this season.
Skipper Chris Jordan, their last recognised batsman, was run out by Ravi Bopara‘s throw from the covers after being sent back and Surrey’s last five wickets fell for 16 runs, Bopara finishing things off with another direct hit to run out Dan Moriarty.

Sussex’s fourth win out of 11 was much needed, although they will need to win their three remaining games to have any chance of reaching the knockout stages.

Their 172 for five, having been put in, was inflated at the end by a crucial stand of 60 from the last 27 balls between Rawlins and George Garton, who was playing his first game since June 1 as he continued his recovery from long Covid.

Earlier, Harrison Ward, promoted to open, was caught off a leading edge in the last over of a powerplay which yielded 46 runs, and Mohammad Rizwan and Ali Orr‘s partnership was just starting to blossom when both departed in the space of three balls in the 11th over.

Orr got a thin edge and was caught behind for 30 while Rizwan, who had progressed ominously to 48, was beaten by Jordan’s direct hit from mid off when he changed his mind about a quick single and slipped as he tried to make his ground.

Gus Atkinson, one of seven bowlers used, picked up his second wicket when he bowled Tom Alsop around his legs and Bopara mis-timed a ramp shot in the 16th over before Rawlins and Garton dragged it back for Sussex.
Jacks and Jamie Smith launched the reply with 53 off 29 balls and although Smith and Nico Reifer departed in the space of five balls it failed to halt Surrey’s momentum as Jacks and Laurie Evans added 57 off 33 to seemingly break the back of the chase.

But Sussex kept plugging away. Evans was well taken by Ward at long on off Tymal Mills, Sunil Narine swung Rashid Khan out of the ground but departed to the next ball trying to repeat the shot and Rory Burns was lured out of his ground by Rawlins as Surrey endured their first wobble, losing three wickets in ten balls.

Jacks and Jordan appeared to have restored some calm to the chase, but after Jacks departed Sussex calmly closed the deal.