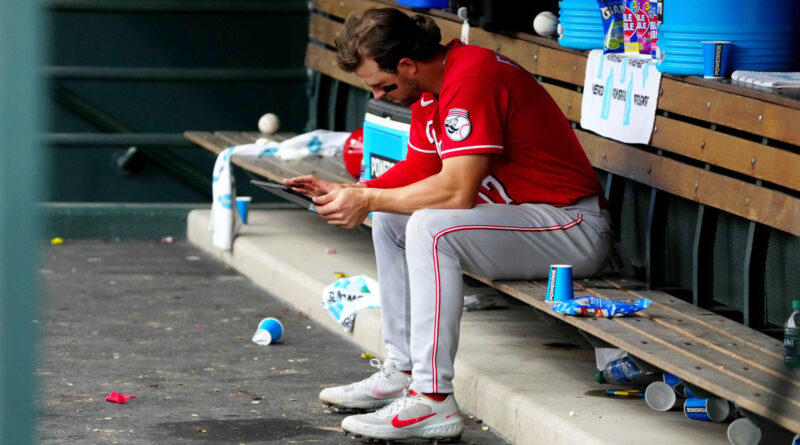 CINCINNATI — For righty Hunter Greene, the hardest part of the Reds’ putrid start to the season was the night last week when he gave up eight runs and got eight outs. For second baseman Jonathan India, it was watching from the dugout, his right hamstring aching, as his team dropped game after game. For shortstop Kyle Farmer, it was the moment, in the midst of 34 at bats without a hit, he found himself standing in the shower, dressed in his cap, uniform and cleats, “trying to wash all the demons away,” he says.

Winning is a communal experience. Losing is a collection of tiny, individual tragedies. And so far this season, Cincinnati has done a lot of losing. The team’s 9–24 start puts it on pace to lose 117 games, which would be the third worst season since the start of the 20th century. The Reds’ team ERA is last in the majors at 6.29; the Pirates, the next worst pitching team, have a 4.89 ERA. Recently, those Pirates have done their part to mask at least some of the ugliness. Cincinnati has its won three straight games, and six of its last eight, with five of those wins coming against Pittsburgh, another of the league’s worst clubs. At this time last week, following Greene’s shellacking and the last game before they played Pittsburgh, the Reds were 3–22, on pace to finish with a 20–142 record, which would’ve been eight more losses than the 1899 Cleveland Spiders—the worst team ever. At one point Cincinnati went 99 innings without holding a lead.

The Reds can’t possibly maintain this level of futility. But it’s only May. There are four and a half months to go. How can they keep putting themselves through this?

“I think baseball is the worst drug possible.” Farmer says. “Once you reach the high points in baseball, you know that it’s there, and you want to keep chasing that high moment—rush, you could say—and when you have a bad moment, you think you can get better. That’s what makes you keep coming back to the baseball field.”

They got a taste of that this week, when in front of dozens of fans, they took two out of three from the first-place Brewers. But even those games offered reminders of how flawed the team is: On Monday, No. 1 starter and possible trade candidate Luis Castillo, making his season debut after a sore right shoulder sidelined him, saw his velocity drop between 2 and 3 mph on every pitch from last year. And Wednesday, Milwaukee scored six runs in the top of the ninth to turn a laugher into a close game.

This roster has not been put in a position to succeed. The Reds went 83–79 last year; under the new, 12-team playoff format, they would have made the postseason. In a soft National League Central, they were a piece or two away from contention. But instead of buying, they sold—hard. “We must align our payroll to our resources,” GM Nick Krall said at the time. They lost All-Star right fielder Nick Castellanos to free agency, traded Gold Glove catcher Tucker Barnhart for a prospect and waived reliable No. 3 starter Wade Miley rather than pay him $10 million. One day into spring training, they traded righty Sonny Gray for prospects; a day later they traded All-Star left fielder Jesse Winker and third baseman Eugenio Suárez for prospects.

“This has all happened really fast,” says manager David Bell. “When we came out of spring training, guys didn’t really know each other, in a lot of ways. Our team changed a lot. Some of the main guys in our clubhouse who had been here a long time—it was a really close team. And a lot of those faces were gone. So it’s like, O.K., everyone’s trying to find their place on the team.”

And just as they started to jell, half of them got hurt. According to Baseball Prospectus, the Reds lead the league with 396 games missed to the injured list so far, and they blow everyone else away with value lost, with more than two full wins. Six-time All-Star first baseman Joey Votto has been out since May 3 with COVID-19. India, last season’s Rookie of the Year, has already missed 24 days with the hamstring strain. Center fielder Nick Senzel has been on the COVID-19 list since May 4. Three-time All-Star third baseman Mike Moustakas missed 10 days with a strained right biceps.

A run like that would devastate any team. But a team with depth would be better equipped to handle it. The Reds got rid of all their depth because they didn’t want to pay for it.

“I know where we are,” says Krall. “I get it. I see it. But it’s been great to see guys grind through it—just the positive attitude guys come into the clubhouse with every day, whether it’s coaches, staff, players, it’s everybody, and I really respect that from that group.”

What he does not say is that he has not been put in a position to succeed, either. In 2018, his predecessor, Dick Williams, shed righty Homer Bailey’s $23 million salary by trading two prospects to the Dodgers for outfielders Matt Kemp and Yasiel Puig, lefty Alex Wood and Farmer. Those four players combined for 0.7 WAR, and only Farmer remains with the Reds. Los Angeles turned those two prospects into right fielder Mookie Betts and ace Max Scherzer.

This season, Krall’s ownership group has signed more apologies (two) for antagonizing fans than it has multiyear deals in free agency (zero).

On a radio show before the Reds’ home opener on April 12, team president and COO Phil Castellini—son of CEO Bob Castellini—was asked why fans should continue to trust them.

“Well, where are you going to go? Let’s start there,” Phil said. “Sell the team to who? You want to have this debate? If you want to look at what would you do with this team to be more profitable, make more money, compete more in the current economic system that this game exists, it would be to pick it up and move it somewhere else. So, be careful what you ask for.”

A few hours later, a Cincinnati TV station WLWT asked him to clarify his remarks. “Are you gonna abandon being a Reds fan?” he said. “Are you gonna abandon following this team? We haven’t abandoned it; we haven’t abandoned investing in the team and the community. The point is, how about everybody just settle down and celebrate and cheer for the team? You can hate on us all you want; we’re not going anywhere.”

He later apologized to the fans and to his employees. But the few people with nowhere else to go started showing up with bags over their heads, holding SELL THE TEAM signs. (Through a club spokesperson, both Castellinis declined to be interviewed for this story.)

The Reds have not won a playoff series since 1995, and there’s not much reason for hope. This is not a full teardown, the kind designed to accumulate prospects and stockpile draft picks. This is just the bill coming due for years of bad management. According to Spotrac, their $116 million payroll this year ranks 21st in the league. Their fourth-highest-paid player this year is outfielder Shogo Akiyama, whom they released in April but still owe $8 million. And the cavalry is not coming. In March, MLB.com ranked the Reds’ farm system No. 15 in the sport, and 20 of their top 30 prospects are at High A or below.

Most of the players who are here have never really won anything. For those who have, the focus on development at the major league level can be jarring. Left fielder Tommy Pham spent 11 years fighting his way through the crowded outfields in the Cardinals’ system before breaking out in 2017 and has also played for the Rays and Padres. He signed a one-year, $7.5 million deal this offseason as a free agent, hoping to improve his stock with a season in a ballpark he loves.

However, he has never played for a loser before, and he is still getting used to what that means. He lauds the coaches’ tireless work with young players and says he hopes his teammates are taking advantage of the opportunities they are being afforded. But he is not sure they should be afforded those opportunities.

“There shouldn’t be development in the majors,” Pham says. “There shouldn’t be. When I came up, there was a long list of boxes you had to check off before you got here. I remember I saw a guy get sent down because he missed the damn cutoff. I was in the minors and [then St. Louis manager] Tony La Russa sent him down and I was like, Damn, I gotta make sure I hit my cutoff [man].”

Pham also carries a different mindset than some of his teammates. While those around him celebrated Wednesday’s win, Pham stewed.

“There just has to be a little bit more urgency,” he says. “Because you still play the game to win. I play the game to win. A game like this, I’m looking like, All right, you know, this is an easy W, but it turned into a close game. We ended up using an extra pitcher. Stuff like that might be vital for tomorrow, you know? I came up differently. I still have that thought process.”

That tension often pervades bad teams. How do you balance learning how to play with learning how to win? The Reds’ approach is to break everything down into the smallest pieces possible. Don’t worry about winning the division, or even winning the game. Win the at bat. Win the pitch.

And they insist that despite their record, they believe they can win the World Series. “Look at the Braves last year,” says Farmer. “They were awful in the first half.”

Sure. But the Braves added players. So far, the Reds have only subtracted.

These are smart guys. They know the score. They have made more than a few references to Major League, the movie in which Cleveland, despite the best efforts of its owner to sabotage the team, win the division. A small replica of Jobu, the voodoo figurine owned by the fictional right fielder Pedro Cerrano, sits on a table in the center of the home clubhouse.

Shortly after Votto hit the IL, he FaceTimed a few teammates and invoked the movie. The team had recently snapped an 11-game losing streak, then immediately started a nine-game losing streak. Votto wanted to pump up his friends.

They dissolved into laughter, which annoyed him. “No!” Votto insisted. “I’m serious!”

Buoyed by his speech, they took the field that night, prepared to shock the world. They lost.

More MLB Coverage:
• Hitter, Pitcher, Prankster: Shohei Ohtani Is a Triple Threat
• Five-Tool Newsletter: Gleyber Torres Is Better Than Ever
• MLB Hitters Are Not Living Up to Expectations
• The Pitching Coach Behind the Diamondbacks’ Revival
• Angels’ Season Gains a Sense of Magic With Detmers’s No-Hitter