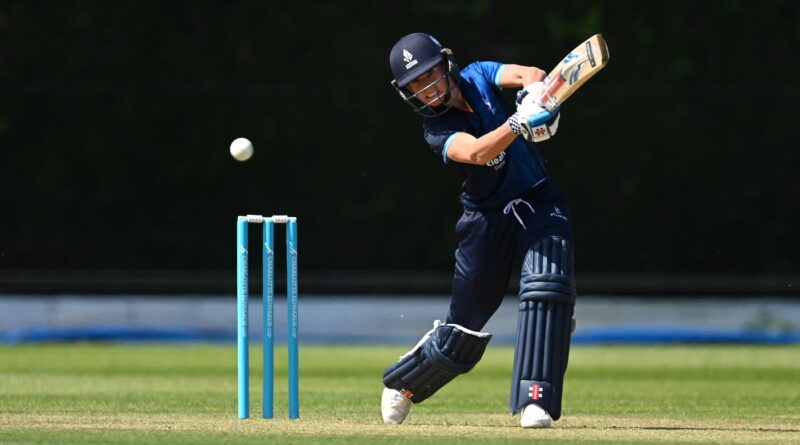 A fantastic knock of 96 from England’s Lauren Winfield-Hill saw Northern Diamonds shine in a 39-run victory over Loughborough Lightning in the opening round of the Charlotte Edwards Cup.

Winfield’s superb innings, which came off just 51 balls and was her highest score in T20, powered the visitors to a formidable total of 177 for five which proved too much for the hosts at a sun-drenched Haslegrave.

Winning the toss and opting to bat, Diamonds took full advantage of the conditions with an opening assault on the Lightning bowlers that they struggled to recover from for the remainder of the innings.

Each of the opening five overs went for double figures as Diamonds cruised past 50 with some powerful hitting from Winfield-Hill and Abi Glen.

Glen fell to a catch from Teresa Graves off Kirstie Gordon for 25 but it barely mattered as Holly Armitage joined Winfield-Hill at the crease and the pair put on 99 for the second wicket with the Diamonds skipper offering valuable support to the free-scoring opener.

Lightning had their chances and a drop on the boundary from Lucy Higham proved particularly costly as Winfield-Hill took full advantage by smashing three consecutive sixes off the unfortunate Kathryn Bryce in the very next over.

The England star looked to be easing her way to a century but fell four shot when she skied a delivery from Bryce to Bethan Ellis who took a fine running catch over her shoulder.

From 145 for two when Winfield-Hill departed in the 16th over the Diamonds innings faded somewhat with Leigh Kasperek (7), Phoebe Turner (0) and Beth Langston (1) departing in quick succession as only Armitage stood firm to finish unbeaten on 40 as Diamonds closed on 177 for five.

Lightning’s reply got off to an excellent start with Marie Kelly and Tammy Beaumont full of running and deft stroke play if not the power hitting of Winfield-Hill.

The opening pair had reached 79 in the 11th over when Kelly advanced down the wicket and was bowled by Beth Langston for 46.

The run-chase became even tougher when Kathryn Bryce was bowled by Emma Marlow for four with Beaumont continuing to do her best with the odd boundary and some excellent scampering between the wickets.

Beaumont brought up her half-century with a boundary off Kasperek in the 16th over and while she remained at the crease Lightning had a glimmer of a chance with the experienced England international looking in great form.

But it was not to be as Lightning’s chances were extinguished when Beaumont was bowled by Marlow for 59 in the next over leaving the run rate increasingly insurmountable as the hosts’ innings closing on 138 for seven with Smith picking up a couple of wickets in the final over.