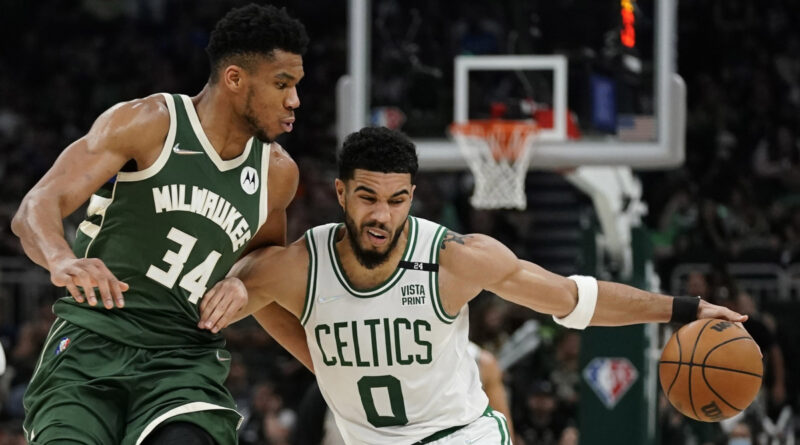 In one of the most physical series the NBA has seen in years, with likely the best player in the world on one side and a budding superstar on the other, and a pair of title contenders throwing haymaker after haymaker, the beautiful, bullying playoff matchup between the Celtics and the Bucks could only end one way: Game 7.

Jayson Tatum willed Boston to that point with a season-saving 46-point, nine-rebound, four assist showing to lift the Celtics to a 108–95 victory over Milwaukee in Game 6. The Bucks got their own incredible performance from Giannis Antetokounmpo, who had 44 points, 20 rebounds and six assists in the losing effort.

With the sixth game of this fantastic series in the books, we outlined six key takeaways from Boston’s win.

We all understand that everyone on Milwaukee’s roster, from Antetokounmpo on down, is being asked to contribute more offensively with Khris Middleton, the Bucks All-Star and second fiddle, sidelined this round.

Holiday has easily been the player to see the biggest increase in shot attempts without his running mate, taking 20 shots in Game 1, 20 in Game 2, 30 tries in Game 3, 22 attempts in Game 4 and 24 in Game 5. He took a series-low 17 field-goal attempts in Game 6. But it wasn’t so much how many attempts he took; it was how rushed some of those looks were.

Sometimes, he flung up a contested look that seemed to have no rhythm to it. In one case, with Boston leading 75–64, Holiday was speeding the ball down the floor on a 3-on-2 transition look with teammates on either wing. Instead of looking to either of them, or just taking the ball all the way to the hole, Holiday pulled up from above the break and launched a triple that misfired.

He finished with a merely decent line on that end: 17 points on the 17 tries to go with four assists and a turnover. But in fairness, there might have been a reason he was rushing.

Among the more jarring stats Friday night: Bucks wing Grayson Allen was 0-for-5 and a minus-24 at halftime, meaning Milwaukee had been outscored by a whopping 24 points in the 14 minutes he’d been on the court to that point. (Somewhat surprisingly, Allen—just 4-for-20 in the series from deep—came out and started the second half despite his awful showing.)

Beyond Allen’s dud, backup guard George Hill also got considerable time, logging 19 minutes without scoring. He went 0-for-3 from the field.

On a night in which Giannis posted the NBA’s first 40-point 20-rebound playoff performance since Shaq in 2001, the Bucks still lost by double-figures at home, largely because few of his teammates joined the party. And given that, and the general trajectory we’ve seen in the series, it wouldn’t be shocking if we see Budenholzer try to further extend the minutes of wing Pat Connaughton—who shot 6-for-8 from the field and finished with 14 points in 33 minutes—during Game 7.

Another potential player who could be in line to receive more time in the deciding game is Jevon Carter, the backup point guard and assist-to-turnover savant, who’s logged a fantastic net rating off the bench in the playoffs and is capable of replacing Hill.

Boston settled for jumpers in the middle of the third quarter

Earlier in the series, after Game 1, Celtics coach Ime Udoka said he told his players they needed to be judicious about when and where to pull the trigger from deep, because they’d likely be able to get those looks frequently against a Milwaukee defense that prioritizes taking away the painted area.

Despite that message, Boston launched at will during one stretch of the game, not only missing many of the jumpers, but also watching the Bucks simultaneously make a run.

Leading 68–52, the Celtics’ attack seemed to settle, becoming far less aggressive for a nearly four-minute stretch, from the 7:02 mark of the third quarter to the 3:06 mark.

Boston’s offensive possessions went like this over that span:

For as much of a struggle as Milwaukee’s offense was, the club found daylight in the middle of the third as it grabbed long rebound after long rebound, utilizing those misses to fuel transition opportunities, where Antetokounmpo becomes even more unstoppable than normal.

While Boston began the four-minute span with a 16-point advantage, the Bucks cut the deficit to eight, 70–62, getting a pair of buckets from Giannis along with jumpers from Connaughton and Bobby Portis, who each scored within eight seconds of Milwaukee grabbing the defensive rebound.

It obviously wasn’t enough to earn the victory, but quick-strike baskets are manna from heaven for an offense without many options outside of Antetokounmpo and Holiday.

Something to watch in Game 7, based on the success it yielded during that run in Game 6: Milwaukee’s small-ball lineups with Antetokounmpo at center generally seem to give the Bucks a boost. It leaves them more versatile on defense and considerably faster on offense, with fewer players the Celtics can comfortably help off of.

Derrick White was huge for Boston

The Celtics were just as top heavy as the Bucks in Game 6, getting 89 of their 108 points from either Tatum, Brown or Marcus Smart. But don’t overlook Derrick White’s contributions in the contest.

White, a remarkably smart player, made use of well-timed cuts into the paint like this one, which freed up open shots for other players, like this triple for Brown.

He made one of those plays that absolutely deflates a home crowd to begin the fourth quarter when he picked Giannis’s pocket immediately after the two-time MVP grabbed a defensive rebound. The steal led to a Brown layup, allowing the Celtics to push their lead to 84–70.

And perhaps most important, White logged a quick seven points after checking in for the final four minutes of the opening half. He drew a shooting foul with five seconds to go before halftime, hitting a pair of free throws to put Boston up by 10, 53–43.

The burst was incredibly meaningful, and gave the Celtics some cushion. When White entered the game just four minutes earlier, Boston had been up by just three.

Jayson Tatum has proven himself as a superstar

For everything White did, though, you have to credit Tatum most for the Boston victory. On a night where Giannis illustrated how and why he’s the best player in the world, Tatum looked almost as good, and didn’t back down.

With the Bucks closing in, getting the deficit down to six with just under 10 minutes to play, Tatum went to work, scoring 11 straight points.

He started the scoring spree by going to the basket and drawing a foul that put him at the line. But the next 10 points looked like a damn clinic. A nearly impossible midrange fadeaway with Holiday—a stud defender—draped all over him as the shot clock buzzer went off. Another shot-clock buzzer-beating triple from the left wing directly in the face of Hill, who, despite only standing 6-foot-4, owns a 6-foot-9 wingspan. He then lofted a fadeaway about 15 feet into the air, where no one could block it, before the shot came down and touched nothing but the net, leaving Holiday looking hopeless in the post. Tatum finished the incredible scoring outburst by punishing the Bucks for helping off him with another triple from the left wing, as Connaughton arrived a hair late.

The shot pushed Boston’s lead back to eight, 95–87, allowing the Celtics to breathe, even though Milwaukee smelled blood up until Tatum took over the scoring in that stretch. The effort was just enough for Tatum’s teammates to take the baton and finish things out. Brown and Smart hit jumpers shortly after, giving the Celtics a double-figure lead, and Milwaukee never got the deficit back to single digits after that point.