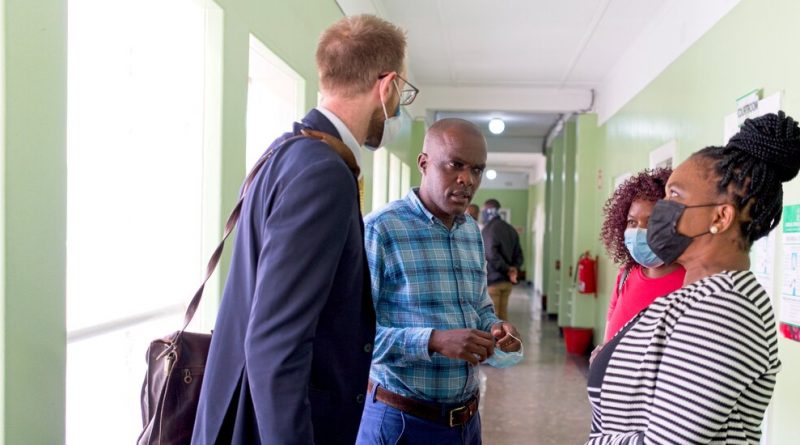 A freelance reporter working for The New York Times in Zimbabwe is scheduled to be tried on Wednesday on accusations that he helped two other journalists for the news organization illegally enter the country last year, a charge that even the government acknowledged at one point to be practically baseless.

The case against the reporter, Jeffrey Moyo, 37, has attracted both domestic and international attention, as evidence of increased harassment and intimidation of the media in Zimbabwe, the landlocked southern African country of 14 million.

He was initially arrested on May 26, then jailed in the southwestern city of Bulawayo for three weeks before he was granted bail. Prosecutors have accused him of violating the Immigration Act, which carries a sentence of up to 10 years in prison, a fine, or both.

The Times, press-freedom advocacy groups and Mr. Moyo’s lawyers have said Mr. Moyo has been wrongly accused and that he should not face trial. At the bail appeal hearing in June that secured his release from Bulawayo’s overcrowded prison, the government conceded that its case was on “shaky ground,” court papers show.

“We do consider the charges to be baseless and not only that, but the state has effectively said as much as well,” said Doug Coltart, one of Mr. Moyo’s lawyers. “This is a clear-cut case and we believe that we can show that Jeff is innocent of any wrongdoing and we hope that he will be acquitted.”

The authorities in Zimbabwe have not commented on the prosecution.

Officials have said Mr. Moyo procured what they described as phony accreditation documents for Christina Goldbaum and João Silva, Times journalists who flew from South Africa to Bulawayo on May 5 for a reporting trip. Both Ms. Goldbaum and Mr. Silva were ordered expelled four days later.

Zimbabwe prosecutors also have accused an official of the Zimbabwe Media Commission, Thabang Manhika, with having provided the documents to Mr. Moyo, who gave them to Ms. Goldbaum and Mr. Silva upon their arrival.

Mr. Moyo and Mr. Manhika were set to be tried together. But on Tuesday, the judge, Mark Nzira, granted the request of Mr. Moyo’s lawyers to separate the cases, and ordered his trial to proceed on Wednesday. Mr. Manhika’s lawyer said that he had not had sufficient time to prepare, and the judge set that case to begin on Jan. 24.

The prosecutors have provided no evidence so far to back their contention that the accreditation documents were fake, Mr. Coltart said. Moreover, the lawyer said, Mr. Moyo has provided the police with receipts that show he obtained the documents legally and that Mr. Moyo believed he had been “dealing with a bona fide ZMC official who is authorized to accredit journalists.”

Threats against Zimbabwean journalists have increased in recent years under the country’s ruling party, the Zimbabwe African National Union — Patriotic Front. Freedom House, a nonprofit group based in Washington that computes an annual index measuring political and civic rights around the world, downgraded Zimbabwe in its 2021 ranking from “partly free” to “not free” because of “intensifying persecution of opposition figures and civic activists.”

Perhaps the most high-profile attack on the press has been directed at an award-winning investigative journalist and activist, Hopewell Chin’ono, who was prosecuted in 2020 on charges he had supported banned demonstrations on social media. A court in Harare, the capital, dropped the case in December, which Mr. Chin’ono described as an admission it had been trumped up from the start.

Some Zimbabwean journalists have privately expressed fears that the prosecution of Mr. Moyo was unnerving partly because of his reputation as a highly professional freelancer who has no political agenda. If it can happen to him, they argue, it can happen to anyone.

Dean Baquet, the executive editor of The New York Times, said in a statement: “We are deeply troubled by the prosecution of Jeffrey Moyo, which appears designed to chill press freedom in Zimbabwe. Jeffrey is a widely respected journalist with many years of reporting experience in Zimbabwe.”

The Committee to Protect Journalists, an advocacy group based in New York, has been outspoken in its criticism of Zimbabwe over Mr. Moyo’s prosecution, particularly since the government acknowledged the weaknesses in the case six months ago. If prosecutors do not drop the case, said Angela Quintal, the group’s Africa program coordinator, that “would simply reinforce perceptions that prosecutors are acting in bad faith and are using Moyo as an example to censor and intimidate the press in Zimbabwe.”

Mr. Moyo, who has a wife and young son, has described the prosecution as an ordeal, requiring numerous trips between Bulawayo and Harare, his home base, 270 miles away.

“I hope this case just ends,” he said. “I long for my freedom. I want to work peacefully.”