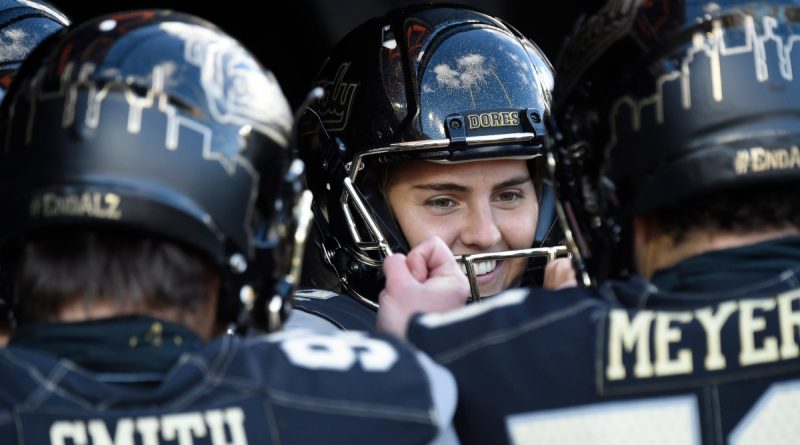 When Sarah Fuller took the field a year ago for Vanderbilt’s football team, the college senior took the world by storm, empowering women of all ages to do what many thought was impossible—break barriers and make history.

Much like that phrase that she placed on the back of her helmet during her playing days for the Commodores, Fuller has since become an icon in women’s sports as the girl who stepped up when a team needed someone.

“I started playing soccer when I was five,” Fuller says. “I started out as a midfielder, but my coach said, ‘well you’re tall’, and then I played goalkeeper. I thought it was a punishment.”

The path to becoming “Fuller the Placekicker” took a long time. Fuller quit soccer for a year when she was 12 because she wasn’t enjoying being a keeper. After a year off, Fuller came back, met her goalkeeper coach, and was ready to try again.

“I think the position fits my personality,” Fuller says with a laugh. “I can be loud and run into people, it’s perfect.”

When Fuller was a sophomore in high school, she started to seriously consider extending her career to college. To focus more on soccer, Fuller stopped playing volleyball and joined an ECNL team in Dallas called the D’Feeters Kicks, and eventually got called up to a national team camp.

“It was goalkeepers only,” Fuller recalls. “There is a picture from it at the bottom of my Instagram, and it’s me, Casey Murphy is there, Laurel [Ivory], who is at Virginia—all of these people who are all still present and still awesome at soccer today.”

Fuller was getting looks from a couple Division II schools, and eventually Vandy came along after seeing film of her playing. It was a school she had never heard of, but Fuller’s parents encouraged her to take a look.

“My parents told me to look it up because it is a great school in the SEC,” Fuller says. “It is right in Nashville, and so we took a trip out there, and it was everything I could have asked for.”

It was that summer when Fuller gave her verbal commitment to Vanderbilt.

Kicking has always been a skill the 6’2” goalkeeper possesses. Fuller could launch the ball 60 yards as a high schooler back in Wylie, Texas. By the time she was a freshman at Vanderbilt, Fuller was ready to play, and more excited than ever.

Instead of lacing up her cleats as a freshman, however, Fuller was wearing a cast—a broken foot would sideline her and she saw no playing time.

By the time she was a sophomore, Fuller was fully healed and helped to record a shutout in the one game she played for the Commodores that year. But injury struck again and Fuller ended up with an injured disk in her back.

Fuller, it would seem, was prone to injury. Her junior year, the keeper ended up with a hairline fracture in her other foot. When she was finally about to play on the field, she recorded her first start and first solo shutout against Chattanooga.

Then the COVID-19 Pandemic hit and sent everyone home.

“I had been through hell and back,” Fuller says. “There were several times that I thought about quitting. I thought about transferring. I just didn’t know if this was the level I needed to play at if I was just getting hurt all the time. I had lots of days where I would just call my parents crying.”

With the uncertainty of a season during the pandemic, Fuller still reported to preseason in July 2020. It became clear that this was the time Fuller had been so patiently waiting for: She saw playing time in 12 games with 8-3-0 record. Fuller had a string of shutout after shutout for over a month, and the Commodores would enter the SEC tournament as the seventh seed.

The Commodores rolled through the competition. Fuller recorded an assist on a goal in the quarterfinals against Tennessee, when she effortlessly rocketed the ball down to the other end of the field. Fuller and her teammates played Arkansas in the finals, beating them 3–1 and bringing home Vandy’s first women’s soccer SEC title since 1994.

“I am really glad I stuck with it,” Fuller says. “I was able to go out there and do what I always believed I was capable of. I am that much more proud of winning the championship during the pandemic because it was so difficult at times, just mentally really tough to do, but we got through it.”

The celebrations for Fuller only lasted a few days when she was asked to try out for the football team, which desperately needed a kicker. Vanderbilt does not have a men’s soccer team, leaving Fuller as one of the only choices to fill the spot.

Her parents were driving back to their home in Texas from Alabama, where the SEC championship was held, when Fuller called to tell them the news that she was going to try out for football.

Later that same day, Fuller called her father and he told her, “You know this is a big deal, right?”

And her father was right. The goalkeeper-turned-placekicker didn’t turn around the winless Vanderbilt football team. But she did have a great effect on those tuning in to watch history be made.

On the back of Fuller’s helmet was a plate that said Play Like a Girl—a nod to the nonprofit organization of the same name that empowers girls through sports and helps to propel them into male-dominated fields, such as STEM.

“That was just some idea that came to me,” Fuller recalls. “I kind of pushed for it on the back of my helmet because some guys had stuff on the back of their helmets that they were supporting and I was like, ‘I want to do that.’”

Fuller said that the timing could not have been more perfect, as she felt that she had a bunch of little moments that were getting her on the right path. After becoming a media sensation, Fuller reflected on her time in the spotlight, something she did not completely grasp when she lined up for that extra point.

“I treat it as a responsibility,” Fuller says. “I know so many people are watching, and I want to do the right thing. Continuing to support women in any way possible is my big thing. I still get people who tell me I am a huge inspiration or that I gave them the courage to try football.”

Fuller knows as well as anyone the future is full of endless possibilities—she mentioned taking a shot at playing professional soccer and finding the path that leads her down the right road.

For now, a year later, after having time to process the impact she has made for women and girls in sports, the former placekicker is a graduate student at the University of North Texas. Fuller is back to playing keeper, the thing she loves the most.

“My coach has made it very clear that I would not be doing anything football related while I am here.”

Mackenzie Meaney is a contributor for GoodSport, a media company dedicated to raising the visibility of women and girls in sports.