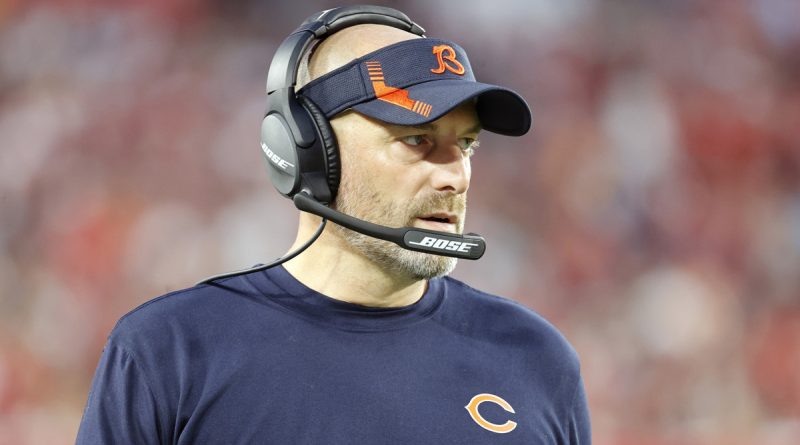 One of my high school graduating class’s dubious claims to fame was that we were so obnoxious and disorderly during an assembly that we forced a world-class motivational speaker, a man whose job it was to galvanize and motivate large groups of people, to walk off in the middle of an assembly.

It falls under the not-so-breaking-news category that high school kids can be idiots. They often lack perspective to understand the large-scale ramifications of their words and actions. It’s a strange time in life, one that causes pangs of regret decades later, once we’ve learned the lessons we were supposed to learn and ripened emotionally.

That assembly came to mind this week after video surfaced of a stand full of kids chanting about the firing of Matt Nagy at his sons’ high school football game. The kids were likely riding high on a sense of faux defiance. They thought it was funny. Nagy is a public figure, sure. A man who makes millions of dollars to absorb jeers from tens of thousands of people. But this came off as cruel and malicious. It broke down the barrier between professional and personal life that we all hope we can maintain, no matter how far in our respective professions we climb.

Kids can be idiots, but only in the way we allow them to be. It showed—in a tidy, compact way—the casualness with which we as a sports society handle coach and player hirings and firings. Combined with kids’ penchant for careless behavior, it creates an environment where we treat someone’s job status as our own personal comedic piñata, and not as the truly terrifying and emotionally taxing moment it is.

My intention is not to tee off on a group of young adults. Rather, it’s a reminder as we head into coach firing season—which one plugged-in operator suggested could be particularly unforgiving—we could all be better about framing the conversation around job loss in a sport that we love. Coach, player, administrator, whatever.

If you’re failing to conjure any sympathy for Nagy, consider the support staff at the lowest levels of the organization making something of a nice middle-class life for themselves. There are likely people below Nagy with young families trying to figure out schooling and housing, child care and proximity to other loved ones. How did that viral video feel to their husbands, wives and children?

As someone who has prematurely called for a coach’s firing in print, I’m not excusing myself from this thought experiment. There’s a fine line we all have to walk. There are times it was warranted, there were times, in hindsight, it wasn’t. Those pangs of regret still come and go. At our core, the public salaries at the top of the business and the fame associated with being part of a professional sports league serve to embolden us like some kind of unofficial shareholder in our favorite team. We weigh in. We often demand more out of the coaches and players we watch than we do of ourselves, and if the product isn’t meeting our satisfaction, we hope that the person we entrust with our entertainment ceases to be able to make a living. How wild does that sound? In some cases, we feel comfortable enough reminding them of the strange power we wield when they’re away from the football field, or checking their social media.

Should Nagy lose his job, he’ll be back in some capacity. At the highest rungs of coaching society, a former head coach is almost never truly exiled from the community. There are coordinator jobs, consulting jobs, college jobs, broadcasting jobs and the coaching staff at the University of Alabama. That doesn’t change the fact that he had to be reminded of the worst part of his professional life while trying to enjoy a thin sliver of peace watching his kids. It doesn’t change the fact that there will be some members of the Bears staff, some players who were scheme specific, some coaches, some quality controllers who will lose a shot at their dream entirely.

So, in the coming weeks, even if you’re still happy to see a coach go, we can still approach the situation with some humanity—if not for the organizational figurehead, for the other people just trying to get by and piece the next phase of their lives together.

There’s a good chance I might have learned that sooner myself. But back in high school, in that assembly, which probably would have covered thoughtfulness and compassion, I was talking to my friends loud enough to be heard across a subway platform.

• What Every NFL Team Should Be Thankful For
• GamePlan: Jonathan Taylor and the Value of a Great RB
• Business of Football: Packers Stock and More