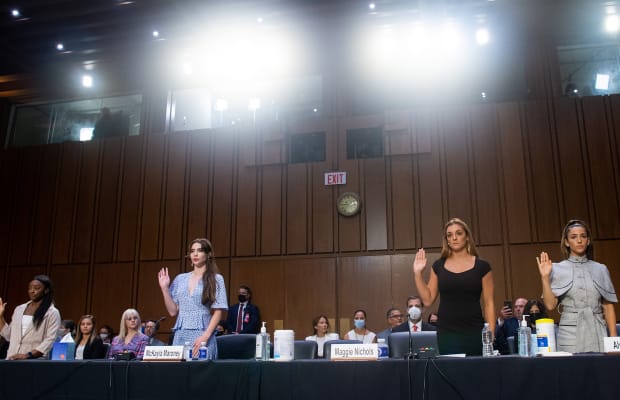 Olympic champions Simone Biles, McKayla Maroney and Aly Raisman and World champion Maggie Nichols called on Wednesday for Congress to dissolve the U.S. Olympic and Paralympic Committee’s board of directors in a letter to Sen. Richard Blumenthal (D-Connecticut) and Sen. Jerry Moran (R-Kansas).

The four gymnasts requested a joint resolution be passed by Nov. 1 under the Empowering Olympians and Paralympians and Amateur Athlete Act of 2020, which the two senators co-authored. The legislation placed more liability on the committee and national governing bodies for sexual abuses by coaches, officials and employees. Additionally, it allows Congress to decertify the bodies or dissolve the board.

“We believe it is time for Congress to exercise its authority over the organization it created by replacing the entire USOPC board with leadership willing and able to do what should have been done long ago: Responsibly investigate the systemic problem of sexual abuse within Olympic organizations — including the USOPC — and all efforts to conceal it,” the group wrote.

“To be clear, I blame Larry Nassar and I also blame an entire system that enabled and perpetrated his abuse,” Simone Biles said in her testimony. “The scars of this horrific abuse continue. The impact of this man’s abuse will never be over.

“We have been failed and we deserve answers. It really feels like the FBI turned a blind eye to us.”

Per a July report, the Department of Justice concluded that the FBI showed “extremely poor judgement” in the handling of 2015 allegations, adding that FBI agents in Indianapolis made “materially false statements” during interviews with federal officials. The false statements were reportedly made in an effort to “minimize errors made by the Indianapolis Field Office.”

The gymnasts wrote in the letter, “Since being aware of Nassar’s abuse, the USOPC’s top priority has been to hide culpability and avoid accountability.”