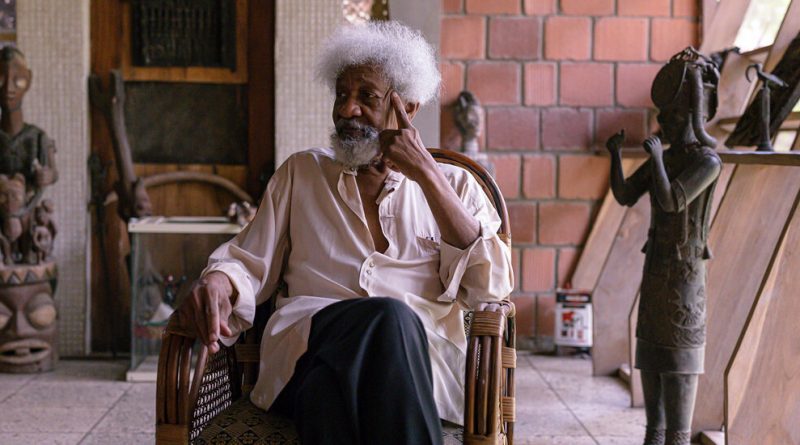 Sometimes the firebrand temperament distracts from the writing. To his longtime editor, Erroll McDonald, however, they coexist. “They feed off each other,” he said. “It is impossible to think of one without the other.” And Soyinka the activist does seem to keep providing Soyinka the writer with material.

Not least for his latest work, “Chronicles From the Land of the Happiest People on Earth,” his first novel in nearly 50 years, which Pantheon will publish in the United States on Tuesday. Its careering plot twists, spirited cast of characters and sinister themes — a corporation that sells human body parts, a false prophet who uses elements from different religions to suit his purposes — might seem unlikely, but they are less so for someone in an intimate relationship with Nigeria.

Born in Ibadan, Soyinka was brought up by loving Christian parents and a grandfather who, Soyinka said, confirmed that he was a child of Ogun, the Yoruba deity of poetry, blacksmiths and palm wine. Ogun is Soyinka’s muse.

He studied in Britain, the country that colonized Nigeria, and when he returned on New Year’s Day 1960, it was in the process of becoming independent. He threw himself into exploring and growing his newly free home.

But it wasn’t long before its new politicians let him down, and he got wind of electoral fraud in western Nigeria. Forcing the radio announcer to read a message denouncing fraud at gunpoint was his first dramatic attempt to hold the country’s politicians to account, but it was only the beginning of a lifelong struggle.

“He’s almost untouchable, because he’s paid his price, and he’s also recognized internationally,” Austen-Peters said. “He’s got a lot of things going for him.”

Several times, Soyinka has had to sneak out of Nigeria and into exile, his life in danger because he spoke out against the politicians of the day. (Once, he sneaked into Nigeria from neighboring Benin.)