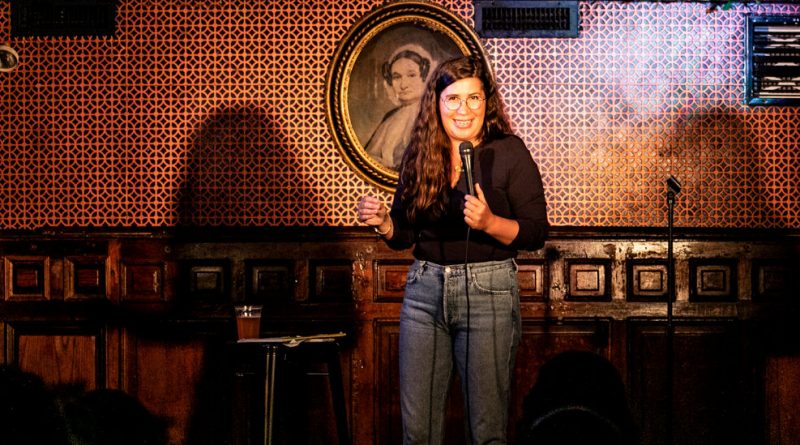 Her offhandedness is part of her charm, but it has a purpose. Leiby wants to give us a portrait of abortion not as a crisis or a moral question, but as a common and confusing medical procedure. The broader context of this show, as she reminds the audience, is a culture of silence surrounding women. From sex education to birth control, she explains how much is unspoken, rushed through or hidden from view. Leiby even shocked herself when she called Planned Parenthood, she says, and in asking about an abortion, whispered the word. She mocks the vague ads for birth control and imagines an honest one in which a 37-year-old woman wakes up in a cold sweat screaming next to a mediocre white man, which leads to a scene of him eating Cheetos in a hospital room as she gives birth.

Leiby doesn’t move much onstage, and her gestures are limited. Her comedy leans on her nimble writing, which displays a range and density of spiky jokes — puns, metaphors, misdirection. She knows how to set a scene and is alert to the details of nightmares. She is terrified of scary movies and has a ticklishly amusing podcast, “Ruined,” in which a friend, Halle Kiefer, explains the plots of horror films to her. It’s like listening to a play-by-play announcer and color commentator of a game on the radio, except instead of balls or strikes, it’s about beheadings and exorcisms.

What comes across on the podcast and in this show is a sensitivity to anxiety and fear mitigated by curiosity. Leiby understands that whether to have a child is a subject fraught with confusion for many, and she acknowledges it, but that’s not her issue. She presents herself as a wry if bumbling protagonist of her own story, describing her attitude toward the prospect of children like this: “I acted like my eggs were Fabergé: feminine but decorative.”

In 2004, The New York Times published an article about culture and abortion titled “Television’s Most Persistent Taboo.” That has changed. In a short set on “The Comedy Lineup,” on Netflix, the comic Kate Willett has a sharp joke about how men looking to hook up should care about abortion rights. “I don’t even know if the men that I know understand that sex can make a kid,” she said. “They are super worried that sex can make someone your girlfriend.”

In the past year, streaming services have put out two comedies, “Plan B” (directed by Natalie Morales) and “Unpregnant” (directed by Rachel Lee Goldenberg), about girls who go on the road with a friend to get reproductive help. These knockabout buddy films aren’t explicitly about the recent state-level pushes for anti-abortion legislation, but they certainly haunt the action, with closed clinics and ideologues providing key plot points.