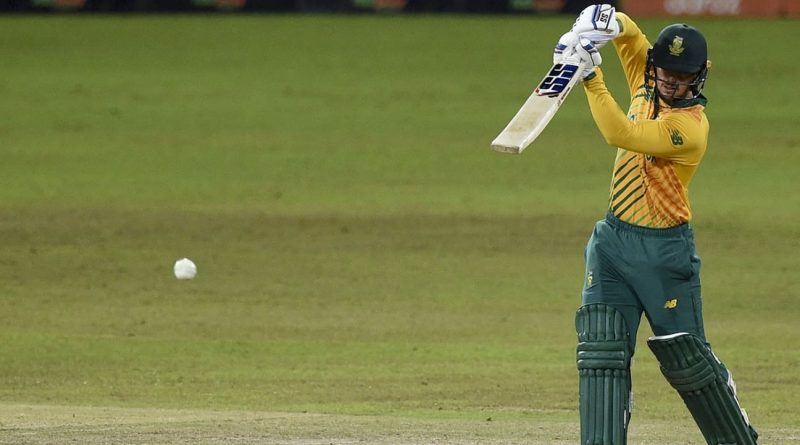 Quinton de Kock, the South Africa wicketkeeper-batter, has jumped to a career-high eighth position in the ICC’s men’s T20I rankings for batters, following a productive series against Sri Lanka.

de Kock, with 153 runs, topped the run-charts in the three-match series which South Africa won 3-0. He capped it off with an unbeaten 46-ball 59 in the third T20I, helping him vault into the top 10 in the rankings for the first time. de Kock has previously held career-high rankings of third and sixth in ODIs and Tests, respectively.

Aiden Markram, who made scores of 48 and 21* in his two innings in the series, was the other South African batter to climb the rankings, moving 12 spots to 11th. Among the bowlers, Bjorn Fortuin (up 103 places to 43rd), and Anrich Nortje (up 29 places to 71st) made the most notable gains. Sri Lanka’s Kusal Perera, meanwhile, leaped 10 positions to take the 38th position in the batting charts, after he made 69 runs from two innings.
Bangladesh, who beat New Zealand 3-2 in the recently concluded T20I series, saw a number of their players also rise in the rankings. Mustafizur Rahman, who finished with eight wickets, moved two places to eighth. Nasum Ahmed jumped 25 places to 15th, while Mehedi Hasan occupied the 20th spot. However, Shakib Al Hasan conceded top spot in the allrounder rankings to Afghanistan’s Mohammad Nabi.
For New Zealand, Tom Latham and Finn Allen both shot up in the batting list, after they made scores of 50* and 41 respectively in the final T20I. Latham advanced 22 places to 44th, while Allen moved 23 places to 66th.