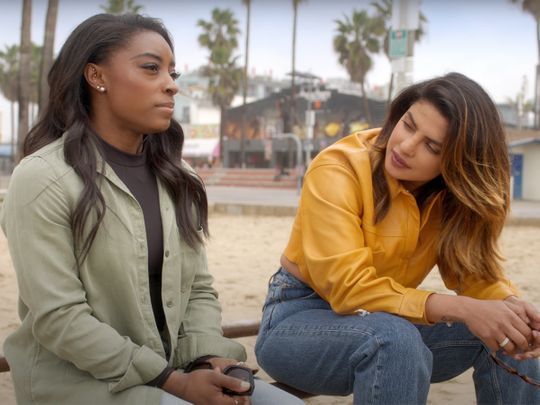 Bollywood actress Priyanka Chopra has praised Simone Biles following the US gymnast’s decision to drop out of the Tokyo Olympics due to her mental health struggles.

Chopra posted a video from when she hung out with and interviewed the athlete for her YouTube Originals Special, ‘If I Could Tell You Just One Thing’.

In the interview, which was released in March 2019, Chopra talked to the gymnast about dealing with the expectation of being perfect.

“I feel like that’s the hardest part of my career. I don’t want to say job because I chose to do it, but I feel like always meeting people’s needs, every single day, all the time is probably the hardest thing that I go through,” Biles says in the clip.

Alongside the video, Chopra wrote a touching note for Biles and called her the ‘GOAT’ (greatest of all time).

“I had the joy of getting to know @simonebiles a few years ago, and she blew me away then with her vulnerability and self awareness,” Chopra wrote in the caption. “Simone, yesterday we were reminded why you are truly the GOAT, and why nothing supersedes taking care of ourselves…body AND mind. I cannot fathom the impossible pressure you all perform under, but knowing where you need to draw the line and step away – TO CHOOSE YOURSELF – is most important.”

“Only when we are okay can we perform at our best, and enjoy doing so. Thank you for helping normalise that even under tremendous pressure, it’s ok to be human. Thank you for your courage and strength. You are a role model, and just like the rest of the world I’m so inspired and awed by you. Once again you have shown us what it truly means to be a champion,” Chopra added.

Biles, 24, is widely considered the greatest gymnast in history. She won four gold medals at the 2016 Rio Olympics. However, at the Tokyo Olympics she cited the pressure of living up to expectations and a need to protect her mental health for her decision to pull out of the team competition and subsequently from the individual all-around competition.