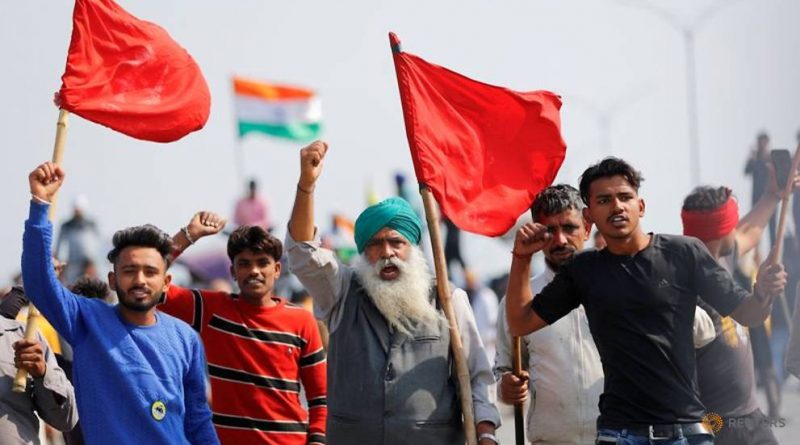 NEW DELHI: Indian farmers, protesting over three new farm laws they say threaten their livelihoods, will start a sit-in near parliament in the centre of the capital New Delhi in a renewed push to pressure the government to repeal the laws.

In the longest-running growers’ protest against Prime Minister Narendra Modi’s government, tens of thousands of farmers have camped out on major highways leading to New Delhi for more than seven months.

As India’s monsoon session of parliament began this week, some protesting farmers tried to march towards the main government district, but they were stopped by police just miles from parliament.

On Thursday (Jul 22), 200 protesters will gather at Jantar Mantar, a large Mughal-era observatory in central New Delhi that doubles up as a protest site for causes of all manner.

“Throughout the monsoon session of parliament, 200 farmers will go to Jantar Mantar every day to hold farmers’ parliament to remind the government of our long-pending demand,” said Balbir Singh Rajewal, a leading farmers’ leader.

The monsoon session of parliament will end in early August.

After extended negotiations, Delhi police have agreed to let 200 farmers gather during the day at Jantar Mantar, but protesters need to follow coronavirus guidelines issued by the Delhi Disaster Management Authority, a government statement said.

In late January, thousands of angry farmers clashed with police after driving their tractors into security barriers. One protester was killed, and more than 80 police officers were injured across the city.

Farmers say the laws favour large private retailers who, prior to the new laws, were not permitted to procure farm goods outside government-regulated wholesale grain markets.

The government says the laws, introduced in September 2020, will unshackle farmers from having to sell their produce only at regulated wholesale markets.

It argues farmers will gain if large traders, retailers and food processors can buy directly from producers.