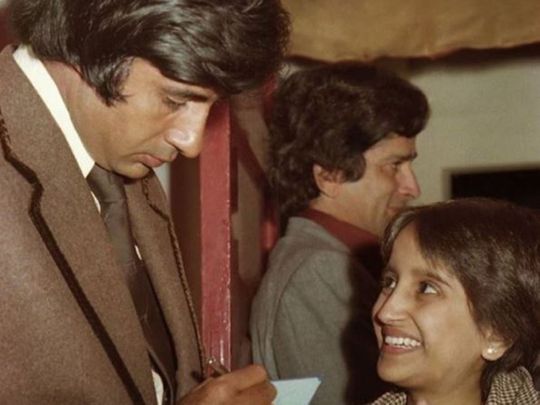 Actor Amitabh Bachchan is reliving the moments when fans would express their love and appreciation after meeting him in person.

Bachchan, 78, shared a throwback picture from the premiere of his hit 1979 movie ‘Kala Patthar’ that was held at Wembley, London.

Alongside the picture, Bachchan wrote, “… gone are the days when fans expressed their love and appreciation like the one this little one did .. so full of gratitude .. just look at her expression .. now its just an emoji.. !!!!! .. if you are lucky ..”

One can also spot the late legendary actor Shashi Kapoor in the candid picture. Kapoor headlined ‘Kala Patthar’ along with Bachchan.

Fans chimed into the comments section and expressed how they will react if they would ever get to meet the legend.

“I ever meet you I will start crying. It’s my dream to see you,” one fan wrote.

“Lucky times… She was so lucky to come so close to you sir!” another wrote.

Meanwhile, on the work front, Bachchan will next star in Rumi Jaffrey’s ‘Chehre’ co-starring Emraan Hashmi. Bachchan will also feature in Ayan Mukerji’s ‘Brahmastra’ alongside Ranbir Kapoor and Alia Bhatt.

Bachchan recently announced that he will be a part of Deepika Padukone-starrer ‘The Intern’. The superstar has replaced late actor Rishi Kapoor who was earlier supposed to play the role. The film is a remake of the 2015 Hollywood hit movie of the same name, which starred Robert De Niro and Anne Hathaway.

Bachchan also has films like ‘Jhund’, ‘Goodbye’, ‘May Day’, and several others in the pipeline.