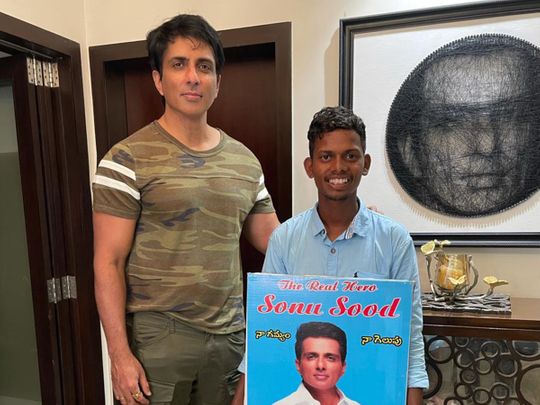 Bollywood actor Sonu Sood has been in the news for his various philanthropic initiatives amid the pandemic in India and has made many doting fans because of this.

Sood got to meet one of those fans, a young boy who went to great lengths to meet the star.

“Venkatesh, this boy walked barefoot all the way from Hyderabad to Mumbai to meet me, despite me making efforts to arrange some sort of transportation for him to come here. He is truly inspiring and has immensely humbled me,” the actor wrote on Instagram along with a picture of himself with the determined young man.

Sood was appreciative of his efforts but also discouraged others from trying similar things.

“Ps. I, however, don’t want to encourage anyone to take the trouble of doing this, love you all,” Sood added.

Ever since the start of the COVID-19 pandemic last year, Sood has been helping people in need such as those stranded in other states and people who need medical help.

Earlier, it was revealed that Sood would set up oxygen plants in 16-18 states. The actor said the process has already started with two places being locked in Andhra Pradesh’s Nellore and Kurnool cities. The process will be in full swing by June end and will be completed by September in all the states.

Talking to IANS over phone, Sonu said: “I have tried to cover all the states. The oxygen plants will be set up near the needy hospitals which will have almost 150-200 beds. All these hospitals will never have shortage. The patients have to sometimes travel far to reach the hospitals and in some cases, they lose their lives as well. With this, I hope, such situation will never arise.”

On the work from, Sood will next be seen in the Telugu film ‘Acharya’ and Bollywood flick ‘Prithviraj’.