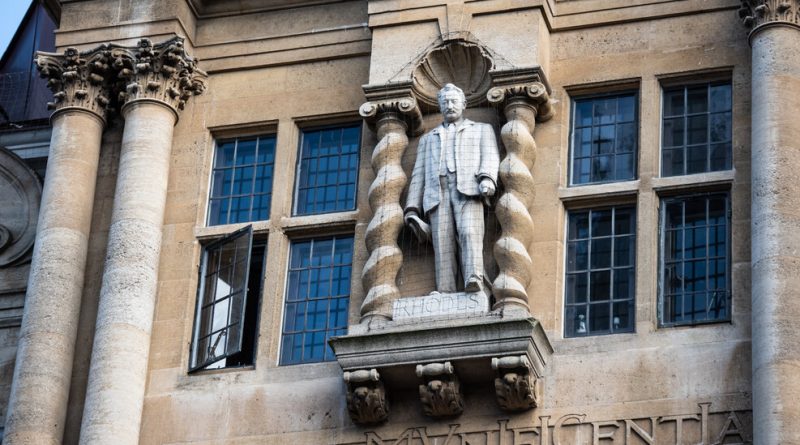 A long-running controversy at Oxford University over a statue of Cecil Rhodes, the British imperialist seen by many as an architect of apartheid in South Africa, gained new momentum this week after more than 150 academics said they would refuse to teach students of the college where the monument sits.

The scholars sent a letter to the college saying they would refuse requests from Oriel College, one of the 39 self-governing entities that make up the university, to give tutorials to its undergraduate students and to attend or speak at events the college sponsored, among other measures.

“Faced with Oriel’s stubborn attachment to a statue that glorifies colonialism and the wealth it produced for the College, we feel we have no choice,” they wrote in the letter seen by The New York Times.

The boycott is the latest high-profile protest in a complex reckoning taking place in Britain and several other European countries over their colonial and slave-trading pasts. In museums, public spaces and schools, a long-running discourse arguing that colonizing forces brought “civilization” to African countries is changing, with many critics arguing too little is being done to confront the past.

On Wednesday, some students of Magdalene College at Oxford University removed a portrait of Queen Elizabeth II, the reigning monarch, arguing that the British monarchy represented colonial history.

The British government has mostly resisted such calls, and a cabinet minister vowed earlier this year to “save Britain’s statues from the woke militants.”

“What has stood for generations should be considered thoughtfully, not removed on a whim or at the behest of a baying mob,” Robert Jenrick, the minister, said in The Telegraph.

In the wake of the Black Lives Matter protests, thousands of demonstrators gathered in Oxford last June to demand that the statue of Rhodes be taken down. Protesters across Britain also targeted monuments dedicated to Winston Churchill, and in Bristol, demonstrators toppled a statue of slave trader Edward Colson, whose profits played a large role in building the city. The statue, which was dumped into the city harbor, is now exhibited in a museum.

Cities like Bristol in England or Bordeaux and Nantes, on France’s Atlantic coast, have been forced to acknowledge that they flourished through the enslavement and forced labor of many. Belgium has sent its “deepest regrets” to the Democratic Republic of Congo for the millions of deaths and devastating damages it caused during decades of colonization, and local authorities in the city of Antwerp removed a statue of King Leopold II, who was behind the colonization.

At Oxford, Oriel College has for years dithered over the fate of the Rhodes statue, which is a prominent feature of its main building on one of Oxford’s largest streets. While Oriel College’s governing body has said it supported its removal, the college announced last month that it would not remove the statue, citing financial concerns and arguing that the operation “could run into years with no certainty of outcome.”

Instead, it pledged to raise money for scholarships aimed at students from South Africa, and to set up an annual lecture on Rhodes’ legacy, among other initiatives.

“We understand this nuanced conclusion will be disappointing to some, but we are now focused on the delivery of practical actions aimed at improving outreach and the day-to-day experience” of Black and minority ethnic students, the college provost, Neil Mendoza, told The Telegraph.

(In addition to serving as the college provost, Mr. Mendoza sits in the House of Lords, Britain’s Parliament’s upper chamber, as a conservative lawmaker.)

Simukai Chigudu, an associate professor of African studies at Oxford University and one of the academics who initiated the boycott, said Oriel College’s counteroffers were insufficient.

Join Michael Barbaro and “The Daily” team as they celebrate the students and teachers finishing a year like no other with a special live event. Catch up with students from Odessa High School, which was the subject of a Times audio documentary series. We will even get loud with a performance by the drum line of Odessa’s award-winning marching band, and a special celebrity commencement speech.

“For years, Oriel has been recalcitrant about the statue,” Dr. Chigudu said. “They’re not acting in good faith, so we won’t participate in good faith activities with them.”

Under Oxford University’s system of colleges, undergraduates attend lectures, seminars and small group sessions known as tutorials, all set up by the college they are affiliated with. While professors are also affiliated with colleges, they can tutor students from different colleges if needed.

The boycott means the 150 participating professors, who are from other colleges at the university, won’t tutor any of the 300 undergraduate students from Oriel. They also will not participate in any conferences or other events organized by the college.

A student representative for Oriel College did not respond to a request for comment.

Oriel College said in a statement Thursday that the decision of the academics not to engage in teaching activities with students from the college would have a “commensurate impact on our students and the wider academic community at Oriel, to whom we all have a duty of care.”

Rhodes’ legacy was disputed at Oxford University even before his death: in 1899, 90 academics signed a petition against Rhodes’ visit to Oriel College to receive an honorary degree.

“I grew up in Oxford as a child, and I can remember that there were already some issues around the statue in the 1980s,” said Danny Dorling, a professor of geography at the university and a signatory of the letter, who said the statue’s presence was a stain on the university’s reputation.

In 2015, students signed a petition and staged a protest against the monument, following the lead of students at the University of Cape Town in South Africa, who had successfully demanded that a similar statue of Rhodes be removed.

The “Rhodes Must Fall” movement at Oxford University has since organized several protests against the statue, with renewed strength over the past year.

Born in Britain, Rhodes studied at Oriel College in the late 19th century before becoming the prime minister of the Cape Colony, in South Africa, in 1890. Through his diamond company, De Beers, Rhodes annexed large swathes of land, and the settlers and soldiers he led killed thousands of civilians. Biographers and critics of Rhodes have highlighted his racist views, saying that his discriminatory policies against native residents paved the away for apartheid.

Rhodes died in 1902, and in his will donated today’s equivalent of nearly 12 million pounds — about $17 million — to Oriel College.

Dozens of foreign students also study at Oxford University every year through the Rhodes Scholarship, which was established through Mr. Rhodes’ will. Previous recipients include Bill Clinton and a former Australian prime minister, Tony Abbott.

Following the protests in Oxford last year, Oriel College’s governing body tasked an independent commission to study options for the statue. It supported removal of the statue, as well as of a plaque commemorating Rhodes on another street in Oxford.

In a 144-page report, the commission reminded the college of Rhodes’ past: his policies in the Cape “intensified racial segregation,” and his actions were “responsible for extreme violence against African people,” according to one professor cited.

“Does the College wish to retain so central a symbol of racial segregation at a time when society, and institutions such as the University of Oxford, are working hard to deal decisively with this legacy?” William Beinart, an emeritus professor of African studies at Oxford University, wrote in the report.

Prof. Dorling, who signed this week’s letter, said the boycott was aimed at displaying frustration over Oriel College’s inaction.

“You can’t keep the statue of a racist on the highest plinth of a college building,” Prof. Dorling said, adding that its removal was a question of time.

“The question is how much — months, years, decades.”