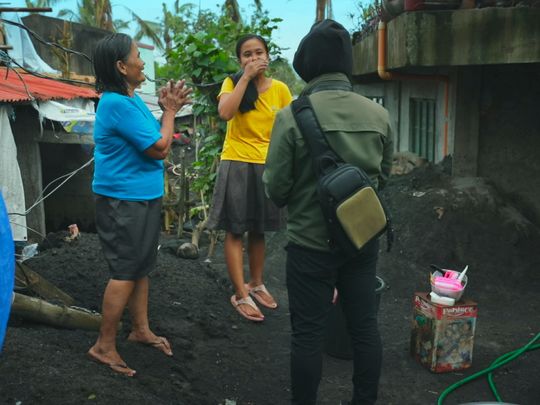 Dubai: The vibes of Ramadan encourage everyone to do good and give something back to the community. Since we are in the midst of a global crisis owing to the COVID-19 pandemic, people have been searching for some positivity in their lives — all the more.

Like every other year, the endless list of Ramadan series and shows on television this time around includes an Emirati TV programme called ‘Qalby Etmaan’ or ‘My heart rests assured’, that’s encouraging viewers to do good. The heartwarming show revolves around a young Emirati man called Gaith, who travels the world and tries to help people in need and solve their problems in various ways.

What makes the show different from other shows is that Gaith is a mysterious man, meaning that the viewers don’t know anything about him yet. They not even have an idea about what he looks like as the camera only shows his back. Gaith has no photos of him anywhere, not even on social media, and no one knows his full name.

Since the show started in 2018, and Gaith became known for his black shirt and brown backpack, travelling around the region to aid people, the audience has just one question: Who is Gaith Al Emirati?

‘Good is a principle. Good is human’

People were frantically searching the internet for an answer, especially since most people working in charitable fields are known and their faces are visible. However, Gaith said in a statement that there shouldn’t be a face for doing good. “Good is a principle. Good is human. Appearance or a face may ruin the idea [of doing good],” Gaith explained.

In the current season, Gaith has travelled to different countries across the globe to reduce poverty by either supporting typhoon victims, or facilitating access to education for all — particularly those from families with limited income or who are orphans. “The good that comes from the UAE is spread all over the world. UAE doesn’t care to question a human being about his or her religion, race or country. People are there for each other. Just follow your heart to help people,” added Gaith.

Throughout the show, Gaith tries to figure out the meaning of his inner self and seeks tranquility by travelling around the world, to meet new people and listen to their stories about poverty, need and distress.

In the introduction to the first episode, Gaith told his audience: “Usually, the first episode explains what the new season holds, our initiatives, places we visited, and what we’ll do. But this year, we will leave you to find out everything for yourself. To be honest, this season was difficult and extremely exhausting, but holds lots and lots of goodness.”

During the episodes of the current season, Gaith offers people ‘Happiness Cards’, sealed with a word of happiness. Each person chooses a card and opens it to find a surprise gift in it to help him or her in difficult times.

Hope of getting educated

Episode 6 this year deals with bridges that expose people, especially children, to great dangers, especially the danger of falling into the river. The bridges have led to great losses for families as they are important sources for obtaining services, goods and conducting daily business.

Therefore, a number of new bridges have been constructed that are meant to be stronger and more stable for longer periods of time, in the face of natural disasters such as winds, hurricanes and severe rain. These are challenges that many ordinary people are often exposed to, particularly the poor, which make their lives even more difficult. And that’s just one way in which Gaith has stood by the needy.

Gaith has also supported many people by implementing other initiatives, such as supporting various educational centres, giving orphan students and those who are unable to pay school fees an opportunity to complete their studies and later on providing them with job opportunities.

“There is no need for us to mention the importance of education as everyone knows it. It is a basic necessity that should be made available to all because if illiteracy is a problem, then being silent about it is a crime,” said Gaith.