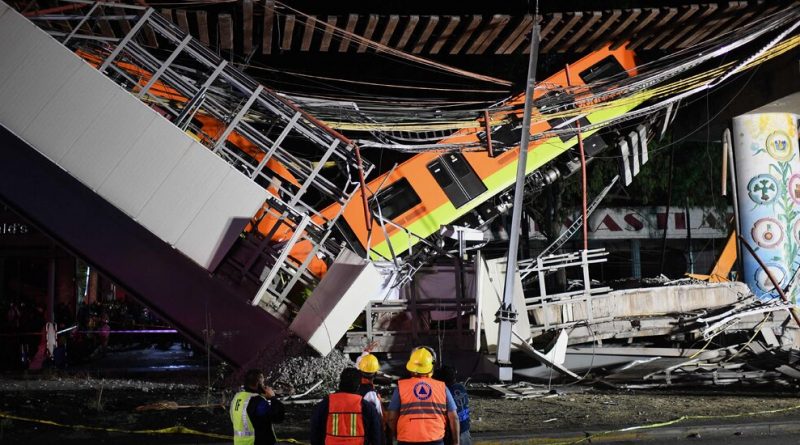 The subway system in Mexico City, the country’s sprawling capital, handles more than four million passengers a day and is the second-largest in the Americas, after New York City’s. And when it was inaugurated in 1969, decorated with Aztec artifacts and Maya-style friezes, it was the pride of a nation.

But in recent years it has become a symbol of urban decay.

There was concern over the integrity of the elevated tracks and support columns on the stretch of tracks where Monday’s accident occurred after a powerful earthquake hit Mexico in September 2017.

The elevated infrastructure on the subway line — known as Line 12, or the Golden Line — was damaged, El Universal newspaper reported.

Later that month, some local residents told El Universal that they feared that the damaged infrastructure might collapse. The newspaper reported at the time that a column between the Olivos and Nopalera stations had suffered structural damage. It also reported that engineers were to conduct an ultrasound survey of the reinforcing steel in 300 columns along Line 12’s elevated portion.

It was not immediately clear what work had been done to address the safety concerns. But there has been a broad decline of the system in recent years.

The Golden Line, where Monday’s accident occurred, was opened in 2012 and is the newest in the system. Yet from the outset, it has been beset by problems.

Trains running over elevated parts of the track had to slow down for fear they may derail. And just 17 months after the $2 billion line was inaugurated, the city suspended service on a large part of it.

Service was later restored, but concerns about the system as a whole have grown.

Last month, one of the capital’s 12 subway lines shut down after a track fire. And in January, a fire ripped through the metro’s downtown headquarters, killing a police officer and sending 30 others to hospital with smoke inhalation. Six subway lines were temporarily knocked offline.

Opposition parties blamed a lack of maintenance for the inferno, and the conservative National Action Party filed a criminal complaint against Mayor Claudia Sheinbaum and the head of the Mexico City subway.

In March 2020, one person was killed and at least 41 others were injured when two subway trains collided in Mexico City. Ms. Sheinbaum said at the time that one of the trains had apparently backed into the other. Video of the wreckage showed that the force of the collision had left one of the trains stuck on top of the other, according to Reuters.

The next month at the Misterios station, a railway coupler — a mechanism used for joining train cars — fractured en route to its destination. Although that incident resulted in no deaths, workers asked for more safety measures, El Universal reported.

Another derailment in 2018 sent shock waves through a suburb of Mexico City. A train carrying cargo ran off the tracks, and one of its cars crashed into a house, killing five people.

The most recent serious accident occurred in 2015, when a collision between two trains left 12 people dead. In 1975, another train collision at the Viaducto station killed 31 people and left more than 70 injured, according to El Universal.