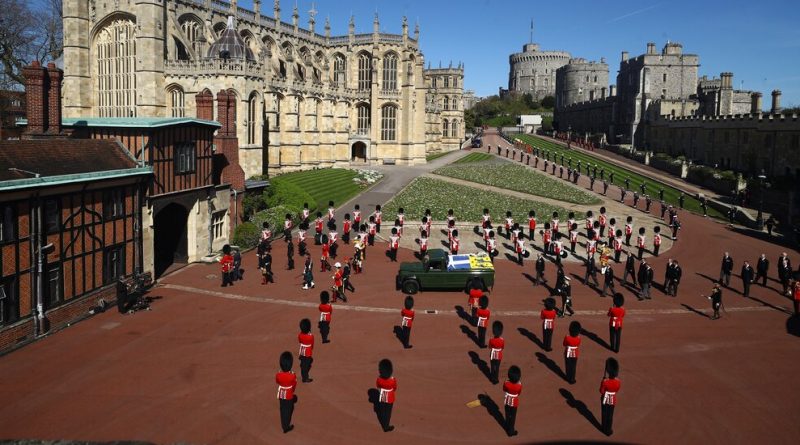 LONDON — His coffin borne on a military green Land Rover that he had helped design, Prince Philip was laid to rest on Saturday at Windsor Castle in an austere, meticulously choreographed funeral that captured his steely role in Britain’s royal family and offered a solemn glimpse of its uncertain future.

Queen Elizabeth II bade farewell to Philip, her husband, who died on April 9, two months shy of his 100th birthday, from solitude inside St. George’s Chapel. She was clad in a mask and kept at a distance from her children and grandchildren by pandemic social distancing requirements, which limited attendance to 30 people.

Her grandsons Prince William and Prince Harry were separated as well, by one of their cousins, as they walked behind Philip’s coffin. This quirk of royal protocol dramatized the rift between the brothers that opened after Harry’s marriage to an American former actress, Meghan Markle.

That wedding was held nearly three years ago in the same Gothic chapel on a similarly crystalline Saturday. It was both a joyful contrast and a poignant reminder of the turbulence that has enveloped the House of Windsor since its patriarch faded into retirement and a new generation of royals seized the limelight.

There were glimmerings of a thaw between Harry and William as the brothers walked together after the funeral and spoke quietly to each other. But this was a somber occasion, a family convening in sadness to mark the death of a man whom many credited with providing stability and meting out discipline to younger royals as they struggled to navigate the pressures of duty and celebrity.

If the wedding of Harry and Meghan was an ebullient display of a new-age royal family, complete with a gospel choir and an African-American preacher, Philip’s funeral was a throwback to the monarchy’s traditions. There was no eulogy, despite some reports that Prince Charles would pay tribute to his father.

The archbishop of Canterbury, the Most Rev. Justin Welby, and the dean of Windsor, the Right Rev. David Conner, recited the readings, rather than family members. A choir of four, its numbers cut by the pandemic and standing apart on a stone floor, sang hymns selected by Philip, their voices echoing in the chapel’s empty nave.

Less than an hour later, Philip’s coffin was lowered into the royal vault as the dean intoned, “Go forth upon thy journey from this world, O Christian soul,” and the pipe major of the Royal Regiment of Scotland played. The brisk schedule was in keeping with the no-fuss manner of Philip, a man known as much for his remote demeanor and penchant for gaffes as for his enduring fealty to the queen.

Still, the ceremony was rich in symbols of the military career that Philip, whose formal title was Duke of Edinburgh, gave up when his young wife unexpectedly ascended the throne in 1953 after the death of her father, George VI.

The duke’s coffin was draped in his personal standard and carried his sword and naval cap. On nine cushions on the altar were military regalia, including Philip’s Royal Air Force wings and field marshal’s baton, as well as the Order of the Elephant, bestowed on him by Denmark, and the Order of the Redeemer, by Greece. Those symbolized his royal lineage as a prince of Denmark and Greece.

After Philip was interred, the Royal Marines’ buglers played “The Last Post” and “Action Stations,” a summons to battle stations that is rarely played at funerals but can be requested by a veteran of the Royal Navy. During World War II, the duke saw combat aboard a British destroyer and battleship.

Nothing captured the day’s military feeling like the custom-made Land Rover Defender that conveyed Philip on his last journey to the chapel. The duke tinkered with the vehicle’s design for 18 years, settling on an open back and metal pins to secure his coffin. He requested the military-green paint job.

At 3 p.m., after the Land Rover had passed beneath Windsor’s crenelated towers and arrived at the chapel — to the metronomic boom of cannon shots and the peal of bells — there was a national minute of silence.

The BBC and other broadcasters offered respectful coverage of the ceremony but avoided the blanket programming that drew more than 100,000 complaints last week when the BBC pre-empted popular shows to dissect every aspect of Philip’s life. Some likened the wall-to-wall approach to North Korea’s.

Yet for a country that reveres its queen, the funeral of her husband was a genuine national moment — on a par, some said, with the funeral of Queen Elizabeth, the queen mother, in 2002, which drew more than a million people to watch her cortege pass from Westminster Abbey to Windsor Castle.

“There’s an enormous, almost subconscious, feeling about the monarchy in Britain that is not appreciated by the metropolitan media,” said Vernon Bogdanor, a research professor in British politics and government at King’s College London. “It’s inarticulate, but it comes out at these crucial moments.”

Philip’s funeral, however, did not draw the crowds of other royal ceremonies. Because of the pandemic, Buckingham Palace urged people not to come to Windsor, the town west of London that the castle overlooks. On a quiet Saturday, it seemed as though most people had heeded that advice.

The restrictions meant that Philip’s converted Land Rover made a trip of only a few hundred yards, rather than the 22 miles from Buckingham Palace to Windsor. Rather than crowds lining the route, troops from the Royal Navy, Marines, the Highlanders and the knights of Windsor stood at attention as he passed.

Queen Elizabeth, who turns 95 next week, followed the procession in her gleaming aubergine Bentley, not at the head of it, which would have been customary for a sovereign. Charles, her heir, headed the procession, joined by his sister, Princess Anne.

Those limits also meant a circumscribed guest list inside the chapel. Among those not in attendance: Prime Minister Boris Johnson, who gave up his seat, according to Downing Street, so that the royal family could invite an extra guest, and Meghan, who is pregnant and did not attend on advice of her doctor.

The queen did invite three German relatives of Philip, a reminder of his non-British roots and a sign of history’s march. In 1947, in the shadow of World War II, the duke’s German family was kept away from the couple’s wedding.

The queen had other delicate protocol decisions to make. She decreed that the none of family’s male members would wear military uniforms at the ceremony — a decision that spared Harry the indignity of appearing in civilian clothes despite having served in Afghanistan. As part of the agreement with the palace under which he withdrew from royal life, Harry was stripped of his honorary military titles.

The British news media reported that Prince Andrew, the queen’s second son, had forced the issue by demanding that he wear the uniform of an admiral, a title that he was scheduled to acquire last year on his 60th birthday. He asked for the appointment to be deferred after being caught up in scandal over his friendship with the disgraced financier and sex predator, Jeffrey Epstein, which led to Andrew’s exile from royal duties.

The scandal, which erupted after an interview that Andrew gave to the BBC in 2019, set off a tumultuous period for the royal family. Two months later, Harry and Meghan announced their plans to step back from official duties and leave Britain.

They settled in Southern California, resurfacing last month for an extraordinary interview with Oprah Winfrey, in which Meghan said that a member or members of the royal family had raised qualms about the skin color of the couple’s then-unborn baby.

Royal watchers have attributed some of the family’s dysfunction to the declining role of its patriarch. Philip retired from his duties in 2017, moving to a cottage on the grounds of one of the queen’s estates, Sandringham, where he painted in oils and pursued his hobby of driving carriages.

There was a quiet nod to Philip’s hobby at the funeral: As his coffin traveled through the quadrangle at Windsor, it passed a polished dark-green carriage with his two beloved ponies, Balmoral Nevis and Notlaw Storm.