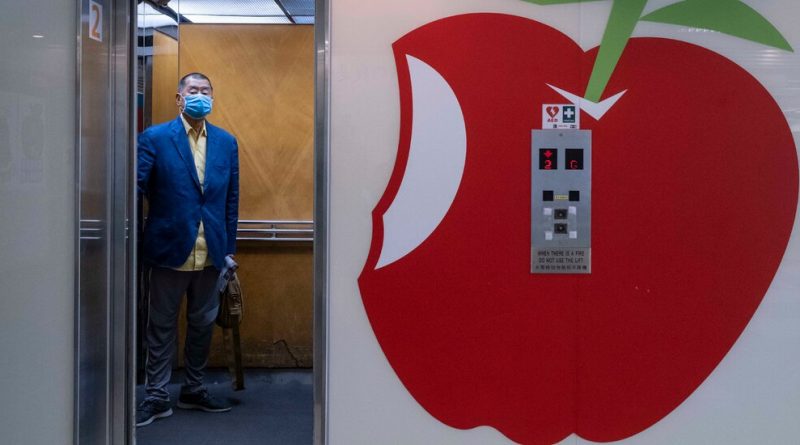 HONG KONG — Jimmy Lai, a pro-democracy media figure, and several of Hong Kong’s most prominent opposition campaigners were sentenced on Friday to prison terms of eight months to 18 months for holding an unauthorized peaceful protest.

Supporters of the defendants say the prosecutions are the latest sign of the fundamental transformation that Beijing has sought to impose on Hong Kong. Until recently, the city had long been a bastion of free speech. Now, the sentences send an unmistakable message that activism carries severe risks for even the most internationally recognized opposition figures.

The court sentenced Mr. Lai, 73, a media tycoon who founded Apple Daily, an aggressively pro-democracy newspaper, to 12 months in prison. Martin Lee, an 82-year-old lawyer, often called Hong Kong’s “father of democracy,” was handed a suspended 11-month prison term, meaning he would avoid being put behind bars if he is not convicted of another crime in the next two years.

For China’s ruling Communist Party, the penalties meted out to Mr. Lee and Mr. Lai, figures it has long considered thorns in its side, now allow it to cast them as criminals, bolstering its defiance of foreign criticism and American sanctions over its crackdown on Hong Kong. For Mr. Lai, it could be the beginning of more legal jeopardy and potentially more prison time because he is b charges under a national security law imposed by Beijing last year

Their supporters denounced the sentences. “It’s excessive, entirely out of proportion. What have they done to deserve such severe punishments?” said Fernando Cheung, a former lawmaker. “It was a peaceful demonstration for the public to display people’s discontent. All these political leaders have done was walking with the people.”

The sentences are the latest escalation in a broader repression that has effectively silenced the political opposition and crippled its prospects.

Dozens of pro-democracy politicians face charges of subversion under a tough national security law. China has overhauled Hong Kong’s electoral system to cement the pro-Beijing establishment’s grip on power. Protests have been largely barred during the pandemic, and self-censorship in the media and arts, which are under intense official pressure, is a growing concern.

Over a period of months in 2019, hundreds of thousands of people joined antigovernment demonstrations in one of the greatest challenges to the Communist Party in decades. The sentences imposed on Friday, added to the measures already taken against dissent, are likely to chill participation in such protests in the future.

“It’s very clear that the approach has changed radically, not just by courts and police,” said Sharron Fast, a media law lecturer at the University of Hong Kong. “The emphasis is on deterrence; the emphasis is on punishment. And with large-scale assemblies, the risk is very high.”

The defendants were charged over a march on Aug. 18, 2019, that followed a gathering in Victoria Park on Hong Kong Island. The rally in the park had been permitted by the police, but the authorities, citing the violence at earlier protests, had not approved plans for demonstrators to march about two miles to government headquarters afterward.

Hundreds of thousands gathered in the summer rain. And as the defendants marched out of the park after the rally, behind a banner that denounced the police’s use of force during the protests, the crowd followed. While the prosecution acknowledged that there had been no violence, aside from a single demonstrator kicking traffic cones, they cited the tense atmosphere of that period, with anger toward the police running high, and widespread traffic disruptions in supporting the charges.

Mr. Lee, who was a founder of the city’s first pro-democracy party and also helped draft the territory’s mini-constitution, has made his life’s work the advocacy of civil and political rights in Hong Kong. He has traveled the world, including many trips to Washington, to lobby for that cause. Such internationally focused activism is now banned under the national security law.

Mr. Lai, the media mogul, was smuggled into Hong Kong from mainland China as a child and worked his way up from factory laborer to clothing company tycoon. He then put his wealth into crusading, tabloid-style publications that have been sharply critical of the authorities in Beijing and Hong Kong.

Mr. Lai also faces a fraud case and charges of collusion with a foreign country under the security law for allegedly calling for sanctions against Hong Kong. In a separate hearing on Friday, prosecutors added two more national security charges, accusing Mr. Lai of conspiracy to commit subversion and obstructing justice.

In the illegal assembly case, the court rejected defense arguments that the procession after the rally was necessary to help protesters safely clear out of the crowded park, or that potential imprisonment for a nonviolent march would infringe on the rights to free speech and assembly that have traditionally been protected in Hong Kong.

Judge Amanda Woodcock said on April 1 that while Hong Kong recognizes the right to peaceful assembly, the law imposes limits to ensure safety, order and the rights of others. To refrain from prosecution just because a demonstration was peaceful “would give the law no teeth and make a mockery of it,” she wrote in her ruling.

Leung Kwok-hung, an activist, was sentenced to 18 months in prison, the heaviest punishment. Lee Cheuk-yan, a labor leader, got a 12-month sentence and Cyd Ho, an activist, eight months. Albert Ho and Margaret Ng, two prominent lawyers, were both given suspended sentences. All the defendants except for Mr. Lai had served in Hong Kong’s legislature.

Ms. Ng, speaking to the court before the sentencing, said she believed that the rule of law must be defended not only in the courts and the legislature, but also by joining the people who choose to demonstrate.

“I stand the law’s good servant but the people’s first,” she said. “For the law must serve the people, not the people the law.”

The defendants had faced up to five years in prison for organizing and participating in an unauthorized assembly.

Mr. Lai, Lee Cheuk-yan and Yeung Sum, the former chairman of the Democratic Party of Hong Kong, pleaded guilty last week to another charge of illegal assembly, related to a separate march on Aug. 31, 2019. On that day, protests did devolve into widespread violence.

Mr. Lai, in a letter this week to his colleagues at Apple Daily, told them to be careful because “freedom of speech is dangerous work now.”

“The situation in Hong Kong is becoming more and more chilling,” he wrote. “The era is falling apart before us, and it is therefore time for us to stand with our heads high.”