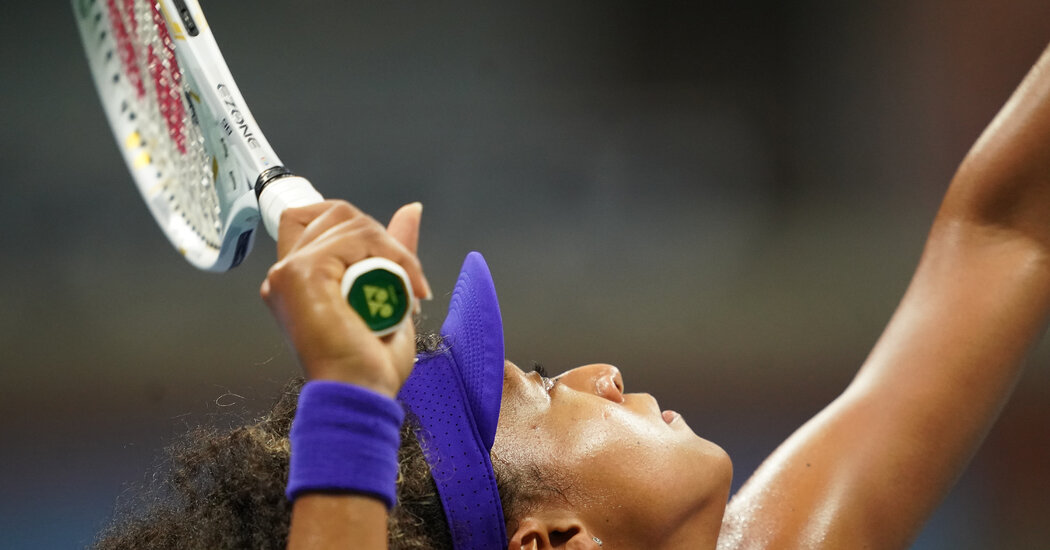 Naomi Osaka is headed back to the United States Open final.

Osaka, the No. 4 seed and the tournament’s 2018 champion, topped Jennifer Brady 7-6 (1), 3-6, 6-3 on Thursday night in a tight battle of big serves and nearly as big forehands that pitted a prodigy who is already one of the biggest stars in the sport against a late bloomer making her debut in a Grand Slam tournament semifinal.

Their resumes may be different, but their approaches to their semifinal were remarkably similar. Both players came out hitting hard, aiming for the lines and finishing points quickly. A rain pounded on the roof of an otherwise quiet Arthur Ashe Stadium with no paying spectators, Osaka and Brady did not play a game of finesse, subtlety or spins. It was power tennis from start to finish.

Osaka will face the winner of Thursday’s second semifinal between Victoria Azarenka and Serena Williams.

After splitting the first two sets, Brady was serving at 1-2, 15-30 in the third when Osaka caught a break when her backhand ticked the top of the net and dribbled over. Brady had no chance to return it, as she stood at the baseline expecting another blast. That gave Osaka her first break point of the night.

Osaka won that game when Brady sent a groundstroke long. Then, serving to go up 4-1, Osaka ran from one sideline to the other, and lasered a forehand back across the court to pass Brady, who was lunging and approaching. Brady’s eyes fell to the ground.

Four games later, Osaka closed out the match with a 116 mile per hour serve that Brady couldn’t get over the net.

Osaka, 22, is a kinetic player who hops up and down between points even as she is waiting for the ball kids to toss her a ball for her next serve. After a changeover, she jogs to the corner to drop off her towel.

Osaka has played with a medical bandage throughout the tournament around her left leg to protect a sore hamstring. She has also been outspoken throughout the summer about ending systemic racism and police violence against Black people, especially as tennis has returned from the pandemic.

Two weeks ago, after seeing the Milwaukee Bucks of the N.B.A. and teams in several professional sports leagues decide to sit out their scheduled games, Osaka announced that she would not play her semifinal match at the Western & Southern Open, a warm-up to the U.S. Open. Tournament officials then postponed all play for a day, allowing Osaka to continue. She advanced to the final but then conceded the match because of lingering soreness in her hamstring.

During the U.S. Open she has worn Black Lives Matter T-shirts and masks with the names of Black people who have been killed, some by police. She said she began the U.S. Open with seven different masks, one for each match, including the final. She was not planning on losing.

Osaka is the tournament’s 2018 champion, though her breakout win is mostly remembered for Serena Williams’s argument with an umpire after she was given a code violation for receiving coaching during the match, then a point penalty for slamming her racket to the concrete. Osaka beat Williams that night in straight sets.

Brady struggled with Osaka’s serve from the beginning as Osaka aimed for the corners of the service boxes with darts that kept Brady guessing.

When Brady could manage a return, she matched up well with Osaka, but that was easier said than done. Osaka came in wanting to make Brady prove she could cover the court, hitting balls toward the sidelines and trying to prevent Brady from digging in to unleash her powerful groundstrokes.

It was a fine plan. Firing impossible-to-return serves was a better one.

Osaka didn’t have much more luck with Brady’s serve, which has been her prime weapon since she was a teenager. Brady had five aces and no shortage of service winners in the first set, when she faced no break points.

The players were dead even for much of that first set. Brady got a first chance to break Osaka at 3-3. Facing a second serve on break point, she tried to jump on a backhand and sent it long. Two points later, Osaka was on top 4-3.

In the tiebreaker though, Osaka showed her mettle, as Brady made two costly errors, allowing Osaka to cruise to a 6-1 lead. On set point, Osaka cracked yet another booming serve that Brady could only barely touch with the rim of her racket.

The second set brought more of the same. Every time Brady or Osaka looked like she might eke out a chance for a break, the other one would come up with a big serve and an easy point.

Then with Osaka serving at 4-3, Osaka missed a crucial first serve at 30-all. Then Brady won a baseline battle on break point as Osaka sent forehand long. With a chance to serve out the set, Brady did not waste it, closing out the game as Osaka sent a forehand into the doubles alley.

Brady’s run was nothing less than stunning even though she had enjoyed some glimmers of success in recent months.

Brady won the Top Seed Open in Lexington, Ky., last month. She was 12-5 before the pandemic forced tennis and the rest of the sports world to go on hold for five months. She had beaten both the world No. 1, Ashleigh Barty, and Maria Sharapova in Australia at the beginning of the year.

Still, Brady had never been seeded before at a Grand Slam event. She was No. 28 at the U.S. Open, where she knocked off a former world No. 1, Angelique Kerber, in the fourth round.

She is a classic late bloomer and was not good enough to turn professional as a teenager even though she had trained at the Evert Tennis Academy in Boca Raton, Fla., since she was 10. Instead, she attended U.C.L.A. for two years before going out on the pro circuit. She made the round of 16 at Grand Slam tournaments twice in 2017 but had struggled at the biggest tournaments the past two years.

Even with six of the top 10 women in the world skipping the tournament, the idea that Brady could get to the semifinal would have seemed preposterous two weeks ago. But Brady has, at times, looked as good as anyone in the tournament.

With a powerful serve and a punishing forehand, she has been able to dictate the terms of her matches, forcing opponents to play defensively. She did not lose a set in her first five matches and was pushed to 6-4 just once before she met Osaka.

But Osaka is already one of the most feared players in the world for a reason. In the decisive moments — the tiebreaker and the final set — she figured out how to be just slightly better. In the third set, Osaka had 16 winners to Brady’s 12. Brady had nine unforced errors. Osaka had eight, and never gave Brady a break point.

Brady was good, very good. Osaka is in the final.