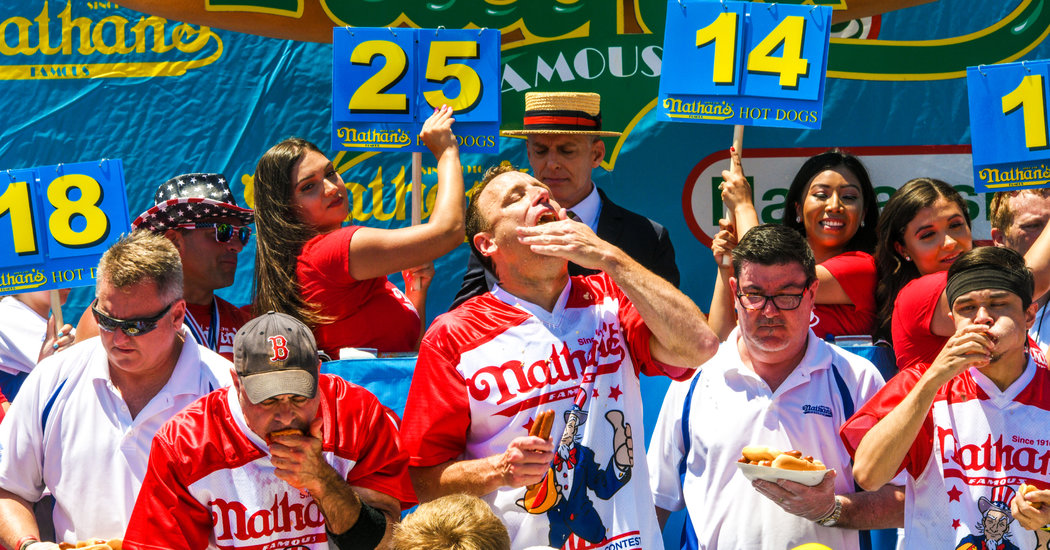 With Independence Day celebrations canceled around the country, one distinctly American tradition continued on Saturday despite the pandemic: the annual pilgrimage of competitive eaters to Coney Island for the Nathan’s Famous Hot Dog Eating Contest. But with cheering crowds turned away to promote social distancing, contestants instead chowed down amid a chorus of gulping and chewing from their competitors.

Held without fail every Fourth of July since 1942, the event ordinarily draws thousands to the original Nathan’s location in Brooklyn. Spectators sweat beneath foam hot dog hats, cheering as they watch a panel of competitors dunk the sausages into water — to soften the buns — all in the name of America.

“The Nathan’s Famous contest is synonymous with July Fourth, America and the celebration of freedom,” said the event’s host, George Shea, who is known for his extravagantly patriotic commentary. He introduced the winner of the 2019 men’s competition as “the very vessel of our freedom” and “the champion of the Fourth of July.”

But there was no crowd this year to cheer raucously, and the competitive eaters, who usually hover over their piles of hot dogs shoulder to shoulder, were spaced apart from one another. The contest was limited to five women and six men to allow for adequate social distancing. One woman was unable to attend because of restrictions on travel to New York from Arizona, where coronavirus cases are surging.

Joey Chestnut of San Jose, Calif., who won his 13th title on Saturday after eating a record 75 hot dogs in 10 minutes, said in an interview on Friday that it would be challenging not to be surrounded by the deafening cheers from the crowd this year — and for the first time to be able to hear his competitors while they chow down.

“They’re going to be burping and groaning, and I’m just going to have to focus on my hot dogs,” Mr. Chestnut said.

For Mr. Chestnut, 36, the confirmation that the contest would still go on “made it a lot easier to practice.” Eating 40 or 50 hot dogs at a time without the certainty that the competition would happen this year was a bit “depressing,” he said.

The reigning women’s champion, Miki Sudo of Torrington, Conn., defended her title this year, winning for the seventh time by scarfing down a record 48 and a half hot dogs.

“This is a competition unlike anything that we’ve had before,” she said. This year’s precautions include plexiglass and at least six feet of distance between eaters, as well as testing and temperature checks for competitors.

The location of this year’s hot dog slog, which has been held every summer since 1916 except 1941, when it was canceled as a protest to the war in Europe, was not disclosed publicly ahead of the event to discourage loyal fans from flocking to it.

“Thank you so much for supporting us from your living rooms,” Ms. Sudo said after winning the competition.

Ms. Sudo said she was ecstatic when she found out the competition would still happen this year, and had three practice events with her boyfriend, Nick Wehry, who also competed on Saturday.

She cooked up “10 minutes’ worth of hot dogs” — about 40 wieners — for each training session.

Though he’s unable to “give sweaty hugs to people afterward” this year, Mr. Chestnut said he was encouraged that people could still watch at home.

He described the typical crowd as full of “real New Yorkers” who don’t leave town for the Fourth — dedicated fans who, up until this year, sizzled under the sun to witness the feast.

“I know they’re going to be watching, and even though they’re not in person, I’m happy I’m still part of their Fourth of July,” Mr. Chestnut said.