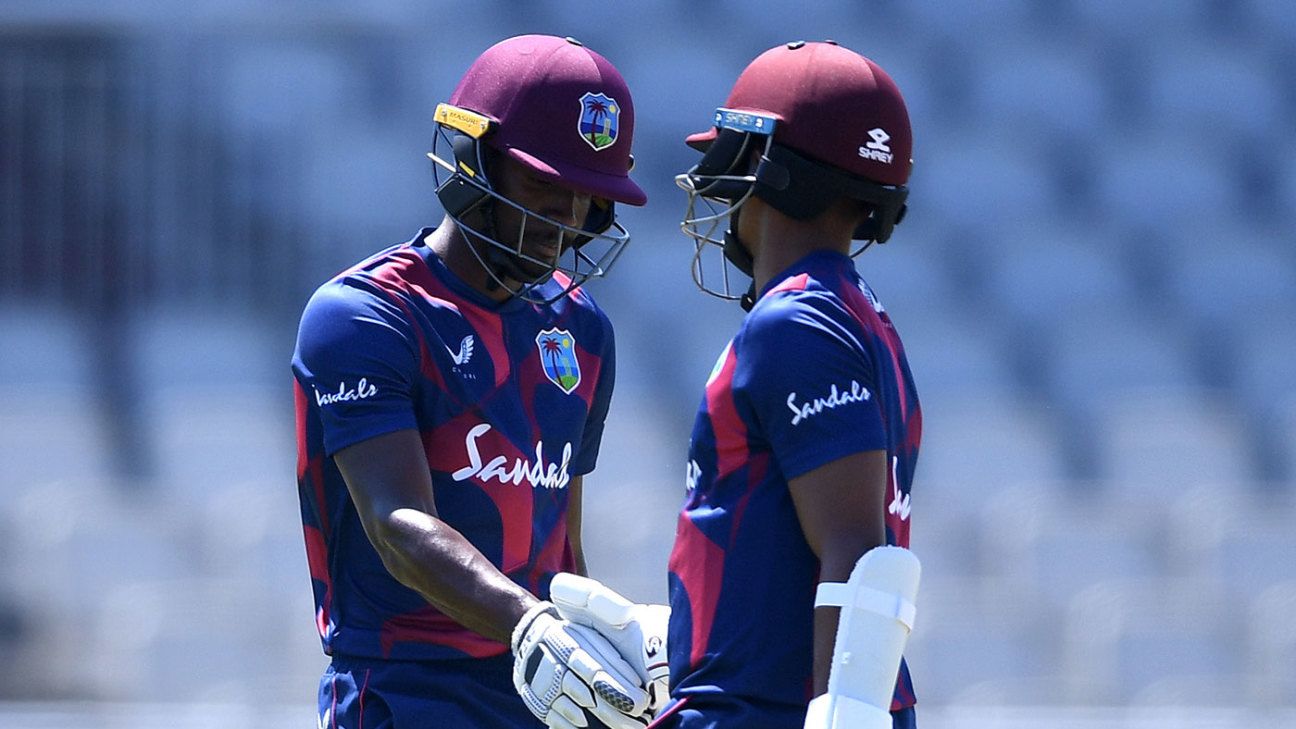 Shamarh Brooks has backed the preparations of West Indies’ batsmen as being good enough to “bring success” in the series against England, despite assistant coach Roddy Estwick admitting to concern about the form of the top order going into the Tests.

A likely top five of Kraigg Brathwaite, John Campbell, Brooks, Shai Hope and Roston Chase managed just 29 runs between them in West Indies’ second intra-squad warm-up match, a rain-affected four-day game at Emirates Old Trafford earlier this week, prompting Estwick to describe their lack of time in the middle as one of his “biggest worries”.

While Brathwaite, Hope and Brooks did manage fifties in the first tour game, they were unable to build on that, as West Indies’ first-choice pace foursome of Kemar Roach, Shannon Gabriel, Jason Holder and Alzarri Joseph combined to reduce the Brathwaite XI to 49 for 5 in their only innings. But Brooks remained confident that the building blocks were being put in place for West Indies to be competitive with the bat.

“Clearly our bowling will be our strength, and has been for the past couple of years,” he said. “If you look at our batting, when we do get it right as a unit we have won games. That’s why I’m stressing on the point that we need to bat well, especially against a team like England at home, who are going to be very challenging.

“The coach, I guess he would feel that way because of what he saw in the last game, where the bowlers really raised the intensity and we fell down. But I still don’t feel that, when we come to the Test series, it will go that way. We need to apply ourselves, stick to the basics and stick to our gameplans.

“Some of us got the opportunity to bat and spend time at the crease. It’s still a batsman or bowlers game [and] our bowlers bowled well, especially in the second game, our Test bowlers really came with a different intensity. It’s good to get out there and have a practice game but I think we are backing our preparation to bring success in this series.”

While both teams will have suffered from a lack of preparation time, due to disruption caused by the Covid-19, West Indies have the added challenge of trying to get used to unfamiliar conditions ahead of a challenging schedule of three Tests in as many weeks. There have also been concerns over the form and fitness of captain Jason Holder, while wicketkeeper Shane Dowrich sat out this week’s warm-up match after suffering a side strain.

Additionally, a CWI board dispute over the decision to allow coach Phil Simmons to leave the team’s bio-secure bubble in order to attend a funeral has provided an unwanted distraction in the build-up to the Tests. After three negative Covid-19 tests, Simmons is now back in charge of the squad, which has relocated to Southampton ahead of the first Test, starting on Wednesday.

“The guys have been working very, very hard,” Brooks said. “We know the English bowling attack is a good one, [but] once we bat well, I think we have a very good chance. Spending time at the crease will be key and as long as we apply ourselves, spend some time out there, it will get easier. We need as a batting unit to stand up in this series and make the difference.

“I think we’ve had enough time to prepare. We’ve been here three-four weeks now, we’ve had two practice games, and I think the intensity in those practice games was decent. But having said that, we just came off a first-class season as well, so it’s not like we are out of the woods in terms of not being in cricket form. I know three months [without cricket] might seem like a while, but I think the four weeks we have had here would be enough time to get ourselves back in shape and ready for this Test series.”

Brooks, one of the large Bajan contingent in the squad, also paid tribute to Everton Weekes, who died this week at the age of 95. Brooks made his maiden hundred, in only his third Test, against Afghanistan in Lucknow last year, and touched on the influence Weekes had on him as a youngster in the Barbados set-up.

“When I scored my first Test hundred in India, I spoke about Sir Everton. Even in first-class cricket, whenever cricket is being played at Kensington [Oval], he would always be in the president’s suite watching. You were always able to go up there, whether it be during the game or after the game, and have a word with him about what he would have seen, what you can do differently. Now that great man has gone but he has left a legacy and hopefully the guys in the team now can carry on that legacy.”