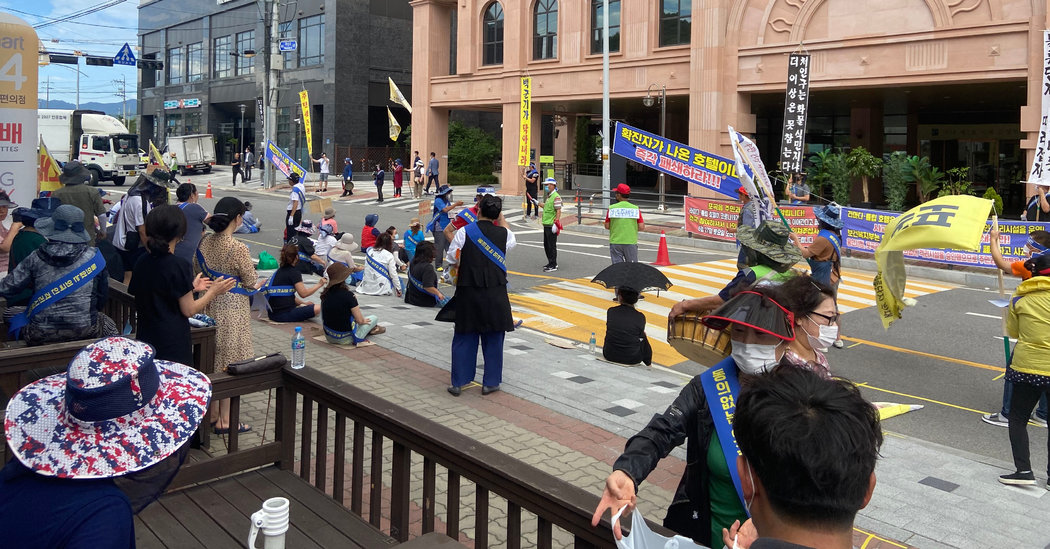 Under the government’s regulations, people quarantined in hotels cannot leave their rooms, and they can come to the door only four times a day — three times to pick up meals left by staff, and once to leave trash outside. Closed-circuit cameras monitor the Ramada’s corridors, and entrances are watched by police around the clock so that no one comes or goes without permission.

That leaves the foreigners with little hope of escaping the daily torment, even if they wanted to try.

Mr. Thompson, 59, whose quarantine began Sunday, has asked to be moved to a room at the back of the hotel, away from the protest site. But nearly every room was already taken by others in quarantine, and his request was rebuffed.

The only suggestion that government officials could offer was to keep his windows shut, he said. He has been using noise-canceling headphones and a white-noise app to cope.

“I feel sorry for residents who didn’t come equipped with them,” he said.

Oh Sung-il, an official from the Ministry of Health and Welfare who oversees the quarantine at the Ramada, said protesters’ worries that Covid-19 might spread from the hotel were groundless. The one foreigner who tested positive for the virus was quickly moved to a separate facility, and there have been no cases at the hotel since, Mr. Oh said.

But the protesters said fear of infection was enough to threaten their livelihoods.

Restaurants, motels and other businesses in Jeondae-ri depend on visitors to nearby Everland, South Korea’s largest amusement park. They had already been badly hurt by the damage the pandemic did to Everland’s attendance figures. But things have gotten even worse since the Covid-19 case at the Ramada was confirmed, residents said.

“Fewer people have stopped in our town as bad rumors about our town spread,” said Cha Ki-cheon, 59, who runs a 21-room motel in Jeondae-ri called Ever Park. “The rumor was more fearsome than the virus itself. If the government plans to run the quarantine center here until the epidemic is over, our local economy will be dead by then.”