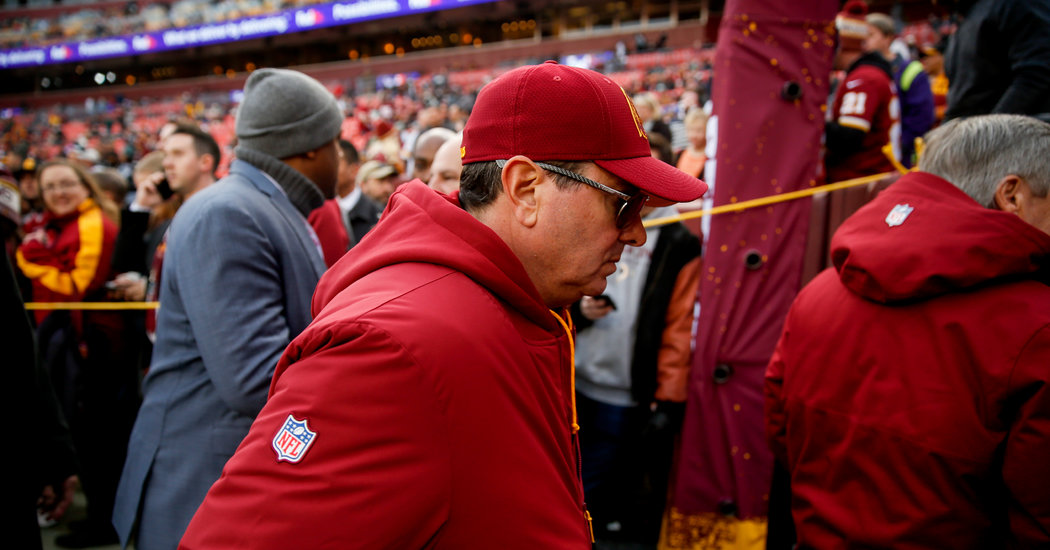 Last month, Washington said it would remove the name of George Preston Marshall from the team’s Ring of Fame and its history wall, and a statue of him was removed from outside RFK Stadium, where the team used to play in Washington. Marshall founded the team and moved them to Washington in the 1930s, and was the last N.F.L. owner to integrate his team.

When the team changed its name in 1933 from the Braves, Marshall told team members to wear face paint and the coach to wear feathers on the sideline. He also had an Indian-head logo printed across player uniforms and used a halftime band that wore tribal regalia.

Still, there was little indication that the team’s consideration of its name could follow closely behind its distancing from Marshall. As recently as Monday, Ron Rivera, the team’s new coach, said during a radio interview that talking about the team’s name was “a discussion for another time” and that he was “just somebody that’s from a different era when football wasn’t such a big part of the political scene.”

On Friday, he was quoted in Washington’s statement saying “this issue is of personal importance to me.”

What has changed in the past four days? Perhaps the cost of keeping the name.

In a short but pointed statement Thursday that did not use the team’s name, the shipping company FedEx said it had asked for the name to be changed. “We have communicated to the team in Washington our request that they change the team name,” FedEx said in a statement.

FedEx isn’t just any old sponsor of the team. For the last two decades Washington has played its home games at FedEx Field, in a Maryland suburb outside of the District of Columbia. FedEx agreed to pay $205 million in the naming rights deal in 1999. Frederick W. Smith, the chairman and chief executive of FedEx, is also a minority owner of the team.

The team’s lease for FedEx Field runs through 2027, but in recent years it has begun the process of searching for a new stadium, canvassing sites in Maryland, Virginia and Washington. The Washington Post has reported that a stadium in Washington is Snyder’s preference, but this week local elected officials said that a return to the district is off the table unless the team’s name changed.