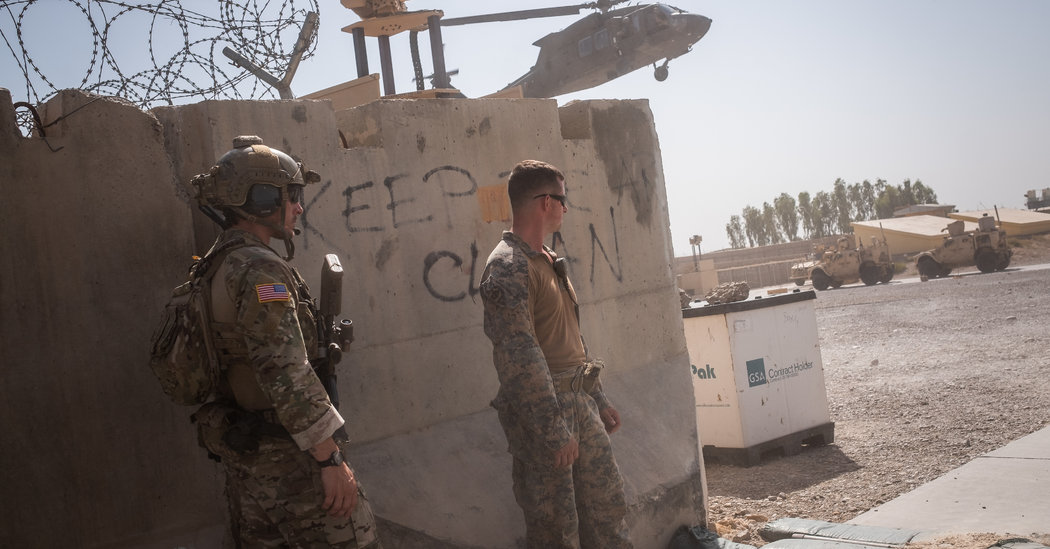 MOSCOW — Three years into a grinding war in eastern Ukraine, the Trump administration, in a sharp break with Obama-era policy, proposed providing the Ukrainian army with potent American weapons, Javelin anti-tank missiles, to aid its struggle with Russian-backed separatists.

President Vladimir V. Putin of Russia responded with an ominous warning, saying weapons in the separatist regions could easily be sent “to other zones of conflict” — which many took to mean Afghanistan.

Russia’s grievances against what it sees as American bullying and expansion into its own zones of influence have been stacking up for decades, starting with the C.I.A.’s role in arming mujahedin fighters who, after the Soviet invasion of Afghanistan in 1979, delivered a fatal blow not only to the invading Red Army but the entire Soviet Union.

A deep well of bitterness created by past and current conflicts in Afghanistan, Ukraine and more recently Syria, where U.S. forces killed scores of Russian mercenaries in 2018, help explain why Russia, according to U.S. intelligence officials, has become so closely entangled with the Taliban. In Ukraine, the Trump administration did send Javelins but with the stipulation that they not be used in the war.

Russian officials and commentators reacted with fury to a report last week in The New York Times that a unit of Russia’s military intelligence agency, known as the G.R.U., had gone so far last year as to pay the Taliban bounties to kill American soldiers in Afghanistan.

They scoffed at the idea that Russia would hire killers from a radical Islamist group that is banned in Russia as a “terrorist” outfit and that shares many views of the Afghan fighters who killed so many Red Army soldiers, and those of Islamic militants who caused Moscow so much pain in Chechnya during two wars there.

In remarks to a state news agency on Monday, Zamir Kabulov, Mr. Putin’s special envoy for Afghanistan and a former ambassador in Kabul, dismissed the Taliban bounties report as “outright lies” generated by “forces in the United States who don’t want to leave Afghanistan and want to justify their own failures.”

Amid a torrent of outraged denials, however, there have been pointed reminders that, in Russia’s view, the United States, because of its overreach overseas, deserves to taste some of its own medicine.

Speaking during a talk show on state television dominated by conspiracy theories about plots by President Trump’s Democratic rivals, Aleksei Zhuravlyov, a member of the Russian Parliament, reminded viewers that as far as Russia was concerned, the United States has long had it coming.

Recalling Operation Cyclone, the C.I.A.’s secret program of support for Moscow’s enemies in Afghanistan during the 1980s, Mr. Zhuravlyov said the United States had “killed thousands and thousands” of Russians. “This is a mathematical fact.”

While dismissing reports of Russian bounties for American scalps as untrue, he said, “Let’s suppose this happened,” and asked how many Americans had perhaps been killed as a result. “Only 22,” he responded.

There is no evidence to date that Mr. Putin signed off on any program to kill American soldiers in Afghanistan, and even independent experts say they strongly doubt he would have done so.

Yet, Russia under Mr. Putin has for years throbbed with real and imagined pain from hurt inflicted by the United States, notably the collapse of the Soviet Union, and a desire to make it pay.

All the same, he said, Russia has been preparing for an eventual pullout by cultivating ties to the Taliban as well as to various Afghan warlords. It has done this with money and other inducements in the hope of shaping future Afghan events and securing a useful instrument to poke Washington.

The Taliban, like many other Afghan groups, he added, has a long record of running protection rackets and taking cash from foreigners, including Russians, Americans and Chinese. “This is what they do,” he said. “They are Afghanistan’s most successful business.”

Russia, he said, “decided that if we can create lots of problems for Americans in Afghanistan, they will create fewer problems for us in Ukraine and Syria.”

Moscow has been reaching out to the Taliban for years, starting in 1995 when Mr. Kabulov traveled to Kandahar, a Taliban stronghold in the south, to negotiate the release of Russian pilots who had been taken hostage.

The pilots eventually got away with their aircraft in what was described at the time as a daring escape. But what really happened is unclear. One thing that seems certain, however, is that this first Russian negotiation with the Taliban revolved around money.

“Everything was based on money,” Vasily Kravtsov, a former K.G.B. officer during the Soviet war and until 2018 a Russian diplomat in Kabul, recalled of the hostage talks.

Mr. Kravtsov denied that Russia had since paid the Taliban bounties for the deaths of coalition soldiers, even as he recalled that Soviet soldiers had been killed in large numbers by American arms supplied to the mujahedin. He said he himself had been wounded twice by weapons “bought with American funds.”

Igor Yerin, who fought in Afghanistan as a young Red Army conscript in the 1980s, said he never saw any Americans on the battlefield but “they were everywhere because of their Stingers.”

Stingers were antiaircraft missiles provided to mujahedin fighters by the United States as part of a covert C.I.A. program. They enabled the mujahedin to shoot down hundreds of Soviet planes and helicopters, turning the tide in the decade-long war.

Now the curator of a small museum in Moscow commemorating the inglorious Afghan war, Mr. Yerin showed off a display of land mines and other weapons sent to kill Russians as part of the C.I.A. program.

Mr. Putin has for years played on this and other sources of Russian pain. Soon after coming to power two decades ago, he pledged support for President George W. Bush in his “with or against us” war on terrorism in 2001 and cooperated with America’s drive to oust the Taliban. But he quickly soured on the idea that Washington could be a reliable partner and began blaming it for most of the world’s problems.

Bristling with wounded pride, Mr. Putin in a fiery speech in Munich in 2007 denounced what he said was a “world of one master, one sovereign” and complained that the “United States has overstepped its national borders, in every area.”

He has been settling scores ever since, often with help from the G.R.U., which even before Mr. Putin took power had won its spurs putting the United States in its place. Since he took office, the military intelligence agency has been accused of involvement in widespread mischief-making, from a bungled 2016 coup attempt in Montenegro aimed at preventing the Balkan nation’s entry into NATO and meddling the same year in the U.S. presidential election.

In a rare recent interview, the former head of the G.R.U., Valentin Korabelnikov, told state television how his officers had in 1999 organized a frantic dash by Russian troops and armor to Kosovo to occupy the airport in the capital, Pristina — just hours before the arrival of NATO forces. The stunt, he said, was “about the prestige of our state” and showing that Russia could not be ignored.

Speaking in his former office at the headquarters of the G.R.U. in Moscow, Mr. Korabelnikov said that his agency had organized many other secret operations but that those could not be revealed.

“The vast majority of operations carried out both by us and our brothers,” he said, referring to Russia’s Foreign Intelligence Service and the Federal Security Service, known as the F.S.B. and headed in the late 1990s by Mr. Putin, “are completely closed, and only the small tip of the iceberg sometimes appears.”

Mark Galeotti, an expert on Russia’s security apparatus who wrote a doctorate on Moscow’s disastrous Afghan war, said “some old war horses” in the G.R.U. could have hatched a scheme to kill Americans as payback for Russians killed with American weapons in Afghanistan. But he said he doubted that such a plan would have been approved by the Russian leadership or executed without approval as a “maverick operation.”

Even Mr. Yerin, the former conscript who lost friends in Afghanistan, recalled that during his tour there, spent mostly near the northern city of Kunduz, he never believed political commissars in his unit who explained the 1979 Soviet invasion was necessary to keep the United States from moving into Russia’s back yard.

“Today, I believe them,” said Mr. Yerin. “Afghanistan is our next-door neighbor,” he said, stabbing with his finger the southern border of the former Soviet Union on a big wall map, “What happens here is our business, not the Americans’.”