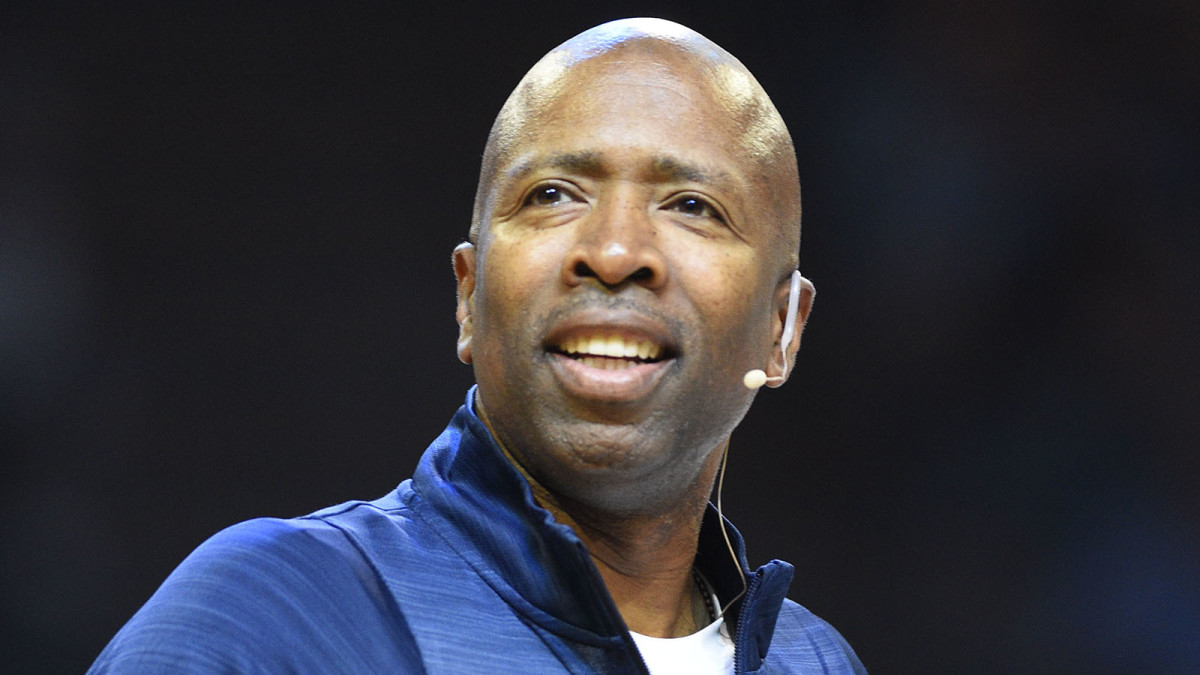 Due to restrictions surrounding COVID-19, which abruptly canceled high school and college basketball seasons, Smith has created The Jet Academy. The virtual camp will work on skills and drills, as well as feature stars from the NBA and WNBA, including Kemba Walker, Sue Bird, Victor Oladipo, Brittney Griner, Trae Young, and Breanna Stewart.

Smith, who is now known for his work as an analyst on TNT’s Inside The NBA, is a two-time NBA champion. He has been running basketball camps for the past two-and-a-half decades in North Carolina, which is where he attended college and was a teammate of Michael Jordan. Smith won back-to-back titles with the Houston Rockets, though he never matched up with Jordan’s Bulls in the NBA Finals.

Smith spoke with Sports Illustrated and discussed his decision to create The Jet Academy, as well as spoke about Bill Russell’s influence on his career and whether his Rockets would have defeated Jordan’s Bulls had they ever met in the championship round.

Justin Barrasso: Basketball camps, especially over the summer, are so ingrained in the game. What led to the idea to create The Jet Academy?

Kenny Smith: I run a basketball camp in North Carolina, that was canceled. I run camps in Europe, those were canceled. I was sitting at home with my 12-year-old and my seven-year-old, and they can’t go to camp. My son was doing an online workout for his team and said, ‘You should do camp like this.’

So we created the first virtual basketball camp with All Stars from the NBA and WNBA. They’re your instructors. It’s live, you can do it on any device, all you need is cell service. You can go to the park, put it on the pole, and do every drill with the NBA players. I’ve got Kemba Walker, Victor Oladipo, Trae Young, Sue Bird, Breanna Stewart, and Brittney Griner, a slew of All Stars and MVPs, and they’re your personal trainers. COVID and social distancing shouldn’t stop your development as a player.

Barrasso: When did you fall in love with the game of basketball?

Smith: I grew up in New York City, so there’s a basketball court every three blocks. I fell in love with the game, initially, due to proximity, and summer basketball is when I became a better player. We had a saying, ‘In the winter, teams are made–but in the summer, players are made.’ That’s why I started Jet Academy. You can’t get better right now with social distancing. So how do you do that? And why not do it with the NBA and WNBA’s best?

I was talking to Kemba Walker and I said to him, ‘You’ve got to show everyone the pull-back, the one where you make everyone fall when you go full-speed and then back between your legs.’ Then I said, ‘You also need to tell everyone when and why you do it.’ And he’s like, ‘You want me to give away all the secrets?’ That’s what this is all about. It’s about creating a community virtually in our camp and giving people the chance to do things no one else can do.

And Shaquille O’Neal called me the other night. This was a two-minute conversation. Get the Shaquille voice in your head–he said, ‘That’s a great idea. I want to sponsor it.’ I thought that was so cool. He’s giving a discount to the first 10,000 kids who sign up. He said, ‘Just have a discount called BIGSHAQ,’ and then he hung up. That was the whole conversation. So we created this ‘BIGSHAQ’ code for $35 off.

Barrasso: It’s wonderful that Shaq is stepping up. But when you think of Kenny Smith, you immediately think of Charles Barkley. Will Charles also be involved?

Smith: I’ve got to call Charles. He won’t let Shaq out-do him, no question. But this is right in Shaq’s wheelhouse, too.

Barrasso: On the subject of basketball legends, you were a teammate of Michael Jordan during your freshman year at the University of North Carolina. That Tar Heel team was ranked number-one in the preseason, but the season ended with a loss to Bobby Knight’s Indiana Hoosiers in the NCAA Tournament. Sometimes you remember the losses better than the wins–what do you remember about that game?

Smith: One, I just remember that Michael Jordan borrowed my belt to dress up to get to the game. I still haven’t got it back [laughs]. Secondly, and more importantly, I knew we were the better team. However, that year, I had broken my wrist. I’m not saying that because I broke my wrist, we didn’t win. I wasn’t the best player. But I put everyone in the right spots. So Michael never had ballhandling duties, unless to score, when he played with me when I was a freshman. Sam Perkins, those entry passes were from me. I just let everyone be themselves. That’s why it’s so hard to win NBA championships and college championships, because one thing can throw everything off. I was the piece the made our best two-guard be a two guard, our best small forward be a small forward. But when I got hurt, everyone had to do some more duties that, at that stage in their careers, they weren’t comfortable doing. And that’s how they got us.

Barrasso: You know Jordan so well, and your insight would have been invaluable to ESPN’s Last Dance documentary. Jordan won six championships in the NBA, but never defeated your Houston Rockets in the Finals. And those two seasons Houston won back-to-back titles were in ’93 against New York, when Jordan was playing baseball, and ’94 against Orlando, who had knocked out Jordan and the Bulls in the conference semis.

If Houston and Chicago met in the Finals sometime between 1991 and 1997, would the Bulls have had an answer for Hakeem Olajuwon?

Smith: Without question, we would have won at least one of those championships. Without question. And the reason I say that is because there are three things that are really valuable information that gets lost. Even in the documentary, we were kind of glossed over. Like, ‘Oh, what happened in those two years he was gone?’ They never talked about it.

We went 5-1 [from the 1990-91 season through the 1992-93 season] against the Bulls in three seasons. They had a difficulty matching up with Hakeem in the interior and our speed on the outside. It was difficult for them. And we added Sam Cassell and Robert Horry. That’s the first part. The second part is the year he came back as number 45 [in 1995], Horace Grant was in Orlando and Dennis Rodman was still in San Antonio. They were too small to play against Hakeem.

Michael’s the greatest player I’ve ever seen in my life. No question about that. But that wasn’t the greatest team. We would have gotten that team. Now when they got Rodman, they got big enough and agile enough again. They went through the league easily. But when he was wearing number 45 and lost to Orlando, even though he was averaging 30 points a game, they lost because they were too small and couldn’t offensive rebound. They couldn’t do the things needed to get second shots for the greatest player in the history of the game. That Orlando team they lost to, 4-2, we swept. We didn’t have any trouble with them. That shows we would have won.

Barrasso: Your basketball portfolio is incredible. You played against so many legends, as well as played for the legendary Bill Russell during your rookie season in Sacramento. That Kings teams wasn’t successful, but there were lessons from Russell that you carried throughout your entire career. What has Russell meant to you?

We used to talk basketball and talk about life. And he said one thing that stuck with me forever. I was complaining about how a lot of European basketball players were coming into the league. I remember saying something like, ‘You’re flying to obscure places, getting players from Turkey, and you’re telling me that there isn’t a guy in Alabama just as good?’ And he stopped me and said, ‘Kenny, you have to stop that.’ He looked at me real sternly and said, ‘As a black man, you can never argue about inclusion.’ That changed my perspective on everything.

Barrasso: The NBA is bigger than the game of basketball. What do you think of the league’s decision to use its platform to highlight racial equality and social injustice?

Smith: I look at it this way. Everyone’s ears are open now–people are listening, they’re paying attention. Everyone’s alerted about social injustice. So what are we going to do now that we’re alerted? That’s why this is the time for the NBA to do that.

Barrasso: Stopping the season and starting up again is a tall task. Given what we know, who is your current favorite to win the NBA Finals?

I will say that the young teams have a better chance. The Boston Celtics, the Milwaukee Bucks, the Denver Nuggets, they have a much better chance now. Youth starts out fast. Even LeBron-led teams have eased into getting into shape, they haven’t always started out fast. Now you have to start out fast.

Barrasso: If you’re serious about getting better, whether you play in high school, college, you coach or even play for fun, what makes The Jet Academy worthy of people’s investment?

Smith: We’re going to be your personal trainer. You’re going to learn things about the game and have great conversation. I can’t wait to see everyone there.