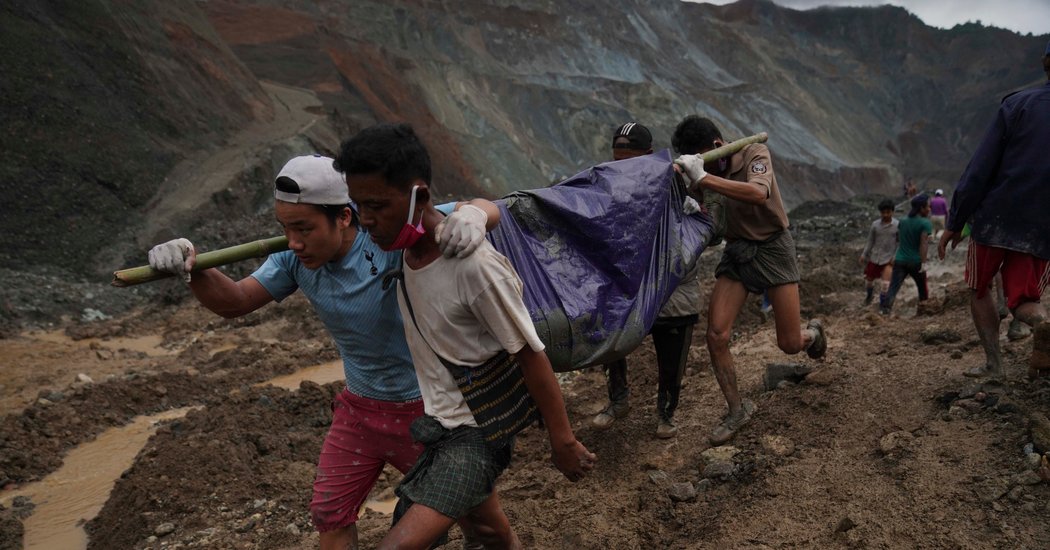 MANDALAY, Myanmar — An ominous rumbling was the only warning the young jade miner had that something was wrong.

Within seconds he was running, but before he could take even a few steps he was swept away by a huge wave of mud and water. Tumbling underwater, he managed to reach the surface, swimming for half an hour before finding land.

“I thought I would die,” said the miner, Ko Aung Kyaw Htay, 23, on Friday, a day after the disaster at Wai Khar mine in northern Myanmar left an estimated 200 people dead. “I still can’t believe I escaped. I have no idea what happened to the other people working around me. I guess they all died.”

Mr. Aung was one of hundreds of unauthorized jade pickers scavenging on the edges of the Wai Khar open-pit mine in Kachin State, the lucrative center of Myanmar’s jade trade where rebels and government forces are facing off, when disaster struck. Heavy rains from the annual monsoon had filled the giant mine with water, creating a lake. Just after sunrise on Thursday, a wall of the mine collapsed, crashing into the lake and generating a wave more than 20 feet high.

He survived with only scratches. But he saw no sign of 50 other miners who were working nearby when the wave hit.

By Friday afternoon, searchers had recovered 172 bodies floating on the lake or washed ashore at the mine in Hpakant township. An additional 54 were injured.

Similar disasters are an almost annual occurrence in the jade fields of Myanmar, which produce about 70 percent of the world’s jade and generates billions of dollars a year. Most of the jade mined there is exported across the border into China.

The jade industry, largely controlled by the military and its crony companies, operates in near secrecy. The military is in constant conflict with rebel groups in the region, including the Kachin Independence Army, which is seeking self-rule and is said to extract its own revenues from mining operations.

Jade pickers say that the rebel group assesses fees for letting them operate on the fringes of the government-authorized mining operations.

About 300,000 miners come from all over the country to hunt for jade — about two-thirds of them working illegally — even though it is extremely hazardous.

Small landslides, which go unnoticed in the outside world, kill 100 or more miners a year. Major mine collapses, like the Wai Khar disaster, occur nearly annually.

“Actually people are dying from accidents almost every day here,” said U Tin Soe, who represents the region in Parliament. “We just don’t have a record of it.”

The Wai Khar mine, which is operated legally by a consortium of five companies, had officially shut down Tuesday for the rainy season because of the danger of landslides. It will reopen in October.

But the jade pickers — who often work for local bosses and must pay a share of their earnings to rebel groups that operate in the area — immediately moved into the mine this week despite the risk.

Mr. Tin said the nature of the region and the miners’ desperation make it difficult to prevent frequent disasters.

“There is no rule of law in this area,” he said. “All the miners have to take responsibility for the continuous landslides in Hpakant. It happens because of their greed. Nobody can stop it.”

Moe Thandar and her younger brother, Moe Myint, came to Hpakant two years ago from the city of Thandwe in Rakhine state to work as unauthorized jade pickers.

Mr. Moe Myint, 20, began work early on Thursday at the Wai Khar mine. His sister, 28, learned of the landslide around 8 a.m. and raced there.

She found her brother lying on the ground in a row of dead bodies.

“That moment was like the end of my world to see my little brother lying there,” she said. “I feel like someone took my life too.”

She said she worried that her aging parents would be overcome by grief at hearing the news.

“We just wanted to have enough money to survive,” she said, crying. “But our lives are gone.”

Myanmar, also known as Burma, was controlled for decades by the military, which still maintains vast authority and operates autonomously under the 2008 Constitution that it enacted.

The military owns two large conglomerates, which have extensive operations in a wide range of businesses, including jade.

A study by the anti-corruption group Global Witness found that Myanmar’s jade business was worth as much as $31 billion in 2014, almost half the country’s gross domestic product.

“The government has turned a blind eye to continued illicit and rapacious mining practices in Hpakant despite vowing to reform the hazardous sector,” said Paul Donowitz, campaign leader at Global Witness. “This was an entirely preventable tragedy that should serve as an urgent wake-up call for the government.”

Mr. Aung, the survivor of the Wai Khar disaster, moved to the region three years ago from the city of Magway in central Myanmar.

Until a few months ago, he worked independently as a jade picker and said he had to pay a share of his earnings directly to the Kachin Independence Army. His biggest find was a piece of jade he sold for $2,200. He said he paid nearly $600 of it to the rebels.

“People from the KIA are everywhere and they can smell who is selling the jade and who has the good quality jade,” he said, referring to the rebel group. “If you don’t pay you will be shot and die anonymously.”

Mr. Aung said he recently decided to work for a local mining boss because he could no longer make it on his own after the economic downturn caused by the coronavirus pandemic.

Myanmar has been largely unaffected by the virus, at least according to official data, with only 304 reported cases and six deaths in a population of 54 million.

But the pandemic has largely shut down the global market for jade, especially in China, and Mr. Aung said he could not survive without buyers.

The boss, who operates outside the law like his pickers, typically pays for food and a place to stay and keeps half of whatever they find.

Despite Mr. Aung’s narrow escape, and the scratches on his arms, legs and face, he has no intention of quitting.

“There is no other job for me,” he said. “It’s better to die than to live with nothing to eat. I know this work is very dangerous, but living in hunger is just as dangerous.”

And unlike on other jobs, if his luck holds in the jade mines, he hopes one day that he will strike it rich.

“If I find a good quality, high-price piece of jade,” he said, “my dream is to buy a house in my hometown and marry a beautiful girl.”