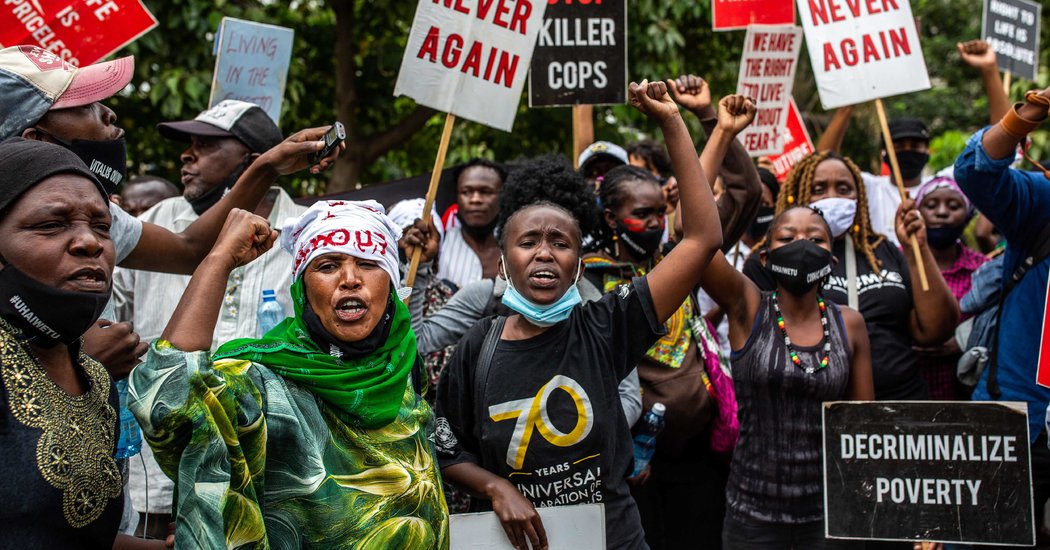 NAIROBI, Kenya — Kenyan and American protesters knelt outside the United States Embassy in Nairobi one morning last month, outraged at George Floyd’s killing and the racism and brutality they saw across the Atlantic. But they were also furious about police abuses at home, in Kenya.

Protests sprang up all over town. In the large slum of Kibera, in front of a large mural of Mr. Floyd, residents chanted, “Stop killing us.” In front of Parliament, youths carried caskets to protest extrajudicial killings.

“The image of George Floyd’s death was so visceral, so violent,” said Lilly Bekele-Piper, an Ethiopian-American who lives in Kenya and brought her four children to the protests. “People came out because they recognize that violence in their own communities.”

Outrage over Mr. Floyd’s death has rippled throughout the continent, with Africans invoking the Black Lives Matter movement to call attention to abuses in their own countries and demand that the police be held to account.

The protesters also point to the enduring legacy of European rule. Many African countries’ police forces were established in the colonial era and, analysts say, are still used by governments as an instrument of repression and control.

Sick of killings, torture and beatings meted out, citizens are increasingly trying to push governments to reform the abusive institutions they inherited from colonial rulers.

As in the United States, greater scrutiny — often enabled and amplified by social media — has sometimes led to the police being held accountable for their actions. But there has been little attempt at systemic change.

Africans have long feared the violent methods used by police forces on the continent, but their alarm has become more immediate in recent months as the new coronavirus has taken hold, and governments have used heavy-handed tactics to enforce lockdowns.

At the onset of Kenya’s overnight curfew in March, officers enforcing the restrictions shot and killed 13-year-old Yassin Moyo while he stood on his family’s balcony. In late June, three people were killed in a small town in Kenya’s Rift Valley after a confrontation with the police over face masks.

In Uganda, security forces were accused in late March of shooting at construction workers and beating vegetable vendors who had not shut their businesses. Ugandan activists, including the prominent academic Stella Nyanzi, were arrested in May while protesting the lack of food being distributed to those in need.

The Kenyan activist Boniface Mwangi is among those who have placed the abuses against a broader backdrop, calling for the police to be “decolonized” and retrained to safeguard people’s rights.

Police forces across the African continent were established by colonial rulers to “conquer, repress, and dominate” the people, said Ruth Joyce Kaguta, who teaches criminology and law at Dedan Kimathi University of Technology in Kenya. “They were not created for the people.”

Most African countries gained independence in the 1960s, and their police forces are no longer foreign: Officers, superintendents and inspectors general are all citizens of the countries in which they work.

But successive governments have not reformed the colonial-era police structures they inherited, so police cadets in some cases are still taught that members of the public are “enemy No. 1,” said Agatha Ndonga, the head of the Kenya office of the International Center for Transitional Justice.

“They did not change the attitude and culture of policing,” she said. “They don’t look at us as persons whom they should protect.”

Reform has been slow in Kenya and elsewhere on the continent, Ms. Kaguta said, largely because presidents since independence have seen that using the police to repress citizens can help them stay in power.

In the early 1990s in South Africa, Nelson Mandela’s government did try to turn the apartheid government’s 11 abusive police agencies into a single entity aimed at serving communities.

But by 2010, fatigued by violent crime, the police and the government “abandoned the language of service and returned to apartheid’s signifier of force,” said Andrew Faull, author of “Behind the Badge: The Untold Stories of South Africa’s Police Service Members.” Afraid of losing their jobs, officers did not challenge the culture.

“Abuse of force was tacitly accepted by many, in part justified by a belief that many South Africans think ‘criminals’ deserve violent punishment,” Mr. Faull said in an interview conducted in writing.

After Kenyan police killed protesters in the aftermath of disputed elections in December 2007, there were efforts at reform, but they were very limited.

But the police today face greater public scrutiny as more people across the continent buy smartphones. They film, upload and watch videos of the police attacking civilians on Facebook and WhatsApp.

These videos circulate so fast, Ms. Ndonga said, that “there’s no way they can deny it’s happening. And of course, it makes them have no choice but to go and now start conducting investigations.”

Responding to the cases that catch the public’s attention can yield haphazard results.

With many Kenyans calling for justice for Yassin Moyo, the 13-year-old killed on his balcony, the case moved exceptionally quickly: An officer was charged with murder and arraigned in court within weeks. In less famous cases, the process can take more than a year.

When video circulated of law enforcement officials from Cape Town in South Africa violently evicting a naked man from his home, a shack they wanted cleared from a township, the officials responsible were suspended. But violent evictions of South Africa’s poorest Black citizens are common.

In Nigeria, the police immediately announced an investigation into Tina Ezekwe’s killing, and said two officers had been arrested.

But accountability is very rare for abusive police units in Nigeria, in particular the Special Anti-Robbery Squad that is tasked with fighting violent crimes, according to a new report from Amnesty International.

In some cases, police forces facing criticism have doubled down. When a Gambian man was recently shot by the police in the United States, the government of the West African country called for an investigation. But when the activist Madi Jobarteh called for justice for victims of police brutality at home in Gambia, as well as in the United States, he was arrested.

Some see hope for systemic change in the period of reflection that the protests over George Floyd’s killing have produced, in Africa as well as America.

Besides Kenya, demonstrations against Mr. Floyd’s death and in solidarity with American protesters have taken place outside U.S. embassies in Nigeria, Ghana and Liberia. In Dakar, Senegal’s capital, 50 protesters took a knee in June while facing the Atlantic Ocean, America on its long-distant horizon.

“Black lives in our country can feel unsafe,” said Ms. Bekele-Piper in Nairobi. “To me, these are vestiges of colonialism and now that we have the attention of the world, we have the chance to push against it.”