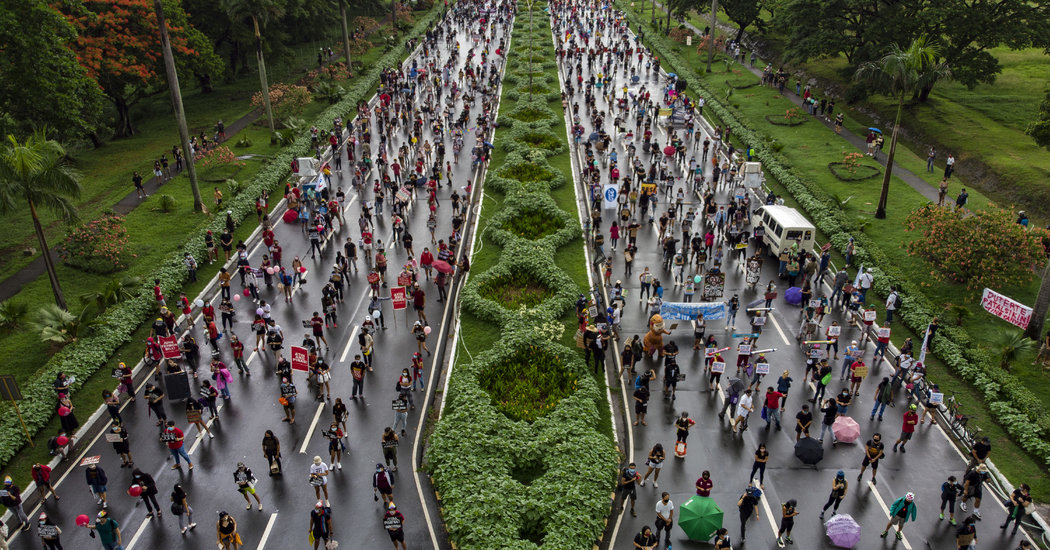 Muslims living in the southern Philippines have spoken out forcefully against the legislation to broaden powers of arrest and detention. On Friday, a regional government in the southern island of Mindanao that includes former separatist rebels urged Mr. Duterte’s government not to go through with the measure.

Rights groups and activists assert that the new law is designed to give Mr. Duterte’s police and military forces more powers to stifle dissent against his populist rule amid his war on drugs, which has killed thousands of people.

Mr. Duterte’s spokesman, Harry Roque, said the new law was necessary to crack down on terrorism. “Terrorism, as we often said, strikes anytime and anywhere,” Mr. Roque said. “It is a crime against the people and humanity. Thus, the fight against terrorism requires a comprehensive approach.”

He stressed that terrorist acts in the Philippines have long “caused unimaginable grief and horror,” and added that the president and his legal team carefully reviewed the legislation before he signed it into law.

The law was signed days after the police and military forces killed four people believed to be Filipino militants linked to the Islamic State during a raid in Manila.

The militants were suspected of working as financial conduits for the local branch of the Islamic State, according to the military. Officials said they were working with Mundi Sawadjaan, one of the accused plotters behind the January 2019 bombing of a Catholic cathedral on the southern island of Jolo that killed 23 people.

The attack was carried out by an Indonesian couple wearing suicide vests. They were believed to have been directed by Hatib Hajan Sawadjaan, the leader of the Islamic State in the Philippines and Mundi Sawadjaan’s relative.

On Friday, Edre Olalia, of the National Union of Peoples’ Lawyers, said the group would challenge the “draconian law.”

“This without a doubt is the most unpopular and perilous piece of legislation that could ever be pushed by a government that is fixated with the potion of power,” said Mr. Olalia, whose group represents activist and indigent groups.

Human Rights Watch said the new law gives security forces the power to arrest activists, journalists and social media users by simply saying that they are suspected of terrorist activities.

“The law threatens to significantly worsen the human rights situation in the Philippines, which has nose-dived since the catastrophic war on drugs began four years ago,” said Phil Robertson, deputy Asia director for the group.

He said the law gave the green light for the “systematic targeting” of Mr. Duterte’s critics, as well as random, ordinary Filipinos who speak out against the his government.

Earlier this week, Michelle Bachelet, the United Nations high commissioner for human rights, released a report that attributed thousands of “systematic” killings that were done with “near-total impunity” to Mr. Duterte’s war on drugs.

“The campaign against illegal drugs is being carried out without due regard for the rule of law, due process, and the human rights of people who may be using or selling drugs,” she said.

Ms. Bachelet cited “an unwillingness by the state to hold to account perpetrators of extrajudicial killings,” and had urged Mr. Duterte not to sign the antiterrorism bill, which she said blurred distinctions between what is criticism of the government and what is terrorism.