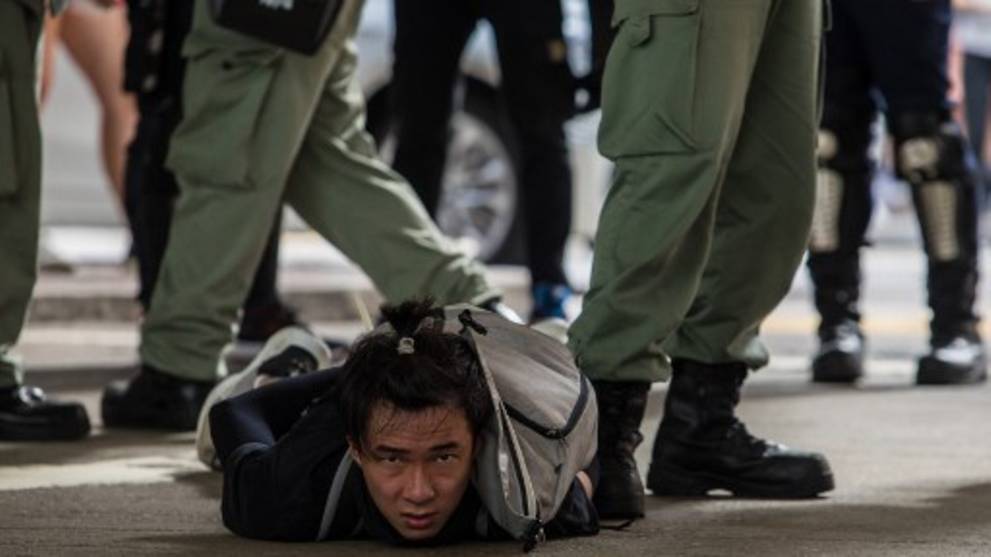 The United Kingdom is leading allies in offering nearly half the city’s 7.5 million people a potential pathway to British citizenship, with strong indications Australia, Canada, New Zealand and the United States may also offer some form of asylum.

In a direct challenge to China, members of the so-called Five Eyes alliance have framed the move as a moral imperative – a bid to help Hong Kong residents escape the clutches of a police state.

Speaking in parliament, foreign secretary Dominic Raab said Britain had a duty of care to residents of a colony it handed back to China in 1997.

He said the country would allow anyone with British National (Overseas) (BNO) status – and their dependents – to come to the UK and eventually receive citizenship. That is estimated to be more than 3 million Hong Kong residents.

In the US, a cross-party group of prominent senators this week proposed legislation giving an unlimited number of Hong Kong protesters a fast-track to refugee status.

Australia hinted strongly that an offer of safe haven would be made in the coming days while Canada has quietly emerged in recent months as a potential sanctuary with at least 50 Hong Kong residents lodging asylum applications according to local activists.

In the run up to the 1997 handover, hundreds of thousands left Hong Kong, mainly to join large Cantonese communities in Australia, Canada and the US. But many returned in the intervening years.

This time around Britain’s offer is the most comprehensive.

BNO status is open to anyone born before Hong Kong’s 1997 handover to China.

There are currently some 300,000 BNO passport holders, but around 2.7 million Hong Kongers are eligible to apply and there has been a rush of new applications.

“I will depart as soon as possible to start a new life in the UK using the scheme,” Asuka Law, a recent university graduate, told AFP, adding she was “immensely grateful” to Britain and expected to leave in the autumn.

An accountant who only gave his first name Sam said he was torn.

“I still love Hong Kong very much,” he said. “But I’ll reapply for the BNO passport first and decide after the details are confirmed. It gives us one more way out.”

On Thursday, prominent activist Nathan Law confirmed he had fled the city to an undisclosed location overseas.

READ: World should stand up to China over Hong Kong: Activist Nathan Law

Hui Feng, a political expert at Australia’s Griffith University, said an influx of Hong Kong residents to economically troubled Britain “could lead to concerns for a surge in supply to an already tight labour market”.

“But the latest poll suggests that the majority of Britons approve the government’s decision on this,” he told AFP.

Yet behind the dramatic invitations – and the potential rewards of attracting an influx of well-educated, often English-speaking and wealthy emigres – experts wonder how many Hong Kong residents can or would leave.

Many of those involved in the protests are youngsters from blue-collar families with limited resources to upend their lives.

“Abandoning your home, friends and family, potentially forever, is not an easy decision,” Ben Bland, author of a book on young people and identity in Hong Kong, told AFP.

“Setting up a new life overseas will be even harder in the midst of a global pandemic and deep recession. And many activists still want to stay and fight for their city.”

In an interview earlier this week Raab admitted there was little London could do if China simply stopped Hong Kong residents from leaving.

“Ultimately we need to be honest that we wouldn’t be able to force China to allow BNOs to come to the UK,” he said.

And while sanctions are an option, there is a high chance they would disrupt Western businesses operating in Hong Kong just as much as Chinese ones.

A student born after 1997 and not eligible for the passport said she had no plans to leave.

“We shouldn’t be especially happy about the news,” the student, who gave her nickname Blue, told AFP when asked about Britain’s BNO offer.

“We should stay here and fight for our place,” she added.