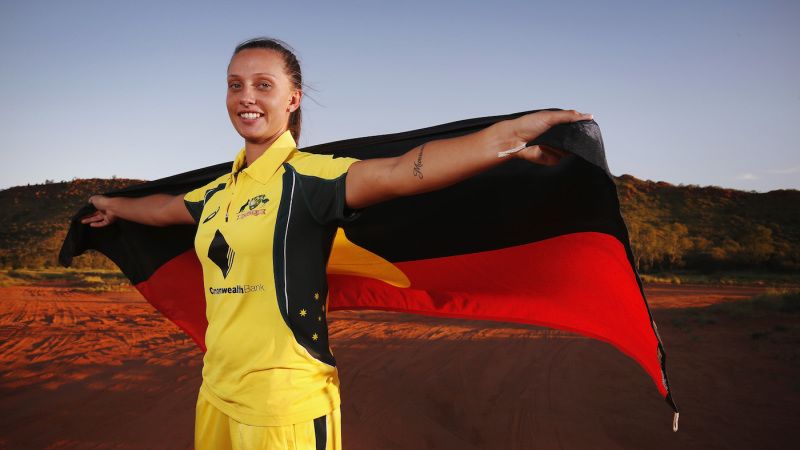 When the Johnny Mullagh Medal is presented to the Player of the Match at the end of the Boxing Day Test between Australia and India this summer, it will not only signify the contribution of Indigenous Australians to the national game, but also provide a sharp reminder of the hole that remains at cricket’s heart in this country.

At a time when issues of racial inequality have been given fresh impetus by the Black Lives Matter movement, last year’s decision to create the Mullaugh Medal in recognition of the captain of the all-Indigenous side to England in 1868 that was the first Australian side of any kind to tour internationally, cannot obscure the fact that the chances of any indigenous players vying for it are slim.

Australian cricket has seen an increase in the number of players on state and W/BBL lists: D’Arcy Short, Dan Christian, Josh Lalor, Brendan Doggett, Scott Boland, Emma Manix-Geeves, Ashleigh Gardner, Hannah Darlington and Mikayla Hinkley were all contracted in various forms last season. And Cricket Australia, through a series of programs and reports over the past 20 years or more, have pushed towards ever greater representation for Indigenous cricketers, taking cues from the pioneering experience of Aunty Faith Thomas in particular.

But the fact remains that Jason Gillespie is still the only Indigenous cricketer to enjoy the sort of Test career that might have included winning the Mullagh Medal, and a greater reckoning with Australian cricket’s past sins in areas of race and inclusion is still some way from taking place. This may well have as much to do with reconciling the history as it does with augmenting existing programs.

It is jarring to note that a little more than two months before CA announced the Mullagh Medal, a pioneering indigenous cricketer and administrator, John McGuire, asked that his name be removed from the trophy awarded to Western Australia’s Under-15s premier cricket champion side.

“I felt it was a token gesture and I don’t think the WACA is fair dinkum about Aboriginal inclusion, so I don’t want my name attached to this award,” McGuire had told the Sunday Times. “For the past 40 years of my life, I’ve been trying through the WACA to encourage and create a pathway for Aboriginal cricketers and unfortunately, nothing has been done. It’s fallen short simply by exclusion. There’s plenty of talent out there, it’s just never been tapped. It’s appalling. The game needs an icon that little Johnny in Kellerberrin or Billy down at Albany or Freddie in Meekatharra can see playing for the state so they know they can do it too.”

Over a lengthy career as an opening batsman in Perth grade cricket, McGuire accumulated more than 10,000 runs without once being chosen for his state. His encouragement to retire while batting well in a state trial match in the mid-1980s has been previously documented, but in a recent BBC interview he also noted how there were other times when he felt as though there were greater barriers to his elevation than the simple metrics of performance.

“Let’s be honest about it, cricket hasn’t been a game for all Australians. Aboriginals think cricket is a white fella’s sport, because we don’t see black players in the team. That is why West Indies were my team. I could identify with them”

John McGuire in The Cricket Monthly in 2015

“We don’t embrace the Aboriginal cricketers like the football codes have done, and the opportunities have been very limited and indeed my own personal story is one of disappointment in that there was this covert racial sort of undertone that excluded you,” McGuire said in an interview with Ali Mitchell. “I was getting messages like ‘oh John you’re one big score away from selection’, and that would happen and then the goalposts would change and there’d be another reason for non-selection. I can remember rolling up to state cricket training and as an opening batsman I expected I would bat fairly early in the afternoon or evening, certainly in the afternoon against the best bowlers.

“But it’d be almost dark and the coach would say ‘oh John, put the pads on’ and Geoff Marsh, Mike Veletta and some of those guys would be bowling at me, and it’s like ‘hang on, how can I develop my game against non-bowlers, why am I batting this late in the afternoon/evening, when as an opening batsman I expect I should be batting fairly early in the training session against the best bowlers.

“There was always the racist comments and being called black and laced with expletives and derogatory comments about the colour of my skin, but there wasn’t anything from the state selectors or from the WACA as such as the governing body of the game here in Perth. So there was nothing that was tangible or evident, but the underlying view was that ‘we’re not going to play this bloke, it doesn’t matter how many runs he makes’.”

An element of McGuire’s story that is especially difficult to fathom is this: during the same period in which he vied for WA selection, Kim Hughes, Greg Shipperd, Tom Hogan and Terry Alderman were all banned from playing for the state while going on lucrative “rebel” tours of apartheid-era South Africa in 1985-86 and 1986-87. All then played for WA again once their bans elapsed, and Alderman went on to a triumphant 1989 Ashes tour. McGuire, then, was not only surplus to a weakened squad, but also behind the returned rebels; his only recognition was to be as captain of an Indigenous team to England, in 1988.

WA’s state coach at the time, Daryl Foster, has denied any prejudice against McGuire, and in a response to the BBC interview, the WACA stated that it could not comment on selection decisions “made in the last century”. Nevertheless, there are those within Australian cricket who believe that McGuire is owed an apology, or a chance to make his story more widely known and understood as a way of helping current generations of selectors and talent spotters ensure they do not make similar oversights, or worse.

For the Love of the Game

This is not to say that CA has lacked a desire to explore the past and make better decisions for the future. Indigenous involvement in cricket has been tracking in a positive direction for the past three to four years following on from a landmark report, For The Love of the Game, that CA published in conjunction with Canberra’s Australian National University in October 2015.

To read its many raw passages five years on is to be hit by the sorts of uncomfortable truths that CA was later to experience in the Ethics Centre cultural review of the governing body in 2018; the major difference being that the report on Indigenous cricket received little to no fanfare. Nevertheless, its examples of racism both subtle and overt, would sting any reader. Examples of overt racism quoted in the report included this from a club player: “One guy said to me on the field, ‘what are you playing cricket for ‘boong boy’? Go play rugby league with ya coon mates.”

Another example had a player keeping their Aboriginality a secret on the basis of what teammates said of other black players: “I’m the only Aboriginal player in the team [although my teammates didn’t know that]. I didn’t feel welcome or comfortable and was too scared to let anyone know. They [my team] were filthy with their mouths – I remember them bagging out a black guy from another team, really badly, and I was just ashamed.”

One instance, in which the “fines committee” common to so many teams was used as an instrument of discrimination, built up over time to the point that the player concerned got out of the game entirely: “One of the things that happened to me was that the boys had this system where you would get fined two bucks for every stuff up you made. You know, if you dropped a catch or something you got fined two dollars. Well, every week I got fined four dollars at the get-go for being Aboriginal. Everyone thought it was hilarious. I’d kind of laugh along, but it really started to get to me, you know. I never said anything though ’cause in a way the blokes thought it was kind of including me, but it actually really hurt me. I hated that s*** and it went on for ages.”

Areas of governance and funding were also closely examined, from the states of disrepair many state Indigenous cricket advisory councils had fallen into, to the troubling issue of funding for the annual Imparja Cup carnival in the Northern Territory generally scooping up all but a comically small amount of annual budgets. The underlying message, inked clearly into the report, was as follows:

“Across all levels of the game, there was consensus that Aboriginal and Torres Strait Islander people were not being included enough or were actually being excluded. The pervasive feeling that Indigenous cricket was just an ‘add-on’ or was not something really important was conveyed to us at all levels of the game, from young Indigenous players through to cricket administrators and by those in charge of administering Indigenous cricket throughout the states and territories.”

As a result of this report, plenty has changed in terms of additional funding and better organisation, plus more visible manifestations of the indigenous contribution to cricket, whether it be the bat artwork championed by Christian, Indigenous designs on Australian limited-overs uniforms, or the Mullagh Medal itself. Most critically, the onset of Covid-19 has not caused a dive in funding to CA’s efforts in the area.

Investment maintained in the time of coronavirus

While national Under-15s, Under-17s and Futures League or 2nd XI tournaments have been canned by way of cost-savings for next season, the National Indigenous Championships have been retained. Similarly, a host of measures from CA’s most recent national reconciliation action plan will continue to be rolled out across the country.

Most importantly, though, is the acknowledgement within the plan’s pages that change is as much about listening as it is about acting. To that end, the examples of McGuire and a host of others need to be keenly heeded, whether they call for fresh investment, new ideas or, perhaps more painfully, a greater willingness to examine and admit to past failures. If Indigenous experiences of cricket have involved pain or discrimination in any way, then ultimately cricket failed them and needs to right those wrongs.

Those present at the 2007 edition of the Imparja Cup can recall the emotional response of many cricketers taking part when they watched, live, the apology of the then Prime Minister Kevin Rudd to the stolen generations – an anniversary of which more could be made. It’s a strong reminder of the fact that in bringing Indigenous Australia more closely into cricket, acts of recognition can go a long way towards building trust and ultimately making peace with the past.

Otherwise McGuire’s overview of why so few Indigenous cricketers have reached the top of the game, told to Tristan Lavalette in 2015, will continue to be true: “Let’s be honest about it, cricket hasn’t been a game for all Australians. Aboriginals think cricket is a white fella’s sport, because we don’t see black players in the team. That is why West Indies were my team. I could identify with them. Programs can encourage participation, but kids need to know that if they play they can get to the top – whether for their state or country. We need a role model to inspire a generation of Indigenous kids.”