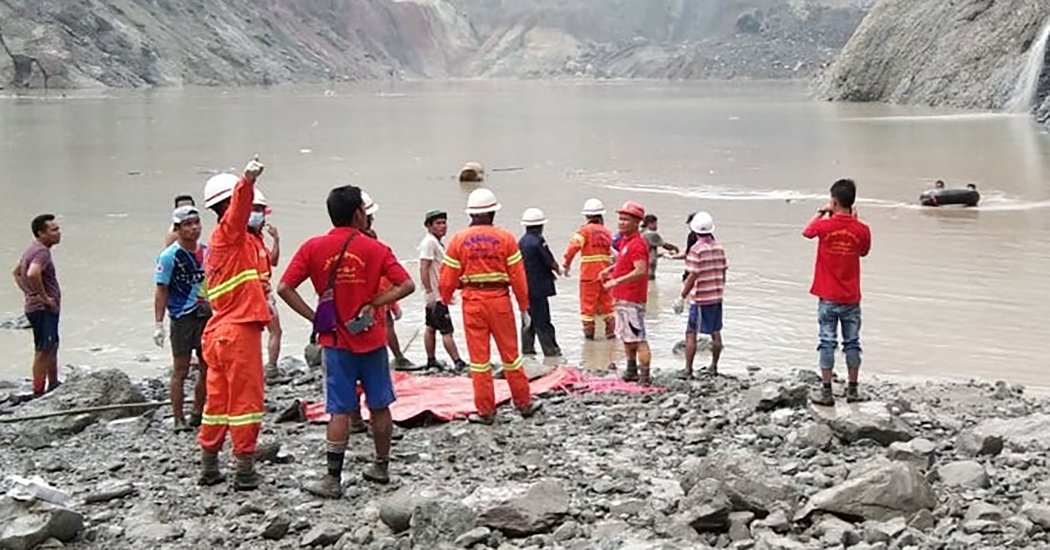 MANDALAY, Myanmar — At least 113 miners were killed on Thursday and scores remained missing in northern Myanmar after a huge pile of muddy waste at a jade mine collapsed into an open pit, triggering a deadly wave, an official said.

The disaster occurred after a heavy rainstorm in Hpakant township in Kachin State, where miners labor in notoriously hazardous conditions to produce jade worth billions of dollars.

The death toll, which is expected to rise, was confirmed by U Tin Soe, the region’s minister of Parliament.

The pile of mine waste known as tailings was more than 250 feet high when it collapsed into an open-pit mine where a lake had formed from recent rains, unleashing a tsunami. The wave overtook many of the miners, who drowned in the muddy water.

Video footage of the collapse showed the wave rising dozens of feet high as the green water swept from one end of the mine to the other. Photos from the site showed the bodies of more than 30 miners laid out in rows on the rocky ground as dozens of men stood by.

“At least 200 will be killed from this,” said U Kyaw Min, administrator for Wai Khar District. “We’re working on the rescue and picking up dead bodies.”

He said the continuing rainfall was hampering the search-and-rescue effort.

“We can’t go deeper to rescue, so we have to pick up the floating dead bodies,” he added. “It’s also difficult to send the patients to hospital because the roads are muddy because of the rain.”

Mine collapses are a frequent occurrence in the jade mining region of Kachin State. More than 50 died in a tailings collapse last year, and dozens were swept away the year before. At least 120 were buried in 2015 after the collapse of a mound of tailings.

Kachin is Myanmar’s northernmost state and borders China and India. The state, which is rich in natural resources, has been racked by fighting between the military and ethnic rebels, but the lucrative jade mining area has largely remained under government control.

Despite attempts to regulate the industry, much of the mining there is done illegally by wildcat miners.