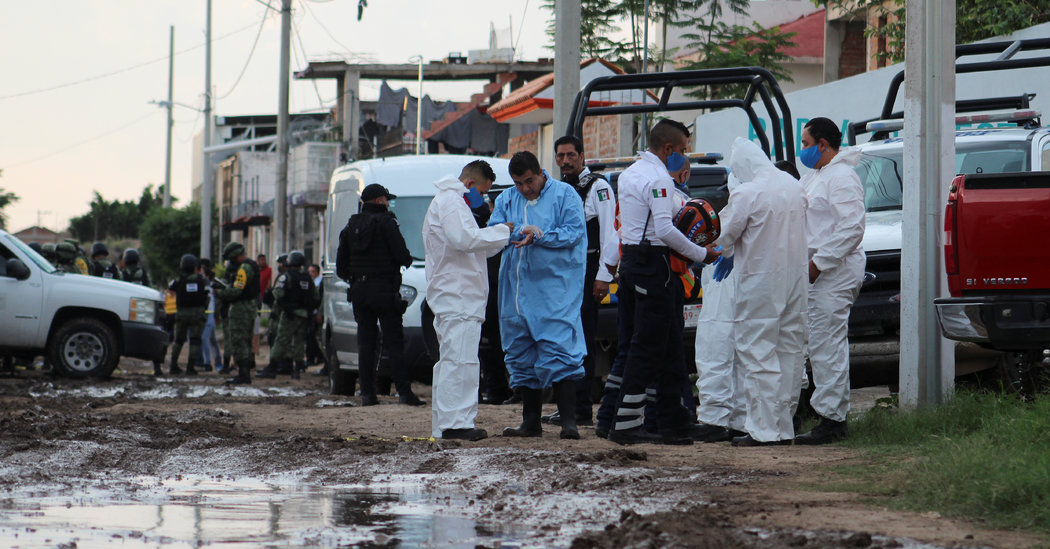 MEXICO CITY — Armed men stormed into a drug rehabilitation facility in central Mexico on Wednesday, killing 26 men and gravely wounding five others, in what the authorities said could be part of a fight over territory between rival criminal organizations.

The gunmen entered the rehabilitation center in Irapuato, in the state of Guanajuato, forced everyone to the ground and shot them, the local secretary of security said. Guns were found at the scene and a photo published by local media showed a cluster of men lying face down in what appeared to be a pool of blood.

“There is a turf war in the state between the Santa Rosa cartel and Jalisco New Generation Cartel,” said Elihú Ojeda, a spokesman for the state prosecutor’s office, in an interview. “We have had a series of events of this type.”

The assault was the latest in a string of high-profile attacks across Mexico, where the government’s inability to curb rising violence has become a national crisis and a political liability for the president.

While many Latin American countries have enjoyed a respite from daily criminality during coronavirus lockdowns, in Mexico, homicides have kept climbing. With more than 3,000 homicides, March was the deadliest month in Mexico since President Andrés Manuel López Obrador took office in 2018.

The wave of violence has devastated Guanajuato, a center for automotive manufacturing and home to the city of San Miguel de Allende, a tourist draw and home to many American retirees. The state, northwest of Mexico City, averages 12 homicides a day, the highest murder rate in the country.

“The situation Guanajuato is facing is very serious,” Mr. López Obrador said in a news conference on Thursday. “There is fighting between gangs, and in the majority of cases it’s aggression between them.”

The president said he wanted to determine “whether there is conspiracy or a criminal association between the authorities and delinquent groups.”

For the last several years, the Santa Rosa de Lima cartel, a criminal group focused on oil theft, has been fighting with the larger Jalisco New Generation Cartel for control over lucrative illicit enterprises in Guanajuato, including drug trafficking. That battle has contributed to thousands of casualties across the state, as homicides more than tripled over the last five years, including several cases of mass killings.

But the attack on the rehabilitation center, called “Recovering My Life,” one of many facilities across the country providing services to addicts without authorization from state authorities, was particularly lethal, even by the standards of the nation’s most violent state.

“We have had events like this all over the state where they shoot at shops, small businesses, private homes where they go in looking for someone, but none of this magnitude,” Mr. Ojeda said.

Last week, Mexican authorities arrested the mother and sister of the leader of the Santa Rosa de Lima cartel, escalating the tensions between the government and organized crime.

Eduardo Guerrero Gutiérrez, a security analyst at Lantia Consultores in Mexico City, said that Wednesday’s attack was likely an attempt by the Jalisco New Generation Cartel to hit their rivals at a moment of vulnerability.

“They smell blood and know that their rival is weak,” Mr. Guerrero said. “So it’s a good moment to launch a more aggressive offensive and possibly finish them off.”

It is not known how many, if any, of the victims at the rehabilitation center had ties to organized crime. Local news reports quoted the mother of one of the killed men, who said that her son was there seeking treatment and had nothing to do with the cartels.

Men seeking treatment for drug addiction have become common targets of mass shootings across the country, in what security experts believe may be attempts at score settling between rival gangs. Just last week, gunmen killed 10 people in a different drug treatment center in Irapuato.

“These are places where the men seeking treatment are often victims of violent attacks,” Irapuato’s mayor, Ricardo Ortiz, said in a news conference on Thursday.

The vast majority of such facilities in Irapuato, he said, are private and unregulated. Some may even be infiltrated by criminal groups. “In some of these facilities, there may be situations where drug cartels are involved,” the mayor said.