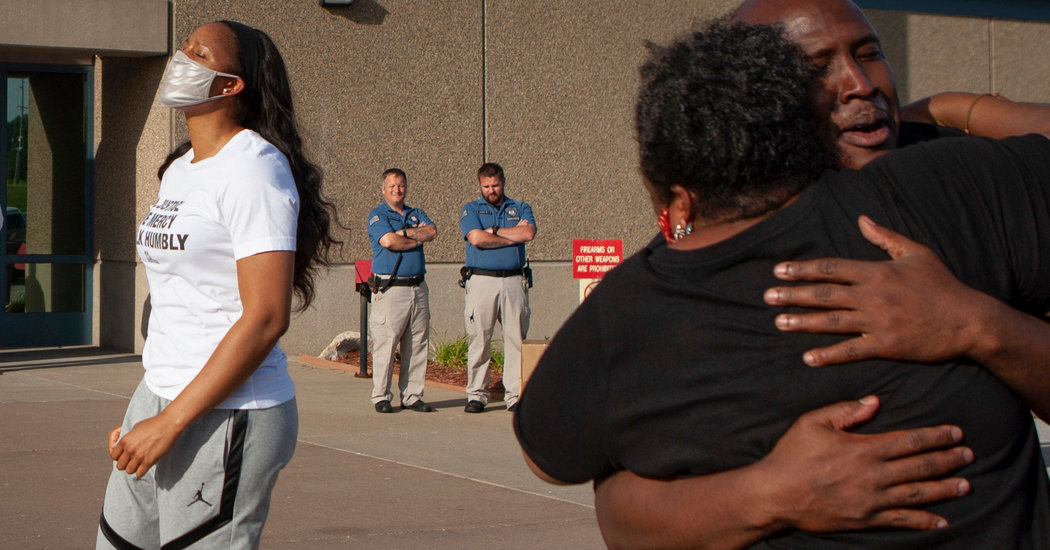 Still in her prime, Maya Moore sacrificed her career, stepping away as one of the greats in basketball for a long shot bid to help free a prisoner she was convinced was wrongfully convicted.

There would be no fifth W.N.B.A. championship, no bid for another Olympic gold medal, no fans gasping at the perfect jump shot.

In a shock to the sport, she left the game — temporarily, she said — in early 2019 to free Jonathan Irons, a Missouri man who continuously claimed innocence as he served a 50-year prison sentence for assault and burglary.

And on Wednesday, her sacrifice paid the ultimate dividend.

Irons, 40, walked out of a Missouri prison a free man after spending 23 years behind bars. After an appeal Moore partially funded and publicly backed, Irons’s sentence had been overturned. In a scene of tearful celebration outside the front doors of the Jefferson City Correctional Center, Moore and her family at long last greeted the man they’ve come to consider one of their own.

Athletes across sports have joined calls for social and racial justice, especially in the most recent wave spurred by deaths of Black people at the hands of the police.

And female athletes like Moore have often been at the forefront but outside the limelight as men, working in leagues with higher television ratings, tend to get the lion’s share of coverage.

“The N.B.A. and N.F.L. get noticed and the accolades, but the W.N.B.A and women in sport so often tend to be ahead of everybody else,” said Victoria Jackson, a sports historian at Arizona State University. “Look at Maya, she essentially gave up her career at a peak moment to put her heart and soul into this.”

Players like LeBron James garnered quick headlines with his backing of Hillary Clinton in the 2016 presidential election, his opening of a charter school in Akron, Ohio, his willingness to snipe back against conservative media pundits who say he should stick to sports.

Colin Kaepernick and his kneeling during the national anthem has made an indelible image as he has remained a powerful, behind-the-scenes force for change while still unable to get a job in the N.F.L. since 2016.

Yet the role of female athletes in this movement, including Moore’s decision to back Irons and campaign for justice reform, seems to cycle in and out of the public consciousness, and is minimized. The reasons lie in a manifold mix that include race, the status of women in our society, and the way that women’s sports still struggle for attention on the sports landscape.

“Part of the reason female athletes who speak out are so easily ignored, why we don’t see or hear what they are doing, is that they barely have a mic to begin with,” says Amira Rose Davis, an assistant professor at Penn State who specializes in race, sport and gender.

“It is hard enough to get women’s sports on TV,” or other powerful media, Davis added. “So it is not really surprising in the moment that female athletes leading the fight for justice so often get overlooked. And that is a shame because these athletes, particularly Black women athletes, have consistently been some of the people taking the most decisive action, willing to sacrifice the most, giving up what crumbs they already have in pursuit of equality and justice.”

Take Ariyana Smith. She was the basketball player at Knox College in Illinois, who in 2014, shortly after a police officer shot and killed Michael Brown in Ferguson, Mo., walked to the court before a game with her hands raised in protest, then fell to the floor for four-and-a-half minutes to symbolize the four-and-a-half hours Brown remained in the street after he was killed. Her display of dissent and public mourning for Brown foreshadowed such protests in collegiate sports.

Players on college football teams like Oklahoma State, Kansas State and U.C.L.A. have received widespread attention over the past several weeks for speaking up against their coaches over issues related to race and their health in a deadly pandemic.

But getting less national attention has been Anna Cockrell, an All-American hurdler at the University of Southern California, who recently announced the formation of a Black student-athlete association and is pressing the tradition-bound private university for change.

There is also Christianna Carr, the Kansas State women’s basketball player who has helped lead Black athletes to threaten to boycott playing until the university takes on-campus racism more seriously.

An entire team quitting en masse in the name of human rights and social justice? That’s what the players on the professional, all-female, Scrap Yard Fast Pitch softball team did after a recent game. They left, for good, in defiance of a general manager who had bragged to President Trump on Twitter that the team was standing during the national anthem, ascribing political intent behind the action.

In a 2017 cover story for Sports Illustrated, Moore, now 31, was called the greatest winner in the history of women’s basketball. It was a nod to her vast collection of championship titles in the Olympics and the pros, and before then at UConn and in high school. But even a performer as superlative as she is has faced constant struggles to be heard.

Shortly before her freshman season at the University of Connecticut in 2007, Moore met Irons through family members who had become close to him through a prison ministry. She and Irons formed a siblinglike bond, and as she learned more about the details of his case she vowed to help him prove his innocence.

She first went public with her decision to leave basketball in order to help free Irons in a short essay in the Players’ Tribune. It took months for her decision to make a deep impression with sports media and fans. When she walked the streets of Atlanta, her adopted hometown, few recognized her.

Her story didn’t garner anywhere near the attention that would have gone to a male player with her level of stature in the sport.

Said Davis, the Penn State professor: “When people are reporting on LeBron or the N.B.A. players doing something for society, and they know they need to nod to a woman they will be like, ‘Oh, and there is also Maya Moore’s work.’ Generally, without deeply considering what it is she is doing and the sacrifice that is required.”

Moore is hardly fazed. Like most female athletes, she is used to fighting against being overlooked.

Four years ago, on the heels of the police killings of Philando Castile in a Minneapolis suburb and Alton Sterling in Baton Rouge, La., along with the murder of five police officers in Dallas by a gunman showing signs of mental health problems, Moore and her Minnesota Lynx teammates engaged in a potent protest. In pregame warm-ups they wore T-shirts with the names of Castile and Sterling, the Dallas police shield, and the phrases “Justice and Accountability” and “Black Lives Matter.”

The move proved controversial — drawing the ire of the W.N.B.A., and prompting four off-duty Minneapolis police officers who worked security at Lynx’ games to walk off the job — but it soon spawned imitators and support from players across the league.

Moore and her teammates were ahead of the curve.