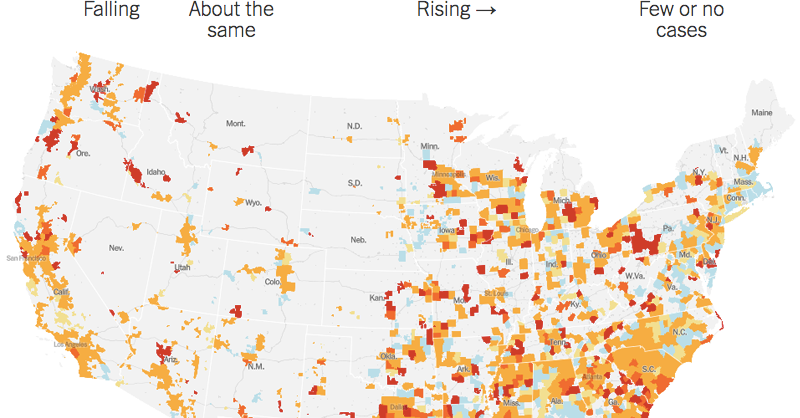 Be safe this weekend

As the virus continues to ravage the U.S., it’s clear that the Fourth of July has the potential to spawn superspreader events. Many cooped-up Americans are eager to leave home and socialize, but the timing for the country’s biggest summer holiday weekend couldn’t be worse: Infections are surging, with some states setting repeated daily records for new cases.

Festivities over Memorial Day weekend, less than a month and a half ago, are thought to have contributed to the dire situation that the country is in now. Mask-free partygoers were seen flouting social-distancing guidelines in places like the Lake of the Ozarks in Missouri, where it will still be business as usual this weekend, with pool parties and widely sold-out accommodations.

But in just one month, the pandemic has spiraled out of control in the U.S. In Florida alone, the tally of new cases ballooned from 667 on June 1 to more than 10,100 today. It is among the 13 states that reported their highest single-day case counts yet this week.

Officials are urging Americans to rethink their holiday plans, and some have taken action to make sure they do so. Los Angeles County has ordered beaches closed and fireworks shows canceled. Nebraska suggested that barbecue hosts should keep guest lists to make contact tracing easier if someone gets sick. In Sacramento County, the health director has worked to stop an annual river-rafting event. “The most patriotic thing they can do this year is to stay at home,” he said.

Even though many events have been canceled or scaled back, there are still plenty of ways to celebrate America’s birthday while staying safe. Here are a few suggestions.

Watch the fireworks. While around 80 percent of fireworks displays have been canceled this year, you can still ooh and aah plenty at your TV or computer screen. Here are a few shows that are sure to delight: the Macy’s fireworks show in New York City; Washington’s “A Capital Fourth” celebration, with performances by Patti LaBelle and Renée Fleming; and Houston’s “Shell Freedom Over Texas,” featuring fireworks and a musical performance by the country singer Pat Green.

Watch a movie about the country’s founding. We recommend a live recording of the Broadway musical “Hamilton” on Disney+; “1776,” a 1972 movie that follows the debates at the Second Continental Congress; or the 1939 adventure film “Drums Along the Mohawk,” which follows a settler couple on the frontier during the American Revolution.

Host a small outdoor barbecue. Depending on where you live (and your comfort level), you might be able to gather together. Our food columnist Melissa Clark set out to do just that, and she found that, while it is possible, it involves a lot of planning and some potentially awkward conversations — including a bathroom strategy. Here’s how she did it, with a minimal-fuss menu.

When in doubt, stay home. If all of these precautions feel overwhelming, or the state of the virus has you feeling justifiably nervous, sit this one out. There will be another Fourth of July next year.

My family and I do road trips around the U.S. every two years, and each time I keep a journal. So now I am writing my first book, “Road Trips With Kids,” in the hopes of encouraging other people to get outside with their children. This is also helping me remember happy times, and look forward to doing beautiful trips again when all this is over.