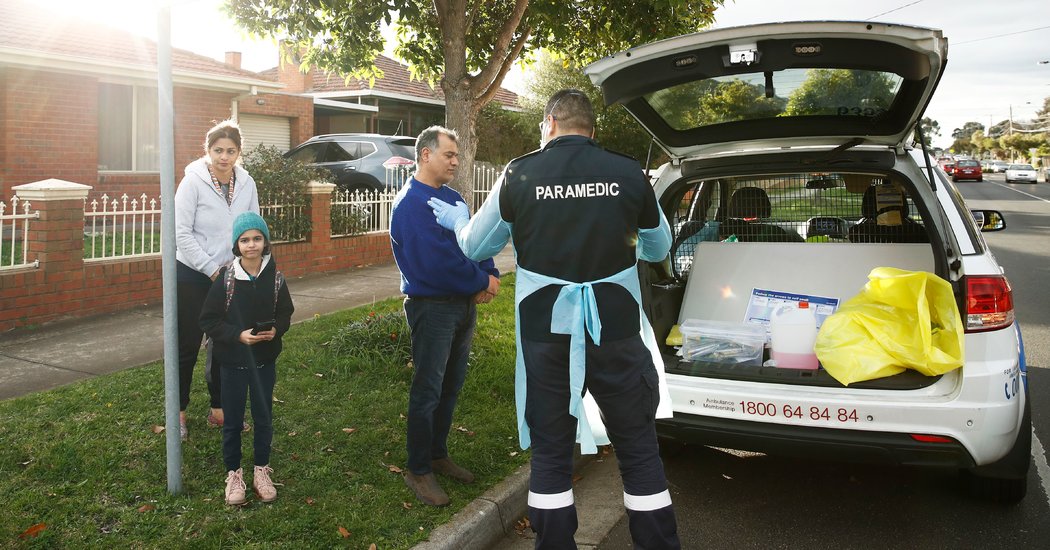 MELBOURNE, Australia — Ring Mayar spends all day knocking on doors in the western suburbs of Melbourne, asking residents if they have a cough, a fever or chills.

Even if they do not, he encourages them to get tested for the coronavirus, as the authorities race to catch up with a string of outbreaks that is threatening to recast Australia’s success story in controlling the spread.

“It’s quite daunting,” said Mr. Mayar, the president of the South Sudanese Community Association in the state of Victoria, who has been volunteering in one of the largely immigrant communities where cases are surging.

The rise in infections — Victoria reported 77 new cases Thursday, the most since March — has driven home the outsized impact of the coronavirus on vulnerable communities. In these places, people often must venture out for jobs that put them at risk of contracting the virus, and communication by the authorities in residents’ native languages can be patchy.

As it has elsewhere in the world, the coronavirus found a hole in Australia’s system: It spread in part because of the sharing of a cigarette lighter among security guards working at a hotel where returning international travelers are being quarantined.

It later circulated in low-income neighborhoods in the Melbourne area with sizable migrant populations, including inside a supermarket distribution center.

The surge shows how even in countries that appear to be on track to safely resume normal life, the virus can quickly resurface. The Victoria outbreaks have stalled the reopening of state borders, undercut plans to create travel bubbles with other countries, and forced 300,000 people back into lockdown.

On Tuesday, the authorities said that people in the 10 worst-affected postal codes would be confined to their homes, except for essential travel, for the next four weeks in an effort to stop the virus’s spread. International flights have been diverted from Melbourne, a city of almost five million people, and an inquiry has been opened into breaches in quarantine protocols.

Officials continued door-knocking and blitz-testing efforts, warning that if residents did not comply, the whole state of Victoria, Australia’s second most populous, could be affected.

“If someone comes to your doorstep and offers you a test, the right answer is yes,” Daniel Andrews, the premier of Victoria, said at a news conference on Wednesday. “If this continues to get away from us, we will all be in lockdown,” he added.

Before the Victoria outbreaks, the country was recording just a handful of new cases each week, and it had begun easing restrictions with the goal of reopening the country by the end of July.

But over the past two weeks, Victoria has had daily double-digit increases in cases. Though this pales in comparison to places like the United States that have tens of thousands of new cases each day, the rise has rattled the Australian authorities, who have held up the country’s extensive testing program, and its early lockdowns, as keys to its success.

The surge in Victoria follows a familiar pattern: Public health officials around the globe have warned that flare-ups are inevitable even in countries that have largely suppressed the virus as restrictions on people’s movement are loosened.

In China, an outbreak linked to a food market struck Beijing last month, and the authorities responded with targeted lockdowns and widespread testing, a model now being followed in Australia. In Singapore, the virus rapidly multiplied in dormitories crowded with migrant workers.

In Australia, the coronavirus has taken hold in culturally diverse pockets around Melbourne where government messaging has not always been effective because of language barriers and other problems like distrust of the authorities. Fears of testing for the virus run high, and people may be less able to stay home from casual jobs when ill.

Some of these areas also experience high rates of homelessness and overcrowding, making it difficult for people to adhere to social-distancing guidelines.

“If some of them don’t go to work, and they’re not on the JobKeeper and JobSeeker, they are left on charity to survive,” said Eddie Micallef, the chair of the Ethnic Communities Council of Victoria, referring to government subsidy measures.

The dangers were foreshadowed in May, when a panel of doctors and experts warned the Australian government that it had missed an opportunity to protect migrant communities.

Mr. Micallef and other community leaders said communication by the state and federal authorities to high-risk groups had fallen short of what would have been necessary to prevent infections. Some said that translated information took too long to reach them, and was not clear.

“You almost need a university degree to try to understand it,” Mohammad Al-Khafaji, the chief executive of the Federation of Ethnic Communities’ Councils of Australia, said of a multipage document on the coronavirus that the government had translated into Arabic.

He and other experts also warned that lockdowns enforced by the police — especially at a time of global scrutiny of police abuses — may only harm communities already wary of the authorities and exacerbate their sense of isolation.

“We have to get people to understand the importance of being home. That’s not through fines and that’s not through over-policing,” said Rebecca Wickes, an associate professor of criminology and the director of the Migration and Inclusion Center at Monash University in Melbourne. “That’s not going to create the behavior change that we are looking for.”

She added that while a first wave of racism related to the coronavirus had targeted people of Asian descent, a second wave against migrant and ethnic communities was emerging because of misconceptions that these groups did not heed public health advice.

Leaders in the Islamic community also said they worried that anti-Muslim sentiment had risen after reports that one of Melbourne’s clusters had originated at an Eid celebration last month.

It is not these disadvantaged communities that deserve blame, Professor Wickes said, but rather the “global citizens, coming back from their cruises and their ski trips to Aspen. We seem to have forgotten the history of how this virus took hold in Australia.”

For Mr. Mayar, eliminating both the stigma of the virus and the racism that can accompany it comes with every rap on a door: Though he wears gloves, and is careful to keep six feet of distance between himself and the residents, he does not wear a mask.

He acknowledges the risks involved. “But in the end we are humans, and we don’t want to look at one another like aliens,” he said. “Even if we do encounter someone who is ill, we need to show our compassion.”