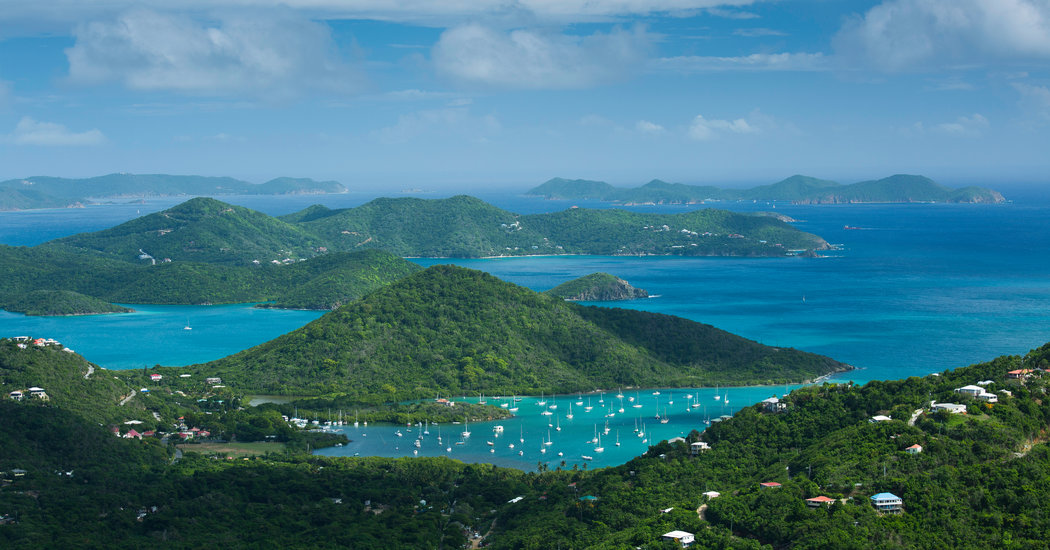 The Covid-19 pandemic struck the Caribbean at the height of high season, when snow birds, primarily from the United States, pack the beaches for winter and spring break, and provide the revenue to see resorts and sometimes entire countries through the lull of summer and fall.

But in recent years, islands like Puerto Rico and the Bahamas have developed a strong summer business, fueled by bargain seekers, adventure travelers and families.

Now, as the region begins to reopen to international travelers, it faces not just the challenge of the pandemic, but the financial blow dealt by the absence of cruising and the onset of hurricane season.

Excluding Guyana, the Caribbean economy is expected to contract by 3 percent in 2020, according to the World Bank.

“We’re not fooling ourselves. We fully expect to see a slow return of travel,” said Frank Comito, the chief executive and director general of the Caribbean Hotel & Tourism Association, which represents 33 national hotel associations in the region. “We expect those that do open up in the coming months will take some time to see hotel occupancy levels even approach 50 percent.”

As countries reopen, most are mandating face masks indoors and social distancing.

Other restrictions vary widely. Aruba will reopen to Canadians, Europeans and most Caribbean nationals on July 1, and to visitors from the United States on July 10. St. Maarten has announced its airport will reopen July 1 as long as Covid-19 cases remain at zero. The Cayman Islands, a nation much less reliant on tourism (about 30 percent of its economy) compared to many of its neighbors, will wait until September. St. Barts is among several islands requiring a negative Covid-19 test of arrivals or offering one on the spot (for 155 euros, or about $175). Bonaire and Curacao will reopen July 1, to some Europeans.

“The U.S.A. is not part of this reopening phase due to the fact that it is still considered high risk,” according to a letter from Bonaire tourism to its travel partners.

As governments have clarified their policies, airlines, including American, Delta, JetBlue and Southwest, plan to resume service to many Caribbean destinations in July.

When they do, they’ll be flying into a hurricane season that the National Oceanic and Atmospheric Administration predicted could be above normal. In May, it forecast 13 to 19 named storms, including three to six major hurricanes at Category 3 and above.

The region has been experiencing above-normal storm levels since 1995 because of warmer ocean temperatures, weaker trade winds and other factors.

Caribbean nations, perennially watchful, hope to salvage a summer season before the peak of storm season in September.

“We’re hoping to get going June, July and August to give the economy an injection we need and then hopefully get through hurricane season,” said Joseph Boschulte, the commissioner of tourism for the United States Virgin Islands.

The following are plans for five island destinations reopening now.

On July 1, the Bahamas plans to enter Phase 2 of its reopening, welcoming overseas visitors. Travelers age 2 and older must present a negative Covid-19 test taken within 10 days of arrival. They must also submit an electronic health visa that asks questions, including where they have traveled in the last six weeks, and receive clearance to travel.

“As we look at the return of tourism, all data is showing Americans are interested in domestic travel, but because of proximity they are considering the Bahamas a domestic stop,” said Joy Jibrilu, the director general of the Bahamas Ministry of Tourism, adding that 82 percent of visitors are from the United States. “That’s working to our advantage.”

Some resorts, including Baha Mar, the luxury development on Nassau, will remain closed until October.

But the Bahamas’ largest resort, Atlantis Paradise Island, plans to reopen beginning July 7. By mid-month, it expects to have nearly 60 percent of its 3,786 rooms open. Its water park and dolphin swim facilities will be open along with its casino and 20 restaurants.

Normally, July and August are two of the resort’s busiest months, attracting families on summer vacations.

“We recognize not everyone will be comfortable initially traveling,” said Audrey Oswell, the president and managing director of Atlantis. “If we get to 50 percent occupancy, I’d be thrilled.”

Jamaica reopened its borders to international visitors on June 15, with guidelines to be reviewed every two weeks. Currently, visitors must be preapproved for entry via an online travel authorization that assesses an applicant’s health risk. Beginning July 10, travelers from areas deemed high risk — currently those areas include Arizona, Florida, New York and Texas — must show proof of a negative Covid-19 test taken within seven days of arrival.

Travelers are restricted to a newly designated “Resilient Corridor” along the north coast from Negril to Portland (a second corridor in the area of the capital of Kingston is open to business travelers).

Properties that are allowed to reopen must pass a Covid-19 Compliant test, which includes protocols such as sanitizing public touchpoints like elevator buttons every two hours, installing automatic doors or a person to open and close doors, and moving as many activities as possible outdoors.

Resorts are reopening gradually. Sandals Montego Bay reopened June 16; five more Sandals siblings will roll out through October. The Tryall Club, the 2,200-acre property with 75 rental villas in Montego Bay, has announced it will reopen Aug. 1. The all-inclusive Sunset at the Palms in Negril plans to reopen July 9. The 55-room boutique Jamaica Inn in Ocho Rios has yet to name its date, though management expects it may be in late July.

“We don’t feel we have the level of demand to warrant opening,” said Kyle Mais, the general manager of the Jamaica Inn. “Airlines are a big part of the formula. We’re seeing more demand in the later part of the month as more flights are being announced.”

Puerto Rico has announced it will reopen for inbound tourism on July 15. Arriving travelers will have to show the results of a negative Covid-19 test taken within 72 hours, or be tested on site and, if positive, go into quarantine for 14 days at their own expense.

Beaches on Puerto Rico are open, though the island-wide curfew, in effect from 5 a.m. to 10 p.m., has been extended to July 22. Restaurants are operating at 75 percent capacity and casinos, set to reopen July 1, are administering temperature checks at entry.

To encourage travel, several hotels are offering deals, including the Caribe Hilton in San Juan, which is offering a three-night stay for the price of two through the end of the year (from $199 a night).

This year will undoubtedly be an anomaly in San Juan, which normally hosts more than 500 cruise ships a year. A quieter Puerto Rico might interest some visitors, but it’s a financial blow to the island that sustained devastating Hurricane Maria in 2017 and, earlier this year, a cluster of earthquakes.

“The summer tourism season has evolved and isn’t solely dependent on locals any more, but this year local tourism is going to restart tourism engines here on Puerto Rico,” said Brad Dean, the chief executive of Discover Puerto Rico, which promotes tourism on the island.

Saint Lucia officially reopened its borders on June 4 and expects its first international flights the first week of July. Arriving passengers must provide the results of a negative Covid-19 test taken within 48 hours of arrival.

About a dozen hotels on the island have applied for a new, required Covid-19 cleaning certification that includes protocols for sanitizing luggage on arrival, maintaining a nurse’s station, updating housekeeping standards, dispensing hand sanitizer and reorganizing dining areas to meet social-distancing requirements.

The Moorings, which offers crewed and bareboat yacht charters, will reopen its St. Lucia base on Aug. 1 with disinfected boats, linens provided in sealed bags and the advice to passengers to bring their own snorkel gear as it will no longer be provided.

“Saint Lucia is fortunate to have strong occupancy year-round and a number of hotels are keen to reopen because they still have business on the books,” said Karolin Troubetzkoy, the president of the Saint Lucia Hospitality & Tourism Association.

On June 1, the United States Virgin Islands entered the fourth of its five reopening phases, which include welcoming tourists who must undergo temperature checks and health screenings upon entry.

Tourism authorities are hoping that the increase in scheduled flights in July and the recent reopening of such high-profile resorts as the Ritz-Carlton, St. Thomas will encourage travelers to take a summer vacation in the islands.

“The U.S.V.I. is ripe to benefit from people who want to stay under the U.S. flag,” said Mr. Boschulte, the tourism commissioner.

Until the pandemic, the islands were on track to host 1.5 million cruise passengers this year, 1.4 million of them to St. Thomas. While many of the ship-dependent shops on the main street in the capital of Charlotte Amalie remain closed, other businesses are carrying on.

“Our key restaurants are open with proper precautions and Gladys’ callaloo soup is as great as ever,” said Gerard Sperry who guides St. Thomas Food Tours, naming a popular downtown restaurant.

On St. Croix, the Buccaneer resort remained open throughout the pandemic to essential workers and reopened to tourists June 1 with a glass shield on the front desk, restaurant capacity reduced by 50 percent and a closed bar, though cocktails may be delivered to your chaise longue.

“We are seeking a very specific guest who puts their safety and the staff safety as their number one concern,” said Elizabeth Armstrong, the general manager and third-generation owner of the resort where occupancy may hit 35 percent in July.