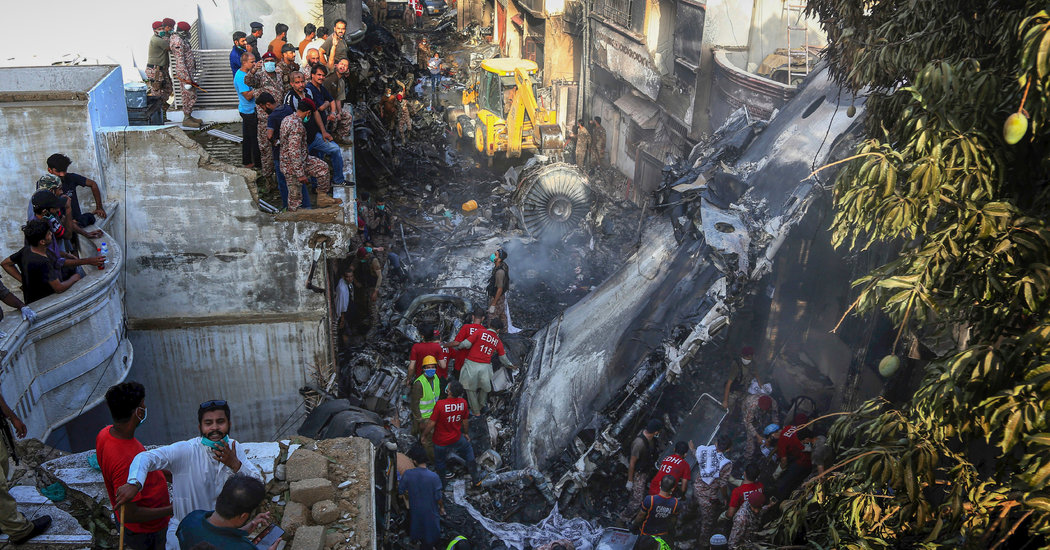 ISLAMABAD, Pakistan — The European Union’s announcement that Pakistan International Airlines would be barred from flying into Europe for at least six months is the latest blow to the country’s national flag carrier, which has been mired in financial and administrative troubles and has come under scrutiny after a crash in May that killed 97 people.

The decision on Tuesday by the European Union Aviation Safety Agency to temporarily ban Pakistan International Airlines followed revelations last month by the Pakistani aviation minister, Ghulam Sarwar Khan, that a large number of pilots there and at other airlines had dubious credentials. Pakistan International has now grounded 150 of its pilots and an inquiry is underway to review their licenses and other documentation.

The European air safety agency said the airline “is currently not capable to certify and oversee its operators and aircraft in accordance with applicable international standards.”

The May 22 crash of an Airbus A-320 carrying families set to reunite after two months in lockdown to spend the Eid al-Fitr holiday together was the latest in a series of air disasters for the airline.

The pilots had disregarded several warnings that they were flying too low on the approach to the Karachi airport, according to the investigation into the crash.

The airline has long been criticized as being overstaffed, has a reputation for lax quality control, and many appointments are seen as a result of political pressure or nepotism. Repeated efforts by successive governments to make it financially viable have failed, and it is running into a loss of around 6 billion rupees, or about $36 million, per month, officials say.

Pakistani officials have described its financial situation as a “bottomless pit.”

The crisis at Pakistani International Airlines has touched union workers to its top executives, who have been removed regularly over corruption charges or the propriety of their appointments. In 2018 the Pakistani Supreme Court removed Musharraf Rasool as chief executive because he didn’t meet the criteria for the job and lacked aviation experience; his replacement, Bernd Hildenbrand, a German national, was also forced out over similar accusations and corruption allegations.

The current chief executive, Arshad Malik, serves as an air marshal in the Pakistani Air Force. He was brought in with high hopes in 2018 to revive and revamp the national carrier, but he came under a cloud himself this year when the Supreme Court raised questions over the legality of his appointment. He was allowed to continue working.

Critics of the airline say that the pilots have unionized and resist efforts to overhaul work rules.

The examination system for pilot licenses was changed in 2012 by the Civil Aviation Authority, which itself has been accused of failing to uphold regulatory standards. The new process involves taking several theoretical tests — and many pilots have reportedly tried to get around it by either cheating or paying others to take the tests in their place.

Capt. Chaudhry Salman, the head of the Pakistan Airline Pilots’ Association, disputed Mr. Khan’s claims in a news conference in Karachi last week. “There is no truth to these allegations,” Mr. Salman said.

The pilots have their own set of complaints and grievances. Last year, representatives for Pakistan International pilots accused the airline of violating safety rules and putting the pilots at risk. They said that pilots were overworked, lacked sufficient sleep and suffered from fatigue, and said that the airline was scheduling flights in a way that put aircraft and passengers’ safety at risk.

Former Pakistani International staff members said they were saddened by the dismal state of affairs at the airline.

Hamood Alam, a former official who is now working with another airline in the Middle East, said in an interview that he had never felt so much “shame, humiliation and anger.”

Mr. Alam said it was common knowledge that many pilots were not following standard operating procedures and rules at Pakistani International and other domestic airlines.

“Even the most qualified pilots don’t follow the S.O.P.s,” he said. “But the general public has come to know about this because it sadly ended in a crash,” referring to the accident in May. “It is a miracle that we don’t have more crashes.”

He blamed it on a “deep-rooted societal issue, where the elites and powerful” have “full conviction that the can get away with anything and that all these rules are for someone else to abide by.”

As an example, Mr. Alam cited the rule that when an aircraft descends below 10,000 feet, a “sterile flight deck” is required, meaning there should not be any exchange of information or discussion between crew members and with controllers other than that related to the landing profile.

“Do you think any Pakistani pilot abides by this?” he asked.

The pilots in the May 22 crash were discussing the coronavirus during the approach, the investigation found.

The inquiry into the crash and pilot credentials has become politically charged.

Opposition politicians and critics of Prime Minister Imran Khan said the government handled the post-crash situation in a tactless manner. The hurried revelations by the aviation minister — without having carried out a proper investigation — have caused a global embarrassment, they say.

Supporters of Prime Minister Khan, on the other hand, say the shock was necessary to jolt the system and instigate much-needed reforms.

There is a debate within the country about privatizing the national airline. Aviation professionals, like Mr. Alam, agree.

“It gives me no pleasure to say but I’m convinced for quite a long time that the situation and the culture prevailing in PIA is such that it is not possible to bring it back to the global industry standards,” Mr. Alam said. “The only way is to stop PIA operations, break down the assets and infrastructure into viable units, bring some internationally reputed professionals to built a new airline from scratch and make a brand-new airline, with a new culture.”