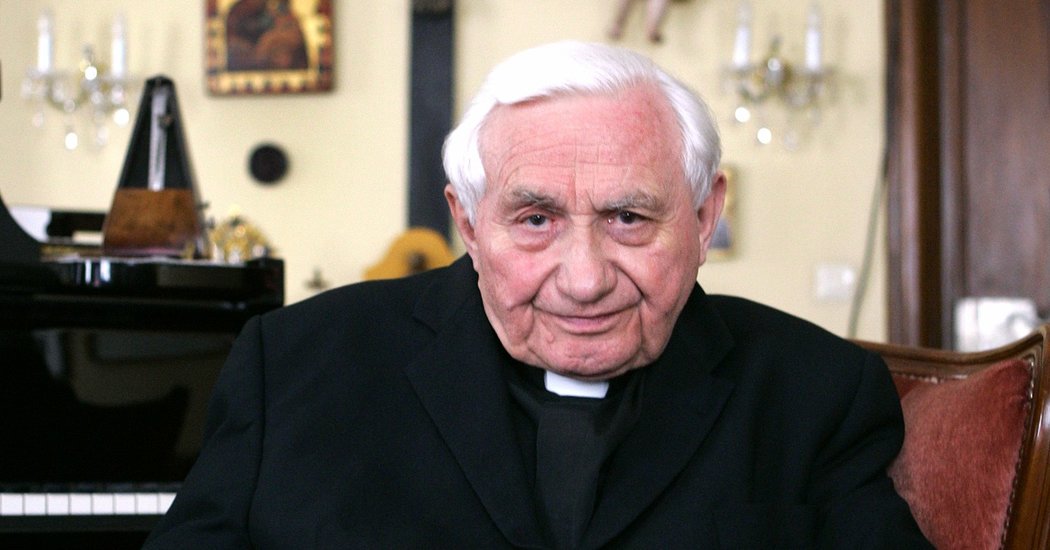 The Rev. Georg Ratzinger, a Roman Catholic priest and celebrated choirmaster who was the older brother of Benedict XVI, the pope emeritus, died on Wednesday in Regensburg, Germany, where he had lived for most of his life. He was 96.

His death was confirmed by the diocese in Regensburg. Father Ratzinger had been suffering from a serious illness, which the diocese did not identify. Benedict traveled from the Vatican to see his brother in Germany last month.

While Father Ratzinger had a lot in common with his younger brother — they were ordained to the Catholic priesthood the same year, and they both played piano — the elder Ratzinger had a career independent of the Vatican, the world that so consumed his brother’s life.

After studying music in Munich and serving as a choral director in various German churches, Father Ratzinger became the music director at the 10th-century St. Peter’s Cathedral in Regensburg, a city about 75 miles northeast of Munich. He served as choirmaster of one of Europe’s great children’s choirs, the Regensburg Domspatzen — Domspatzen means Cathedral Sparrows — from 1964 to 1994.

He led the choir on concert tours to the United States, Scandinavia, Canada, Taiwan, Japan, Ireland, Poland, Hungary and the Vatican. He also oversaw the professional recording of numerous works, including J.S. Bach’s “Christmas Oratorio” and Heinrich Schütz’s “Psalmen Davids.”

In 1977, Father Ratzinger conducted the choir at his brother’s consecration as archbishop of Munich and Freising. Joseph Ratzinger was named a cardinal shortly after and became Pope Benedict XVI in 2005, after the death of Pope John Paul II.

Father Ratzinger was also the author of “My Brother, the Pope” (2011), an as-told-to memoir written with Michael Hesemann. He told Mr. Hesemann that the dynamics between the siblings shifted after 2005. He fondly recalled that for much of his life, Joseph Ratzinger would introduce himself as “the little brother of the famous choral director.” But after the conclave that made his brother pope, he added, he became known primarily as “the brother of the pope.”

The reminiscence was a bit overstated; even before he emerged as pope in 2005, Cardinal Ratzinger was well known on the world stage as John Paul’s theological enforcer of strict positions on doctrine, morality and the primacy of the faith. He carried out that role for more than two decades as the prefect of the Vatican’s Congregation for the Doctrine of the Faith, once known as the Holy Office.

In 2010, long after Father Ratzinger had stepped down as choirmaster, several of the boys who sang at the Regensburg cathedral charged that they had been systematically abused by the staff. At the time, Father Ratzinger apologized for slapping boys during his tenure. He said he stopped administering corporal punishment when the church banned it in 1980.

The choir later started an investigation and hired a lawyer, Ulrich Weber, to look into further allegations of beatings, torture and sexual abuse. Mr. Weber concluded that more than 500 boys had been abused over several decades. Father Ratzinger was not implicated in the report. Asked at a 2016 news conference whether the choirmaster knew of the abuse, Mr. Weber said, “After my research, I must assume so.”

A few days later, Father Ratzinger gave an interview to a Bavarian newspaper, Passauer Neue Presse, and denied any knowledge of the abuse. “I did not hear anything at all about sexual abuse,” he said. “I was not aware that any sexual abuse was taking place at that time.”

Georg Ratzinger was born on Jan. 15, 1924, in Pleiskirchen, Bavaria, to Joseph Ratzinger, a police officer, and Maria (Peintner) Ratzinger, who, before getting married, worked as a cook and housekeeper. Georg was the second of three children; he had an older sister, Maria, who died in 1991, and his brother, Joseph, was born in 1927.

The family moved several times because of the father’s work and, later, because of his outspoken opposition to Hitler. “Our parents made no secret of the fact that they were anti-Nazi and despised Hitler wholeheartedly,” Father Ratzinger wrote in the memoir.

The senior Joseph Ratzinger often worked on Sundays, and when he wasn’t working he loved to sing in the church choir. “I must admit,” Father Ratzinger wrote, “we seldom went to Mass together.” Most of the family praying, he said, came at the dinner table:

“Every day we prayed together, and in fact before and after each meal (we ate our breakfast, dinner and supper together). The main prayer time was after the midday dinner, when the particular concerns of the family were expressed.”

“As early as 1938,” Father Ratzinger wrote, “we were registered by the seminary with the Hitler Youth.” It was the law, he said. “There were no exemptions.”

Both young seminarians were later conscripted into the German Army. Georg was shot through the arm in a firefight with American troops in Bolsena, Italy, on June 12, 1944. He was held as a prisoner of war by the United States Army in the Naples area before being released in 1945 and returning to Germany.

The brothers remained close, and the younger one taught at the University of Regensburg before he was named an archbishop. In the 2011 memoir, Mr. Hesemann asked Father Ratzinger if the two priests watched television together at the Vatican.

“Well, before the news, there used to be a television series ‘Inspector Rex.’” Father Ratzinger replied. “We always used to watch it, because we like dogs, too. We are well acquainted with Herr Helmut Brossmann, the owner of the German shepherd Rex, who plays the title role. He lives in the vicinity of Regensburg.”