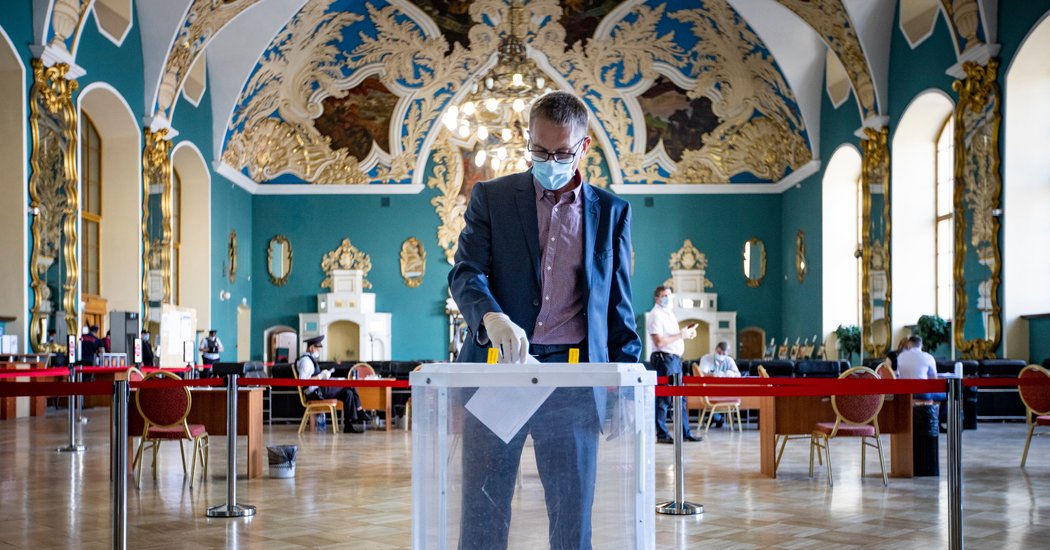 MOSCOW — The outcome of Russia’s six-day national plebiscite, intended to keep President Vladimir V. Putin in power until at least 2036, is all but certain: Mr. Putin will get the numbers he needs after a final day of voting on Wednesday.

Less clear, however, is why he even needs voters to approve a raft of constitutional amendments that, already approved by the national parliament in Moscow and regional legislatures across the country, entered into law months ago.

“From a juridical point of view, this whole exercise is insane,” said Greg B. Yudin, a sociologist and political theorist at the Moscow School of Social and Economic Sciences. But, he added, “it is not at all a meaningless procedure,” because Russia’s system under Mr. Putin depends on the appearance of popular support to confer legitimacy on decisions he has already made.

“It is theater, but very important and well-played theater. The system needs to stage displays of public support even when it doesn’t have it,” Mr. Yudin said. “This vote is putting Putin’s theatrical techniques to the test.”

In a final melodramatic flourish on Tuesday, Mr. Putin addressed the nation against the backdrop of monuments to Soviet soldiers killed fighting Nazi Germany, assuring voters that their voices mattered, no matter that the scores of amendments they were being asked to vote on have already been enacted and the amended constitution has been published and is on sale in book stores. “The voice of each of you is the most important, the most significant,” Mr. Putin said.

Voters could, in theory, reject the amendments, and Mr. Putin has pledged to honor their decision. But the chances of that happening are minuscule, not least because of what Golos, an independent election monitoring organization, described on Tuesday as an electoral process rigged from the start.

Golos said the vote, unfairly skewed by a noisy one-sided propaganda campaign by state-controlled media and blatant pressure from a sprawling galaxy of state-funded companies and organizations, does “not allow us to talk seriously about the possibility of the will of the people being expressed.”

The state’s vast reach and resources have allowed it to mobilize people like Lyudmila Savinkina, the editor in chief of Yegoryevsk Today, a small state television station in a town southeast of Moscow. In a recording obtained by Golos, she ordered her staff not only to vote but to make sure they voted in the town of Yegoryevsk, no matter where they are usually registered. (Local officials risk losing their jobs if they fail to mobilize enough voters in their own districts.)

For those who disobeyed, the editor told her staff, there would be consequences. Those, she said, “may vary, I’m just warning you. And this concerns both you and me. I will not even explain it to you. Everyone can lose jobs, bonuses — and this amid a pandemic, when many people have already lost their jobs.” Ms. Savinkina did not respond to telephone calls seeking comment.

For weeks, a long parade of prominent Russians who depend on the state for their positions and income — from actors and musicians to the head of the Hermitage Museum in St. Petersburg and the patriarch of the Russian Orthodox Church — have paraded across state television urging people to vote.

Curiously, none of them mention the core of the exercise: an amendment that allows Mr. Putin to crash through constitutional term limits in place since 1993 and stay in power virtually for life, rather then stepping down at the end of his current term in 2024. They instead focus on other changes, like enshrining the protection of pensions, family values, animals, the Russian language and the memory of Russians killed in World War II.

The yes-or-no vote is a package deal, which means that anyone who believes in the sanctity of Russia’s war dead — a huge number in a country that lost more than 20 million lives during what is known as “the Great Patriotic War” — will most likely tick yes and, in doing so, endorse the idea of letting Mr. Putin, now 67, stay in the Kremlin at least until he reaches the age of 83.

Aleksei A. Navalny, Russia’s most prominent opposition leader, has denounced the exercise as a “shameful farce” that has been “specially designed to cheat and deceive the public.”

Mr. Navalny fired his most vitriolic comments at the mostly over-the-hill celebrities who, reliant on state-funded gigs, have joined a feverish campaign to get out the vote. He called them “revolting, vile and disgusting people” who “are lying cheating the public for money.”

One of his targets was Oleg Gazmanov, a singer who has often been hired to entertain officials, including Mr. Putin at a celebration honoring secret police officers. In his pitch to voters on television, Mr. Gazmanov made no mention of Mr. Putin staying in power for 16 more years but stressed the importance of voting to prevent “trampling on the memory of our heroes, desecrating the graves of our ancestors.” He recalled that his own father had fought all the way to Berlin in 1945.

By contrast, many bloggers, “influencers” and other internet celebrities are turning down payments to mention the amendments, fearing that any hint of praise for Mr. Putin would ruin their image with their young audiences and crush ad sales.

After four days of voting, the state-controlled Russian polling organization, VTsIOM, published an exit poll on Monday that showed 76 percent of voters backing the amendments. The Central Election Commission reported on Tuesday that nearly 50 million voters, not far short of half the total number, had already cast ballots.

Wednesday, the final day, has been declared a national holiday in a bid to further increase turnout and validate the success of Mr. Putin’s show.

The near certainty of the final outcome, in Mr. Yudin’s view, reflects the nature of Russia’s “plebiscitary democracy,” a system that revolves around a single, unchallenged leader but still requires regular cries of “public acclamation to give it legitimacy.”

The Kremlin’s primary objective now, he said, is less to get public approval for amendments that have already been approved than to give Mr. Putin a fresh jolt of legitimacy at a time when, with Russia’s economy severely damaged by the coronavirus pandemic, his approval rating has slumped to its lowest level since he came to power 20 years ago.

To ensure that this happens, the Kremlin has pulled out all the stops. Voters have been lured to polling stations by prize lotteries, grocery vouchers, clown shows and other attractions.

There have been scattered reports of outright fraud, but more significant has been the forced mobilization of the large number of voters whose livelihood depends, one way or another, on staying on the Kremlin’s good side.

Employees at state-funded libraries in St. Petersburg complained that they had been ordered by their institutions to vote and on which day. Boris L. Vishnevsky, a St. Petersburg academic and opposition member of the local council, described this as a “gross violation of labor law,” saying that “employees have no obligation to vote if they don’t want to.”

Some people have balked, like Vladimir Zhirinov, a young journalist who said this week that he was resigning from a state television station in the Siberian city of Krasnoyarsk, because “what is happening is beyond my comprehension.”

“I cannot just nod: ‘Yes, everything has already been decided, nothing depends on us,’” he said.

In the final days of the vote, officials and state media outlets have gone on the offensive against claims of fraud posted on social media, some of which are clearly fake. One of those showed ballot papers pre-marked with invisible ink that later became visible. The clip was filmed during an election years ago in Kazakhstan.

More plausible accounts of jiggery-pokery have come from opposition members of local election commissions, including one in the Moscow district of Ramenki, who reported a suspicious surge in undocumented voting from home. In the Lefortovo district of the capital, a man and his wife turned up to vote at their local polling station and found that they and their two children were registered as having already voted.

For those unwilling to play their allotted roles, the television editor in Yegoryevsk had some simple advice: “I’m sorry, we live in this country. As I have said earlier, if you don’t like it, move to other countries. And that’s it, all issues will be solved at once.”